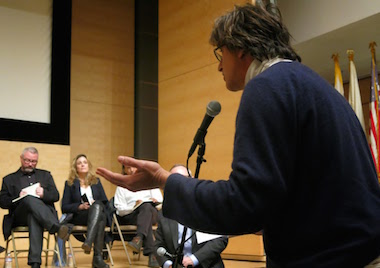 More than 225 filmmakers met Jan. 17 with representatives from PBS, New York’s WNET, POV and the Independent Television Service in what was billed as the first stop in a “listening tour” examining public TV’s commitment to independent film.

Filmmakers challenged PBS to make good on its stated commitment to showcase their work by designating Independent Lens and POV for common carriage. The series, both of which are devoted to independent film, are fed to stations Mondays at 10 p.m., but local stations can schedule them at other times.

A recent decision by WNET, PBS’s flagship station in New York, to reschedule the two series prompted filmmakers to push PBS to give a higher profile to their work. The filmmaking community, organized by listening tour co-sponsor Indie Caucus, contend that WNET’s schedule change would demote independent film to fringe time slots and reduce viewership in the nation’s largest media market.

WNET agreed to postpone the schedule change for four months, a decision that ITVS President Sally Jo Fifer described during the San Francisco meeting as “hitting the pause button.”

The Indie Caucus helped to shape the agenda in San Francisco by distributing a handout detailing what filmmakers want to see in PBS’s new strategy:

One of the first filmmakers to step to the microphone was Gary Weimberg, a prolific documentarian who has presented three films on POV. “Without common carriage,” Weimberg said, “we cannot get publicity for our films. Our three films on POV were successful precisely because we had a unified airdate. . . . We are filmmakers of passion and we have to connect to our natural communities, and the broader communities, and publicity is the way that happens.”

Turning to WNET’s representative at the meeting, Norman of American Masters, he said: “Please tell people at WNET that denying common carriage is like a stab in the heart for independent filmmakers.”

Neither POV nor Independent Lens are designated for common carriage, said Beth Hoppe, PBS’s top programmer, who described local flexibility in scheduling as a plus for independent film. Each PBS station has the power to schedule the two series where they want to, she said, and they can air them “as often they want to.” PBS wants stations to air independent films “over and over again.”

Her objective for the listening tour, she said, is to work with the independent film community “to come up with a strategy together that everybody will buy into, including every public television station in the country, including putting some money into promoting each and every film.”

“There’s been this idea in the system that if you couldn’t spend a huge amount, don’t spend anything,” Hoppe said. “We don’t believe that anymore.”

“I’m aware of the difficult decisions you have to make,” said Tabitha Jackson, director of the Sundance Institute’s Documentary Film Program and Fund, addressing the panelists. “With my Sundance hat on, I wish to say that we support independent filmmaking because it is an expression and a reflection of who we are and what it’s like to be alive in this world.”

Susan Stern of New Day Films, a distribution cooperative representing “more than 150 filmmaker members,” thanked “PBS, ITVS and all of you for keeping PBS alive — because we know you’ve been fighting.”

Turning to the concerns of her constituents, Stern continued: “What we’ve been hearing from our members and other documentary makers is that common carriage in prime time is the baseline. We need that.” Independent documentary films bring diversity to public TV as well as a venue for “pushing the boundaries,” she said. “We want to work with you, because we think the audience is there. We think that’s what people want.”

Speakers repeatedly used the word “trust” and the phrase “walk the walk” when responding to the panelists’ frequent expressions of support for documentary filmmakers. Ellcessor asked Hoppe to respond to the skepticism veiled within the remarks. PBS’s programming chief praised the audience of “creative people, teachers, community activists” and emphasized, “I watch all the work that you are doing, and we need film to do the work that we are doing.”

“We are interested in narrative that helps us propel major social change,” Hoppe said. Citing the Independent Lens film inspired by the Nicholas Kristof and Sheryl WuDunn book, Half the Sky: Turning Oppression into Opportunity for Women Worldwide,” Hoppe continued, “There is a direct correlation between what you all do and giving us the tools to change the world for the better. . . . We need you.”

Two similar “listening tour” meetings are in the works: a New York event planned for February and another in Chicago slated for March. In addition, organizers of two major film events plan to examine the relationship of independent filmmakers and public TV: during the Sundance Film festival, which opens Jan. 22 in Park City, Utah, and at the Media That Matters conference in Washington, D.C., Feb. 19.

After the San Francisco meeting, filmmaker Tracy Droz Tragos expressed both skepticism and optimism about PBS’s pledge to strengthen independent film. Her documentary Rich Hill debuted this month as the season opener for Independent Lens, and its broadcast debut in New York had been jeopardized by the original timeline for WNET’s schedule change.

“It is somewhat hard to believe in the commitment to independent film, POV and Independent Lens, when that kind of stuff happens,” Tragos said, referring to the dispute with WNET, which she described as “a violation of trust.”

“I think there’s every reason public television should be behind independent film and the diverse voices it represents . . . , but as some people in the audience indicated, there’s ‘talking the talk’ and ‘walking the walk.’”

Still, as a representative of the Indie Caucus she believes the tour “has the potential to be incredibly meaningful. ”

“I remain cautiously optimistic, but there is so much at stake,” especially the clock that’s ticking down to WNET’s postponed schedule change. “There is a real opportunity for PBS to show leadership and make choices. Will they make those choices? The jury is still out. . . . I’m hopeful that PBS will move forward in a way that is clear and committed.”

Douglas Cruickshank’s book Somehow: Living on Uganda Time was published in 2014. He recently released two anthologies of essays. For more information about Cruickshank and his work, visit his website.
Correction: A previous version of this post incorrectly reported the job title of Lesley Norman, production executive at WNET.
ShareTweet EmailPrint More