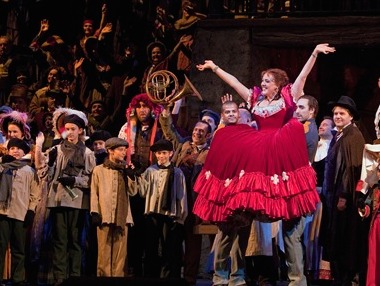 About 300 radio stations, most of them public, air live weekend broadcasts of the Met from December to May each year. But a weeks-long dispute between Met management and the 16 unions that represent its many workers threatens to end in a lockout, potentially jeopardizing the Met’s upcoming broadcast season.

Negotiations have dragged on following a July 31 contract deadline, with both parties granting extensions to postpone a lockout. Their next deadline is Aug. 17. Meanwhile, the Met’s 2014-15 season is scheduled to open Sept. 22 with The Marriage of Figaro, and its 84th season of Saturday broadcasts is slated to start Dec. 6.

Peter Gelb, the Met’s general manager and a credited producer on PBS’s Met productions, is asking to cut workers’ pay by 17 percent to help offset a nearly $3 million deficit. The Met’s operating budget is more than $300 million, and it spends more than two-thirds of that on pay and benefits, according to the company.

A Met spokesperson would not comment on whether the company would continue offering programming in the event of a lockout. It could offer rebroadcasts of past performances in the event of a strike. But stations would have to determine whether accepting programming from a cultural institution that has locked out its workers would be akin to siding against the workers.

George Preston, g.m. of classical station KCME in Colorado Springs, Colo., told Current he would consider airing archival Met programs if they were offered in place of a new season. But he’d first check with friends who work as orchestra players and choristers at the Met to make sure the move wouldn’t upset the opera community.

“I would probably call a few of them up and say ‘How would you interpret this?’,” he said. “If I heard strongly from any of the artists involved that they would really consider broadcast of an archival season to be crossing a picket line, so to speak, that would weigh pretty heavily with any decision I would make.”

In the event that Met broadcasts are interrupted, stations will have a backup option. The WFMT Radio Network is compiling six months of opera and classical performance programming that could replace the Met’s offerings. The Chicago-based classical distributor is in talks with opera venues in Chicago, Milwaukee, Detroit and elsewhere to offer broadcasts of their productions to stations and also has access to performances offered via the European Broadcasting Union.

“It’d be a lot of work, and we’d really have to scramble to do it right,” said Steve Robinson, WFMT executive v.p. for radio and project distribution. The distributor would prefer that the Met resolve negotiations and preserve its broadcasts, Robinson said. But WFMT will work to preserve weekends as a home for opera on the radio if necessary.

The Saturday afternoon time slot for opera broadcasts “is kind of sacred ground, and we want to help keep it alive,” Robinson said. WFMT currently offers six months of opera and performance programming during the Met’s May-to-December off-season.

The Met also offers taped recordings of performances to public television’s Great Performances @The Met, from PBS and New York’s WNET, months after they’ve aired in movie theaters as part of the company’s Live in HD series. Great Performances has broadcast rights to past Met offerings and would not need the Met’s permission for rebroadcasts, but a WNET spokesperson said it’s too early to determine how the program would proceed if a lockout occurred.

Previous threats to Met broadcasts have prompted strong reactions from fans of opera on public radio. Last year, WFIU in Bloomington, Ind., attempted to replace the Met and other classical programming on its schedule with news and information but reversed course after an outcry from listeners and the station’s community advisory board. And in 2000, Virginia Tech fired the g.m. at WVTF in Roanoke, Va., after he removed the Met, though he had reinstated it on the university’s orders following a public backlash.

“We broadcast the Met because it’s such an iconic series,” said Preston. A lockout at the Met, he said, “would be really disastrous on many levels.”