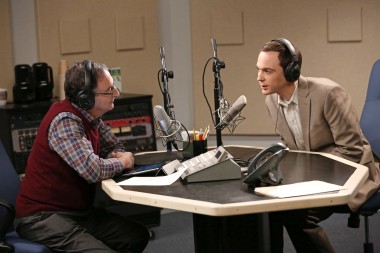 After two decades as a weekly NPR program, the 22-year-old Science Friday is preparing to shake things up.

With its move to Public Radio International distribution on Jan. 1, the talk show has ambitious plans to put its content into wider distribution through collaborations with PRI series such as The World and The Takeaway as well as with the PBS science program Nova. WGBH in Boston, which acquired PRI in 2012, is involved in production of all three major series, opening new cross-platform distribution and branding opportunities.

Ira Flatow portrays himself in a scene with Sheldon Cooper, played by Jim Parsons, on a Dec. 5 episode of CBS’s The Big Bang Theory. (Photo: Michael Yarish/Warner Bros. Entertainment)

A new educational specialist is working to turn more of Science Friday’s content into curricular materials, and PRI is exploring ways to offer its programming through PBS Learning Media, the online resource providing free media and lesson plans to K–12 educators. Already an NPR social media and digital pioneer — Science Friday was the first NPR program to offer podcasts — the show looks to produce more podcasts and is weighing plans to create a weekend non-call-in version of the show. All these ideas and plans are in the mix as producers prepare to begin broadcasting from a new studio being built at the City University of New York’s Graduate Center in midtown Manhattan.

“We make all this content that we’re trying to get more traction for,” Host and Executive Producer Ira Flatow said in a recent interview.

Flatow was talking with PRI about a different content partnership when NPR announced its decision to cancel Talk of the Nation, the two-hour midday talk show that went off the air in June. Flatow and the Science Friday Initiative, the independent nonprofit company that he founded, produced the Friday broadcast for TOTN, and NPR’s decision put stations’ carriage commitments to Science Friday into play.

NPR continued to distribute Science Friday as a standalone program, and did not let the show go without negotiations, according to Flatow. “People thought we could never leave NPR,” he said.

Prior to TOTN’s cancellation, Flatow and PRI were discussing the Minneapolis-based distributor’s ambitions to amp up the science content it publishes online. But the talks turned to a radio distribution deal after TOTN ceased production.

PRI’s interest in the show was multifold, according to Melinda Ward, chief content officer. “Ira has a huge following,” she said, and the show’s “everyday science” approach is audience-friendly. “We share a vision of how to grow the brand of Science Friday and take this notion of everyday science and make it bigger and more widespread.”

Flatow, who joined NPR in 1970, during its first year on the air, described a growing feeling that perhaps Science Friday and NPR no longer shared the same mission. “We believe in the value of talk radio; our audience is growing,” Flatow said.

Flatow said he’s still struggling to understand the cancellation. “All I can say is, Talk of the Nation was at its highest carriage ever when it was discontinued. . . .Talk radio is still very popular.”

NPR isn’t opposed to the talk format, said Eric Nuzum, programming v.p., but is instead looking for “the best articulation of a program or an idea that matches best with audience needs and stations’ needs. Sometimes the answer will be talk, and sometimes it won’t be talk.”

Talk radio is a valuable format for bringing listeners into the conversation, Nuzum said, but “there are a number of ways to achieve that, and having an audience call in is only one.”

A key component of PRI’s plans to expand the Science Friday brand is the show’s archive of several hundred videos produced to supplement its weekly radio broadcasts, including the viral hit “Where’s the Octopus?” which has been streamed more than two million times. Flatow called the videos “the best little secret in town,” and Ward agreed. “That just seemed like an enormous underutilized asset,” she said.

Flatow called the videos “the best little secret in town,” and Ward agreed. “That just seemed like an enormous underutilized asset,” she said.

The videos will be offered to stations for their own websites, Flatow said. They also factor into Science Friday’s educational aspirations.

“We are the only show in NPR history that ever made educational materials,” he said. “We’re a great believer in that, and we want to extend that.”

Concrete plans for cross-pollination between Science Friday and other PRI programs won’t come together until the new distribution agreement begins in January, Ward said. One possibility is for several of the shows to undertake joint initiatives around a particular topic.

As for a weekend program, “We are definitely looking at that,” she said, but “at least five different ideas have been put on the table, and none of them are moving forward at this point.”  One concern is ensuring that any new spinoff does not cannibalize the Friday show.

Funds would also have to be raised for any new program, Flatow said. The Science Friday Initiative expanded its board recentyl from eight to 11 people to help increase the budget, currently at about $1.8 million annually.

Carriage numbers for the January switchover aren’t confirmed, but PRI expects them to remain steady. The show was carried by 322 stations as of a few months ago, the most recent numbers available, according to Science Friday.

“We have not been aware of any drops,” Ward said. “All the research that we’ve done around pricing and so forth, it seems to be holding.” A couple of outlets that dropped the program after TOTN went dark backtracked and reinstated the show. St. Louis Public Radio, which dropped Science Friday in July, cited listener feedback in announcing the show’s return in late September.