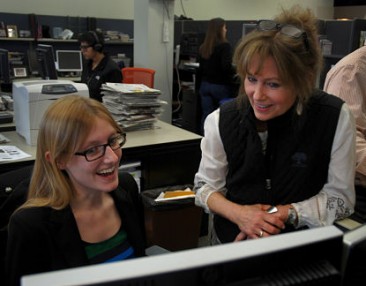 After more than two decades on the air, NPR’s Talk of the Nation will come to an end in June to make way for the newsmag Here & Now, which will be revamped under a new partnership between NPR and Boston’s WBUR-FM.

NPR Chief Content Officer Kinsey Wilson said the network decided to end Talk of the Nation because a newsmagazine might pull a bigger audience in midday.

“Talk of the Nation had an incredibly successful run and in many ways set the standard for call-in programs on public radio,” Wilson said. “Call-in talk has become a midday staple, and there are a lot of good shows out there. There’s no lack of faith at NPR in call-in talk on public radio.”

The approach to ownership and distribution of the revamped Here & Now is novel, Wilson said. Public Radio International currently distributes the show, but that deal ends in June. Under the new arrangement, WBUR will own the show, but NPR will have a financial stake.

NPR and WBUR will share the higher production costs of the show as well as the marketing needed to increase station carriage. Newsrooms at both organizations will provide content, and Wilson said they hope to collaborate with other stations as well. The new approach comes as NPR has increasingly focused on working with member stations to provide new content, he said.

“This represents a new way of working with member stations for sure,” Wilson said. “It’s not like the traditional distribution model. This is a true collaboration.”

Here & Now will be offered weekdays starting at noon, with two hours of live programming that will be rebroadcast with live updates.

KUOW in Seattle carries Talk of the Nation on KUOW2, which is on HD and streamed online. Jeff Hansen, p.d. at KUOW, said he would consider adding the revamped Here & Now.

“It’s a very good show,” he said. “It’s kind of modeled on the style of the BBC Newshour, and [WNYC news show] The Takeaway is also similar, in that it has a strong host and many of the segments are made up of live-to-tape two-ways between the host and guest experts, which has proven to be a pretty good model.”

Hansen agreed that adding a newsmag in midday made a lot of sense for NPR. At a meeting of news/talk programmers during the Public Radio Program Directors conference in Las Vegas last September, Hansen argued that news stations needed more magazine-style programs for midday timeslots, considering that Morning Edition and All Things Considered draw significant audiences on weekdays (Current, Sept. 24, 2012).

“This is a very good move,” Hansen said. “It’s exactly the right thing to do.”

Franny Bastian, director of programming and production for Vermont Public Radio, said she would consider adding a second hour of Here & Now to the hour her stations already airs.

The WBUR-produced show offers listeners a good way to check in on global events in the middle of the day, Bastian said. “It makes sense when you look at the evolution of what stations across the country need for strong middays. It looks like it has good potential.”

The cancellation of Talk of the Nation will likely not have a huge effect on listening for KUHF-FM in Houston, which now airs the show, says Debra Fraser, director of operations and stations manager. But, she said, that would not have been the case if NPR had shuttered Science Friday as well.

“Thank goodness Science Friday isn’t going anywhere,” she said. “We have a city full of oil people and scientists, and they love their Science Friday. So that was a real relief.”

But Fraser said KUHF will probably not raise money around Talk of the Nation during its upcoming fund drive, which could result in a loss of about $25,000 in revenue.

When KUHF took Talk of the Nation off the air for a while about 15 years ago, it sparked “a pretty heavy-duty letter-writing campaign.”

“I’m hoping that doesn’t happen, but in this case there’s nothing we can do about it,” Fraser said.

Time off for Conan

Talk of the Nation’s Neal Conan, who has hosted the show for 11 years, will “step away from the rigors of daily journalism,” according to an NPR release. Wilson said Conan plans to leave NPR to take time off and possibly write a book.

NPR is confident that the remaining staff of Talk of the Nation will find new jobs within the organization, Wilson said.

Here & Now debuted on WBUR in 1997 and launched nationally in 2001. The show now airs on more than 170 stations. It gained traction on stations after NPR canceled Day to Day, a newsmag produced from NPR West in Culver City, Calif., in March 2009. Though the reconfigured Here & Now will adopt the newsmag format, it will be twice as long as its predecessor, which VPR’s Bastian said should give it an edge.

“A one-hour show [like Day to Day] doesn’t really help us out,” Bastian said. “This seems like a natural evolution to say, ‘Hey, here’s a program for public radio news stations to have a solid block to offer listeners.’”

Here & Now has a strong base to grow from and succeed, said Charles Kravetz, WBUR g.m. “The show knows what it’s doing and has been doing great work,” he said. “So the basics of the program will stay pretty much the same — we’re just going to be adding resources and bumping it up another hour.”