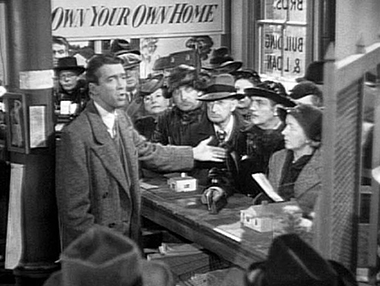 Nope, it's not time to opt out of national leadership, Michael Arnold writes, channeling Jimmy Stewart in It's A Wonderful Life. Stations have achieved so much in partnership with public radio's national producers, and station support is still needed. (Photo: Republic Pictures' It's a Wonderful Life)

As public radio leaders debate how the public radio economy can or should adapt to the new ways that listeners tune into — and choose to support — our most popular programs, I’m reminded of the movie It’s a Wonderful Life — specifically the bank-run scene in which Jimmy Stewart’s character, George Bailey, pleads with depositors not to withdraw their money from the community-owned savings and loan association that his father started.

Bailey’s impassioned appeal to the S&L patrons — that by pooling their deposits, they make their community of Bedford Falls a better place — doesn’t convince everyone, but it does save the S&L.

Public radio has reached a potentially dramatic moment with the feel of that classic scene. Instead of wondering how to avert a run on the bank, though, leaders of public radio stations are worried about bypass — that listeners will drift away from their local broadcast service and direct their financial support to national producers instead of local stations.

Nope, it’s not time to opt out of national leadership, Michael Arnold writes, channeling Jimmy Stewart in It’s A Wonderful Life. Stations have achieved so much in partnership with public radio’s national producers, and station support is still needed. (Photo: Republic Pictures’ It’s a Wonderful Life)

Some suggest that the increasing availability of national programs as podcasts and live streams — as well as shows that owe their existence to increasingly popular crowdfunding platforms — call for dramatic restructuring of public radio’s program funding model.

As NPR begins another search for a new president, station-based managers have renewed their debate about NPR’s relationships with member stations and listeners. Tim Eby, g.m. of St. Louis Public Radio and a former NPR board chair, questioned whether the network should reduce the number of station managers serving on its board and be allowed to raise money directly from listeners. And public radio consultant John Sutton wrote in Current earlier this year that NPR could easily raise enough listener contributions to replace the money it earns from stations’ carriage fees. If stations allow it to directly solicit gifts, he proposed, NPR could eliminate its program dues, offering its shows for free broadcast. Many program directors are so enthusiastic about this idea that they’ve begun questioning why they should keep paying carriage fees.

(For full disclosure’s sake: My employer, Wisconsin Public Radio, relies on carriage fees to cover a portion of the cost of producing three national programs.)

If we want to think about changing the economics of public radio, here are three things to remember:

Station fees are essential to the networks’ financial health. Although NPR, American Public Media and Public Radio International have invested in digital content streams that go directly to listeners, not much has changed about how networks make their money. Most unrestricted funding at networks comes either directly from stations through carriage, affiliate or membership fees, or indirectly through money made from radio-related sponsorship.

It can be easy to forget how important stations are to network finances, especially when other revenue streams are growing. While sponsors of NPR.org and other digital platforms are carrying more program costs, they still contribute a small portion of network budgets. For example, NPR’s digital sponsorship from podcasting and online ads accounts for only about 5 percent of the network’s annual budget.

Some observers suggest that the public radio networks are held back by the traditional ban on their direct solicitation of listener support. They neglect to mention that going after that funding would be a steep climb for networks. Similarly, some predicted that the big Joan Kroc gift would overturn the old funding model, expecting it to open the door to more and more endowment gifts from major philanthropists — but NPR Foundation activity remains a small portion of the network’s revenue.

More recent developments demonstrate the networks’ increased reliance on stations for funding. For example, when NPR decided to discontinue Talk of the Nation and begin a partnership with WBUR’s program Here & Now, it shifted the responsibility of funding a key NPR midday program from a network to a station. Public Radio International’s two major programs — The World and The Takeaway — also rely on partnerships with stations.

The ties between stations and networks are so strong that two public radio networks are owned by station operators: American Public Media is part of the group that runs Minnesota Public Radio; KPCC in Pasadena, Calif.; and Classical South Florida. Public Radio International is now owned by WGBH in Boston, which operates three radio services in New England: news/talk WGBH-FM, Classical New England and WCAI/WNIN serving Cape Cod and the islands.

Audience-sensitive revenues provide only part of the funding that sustains public radio. Bypass fears have been revived largely by the crowdfunding successes of Planet Money and 99% Invisible, and by expectations that NPR can earn more from digital media sponsorships and licensing deals.

But revenues from listeners and underwriters support only 56 percent of stations’ revenue, according to CPB. Most of the rest comes from public-sector sources such as Congress, states and local governments.

While some broadcasters regard public subsidies as liabilities, they play a vital role in the public radio economy. This funding diversity helped give public broadcasting its resilience during the recession and recent turbulence in NPR’s executive ranks.

To maintain a strong economy for public radio, station leaders have to do more than increase their revenues from listeners and underwriters; they have to continue strong advocacy for government to help advance the field’s public service.

In fact, stations need to be more aware of how much this support sustains and strengthens the work they do.

Station leaders must chart public radio’s path towards a strong future. If public radio’s leaders truly want to shape and secure their services, they need to do more than pay the bills. They have to tackle larger questions, such as how to balance their content investments for broadcast and non-broadcast, how to develop programs for changing audiences and how to expand their talent pool. They must step up to a new level of leadership.

Stations need to approach any dialogue about the future from a position of strength. Stations pay most of the bills in public radio, and many of the key decisions will be made by station-based leaders. None of the challenges ahead will be easy to overcome, but it will be much more difficult to do that if stations forget just how important they are to the vibrancy of public radio.

This brings me to another similarity between many public radio managers and George Bailey. Under economic stress, they don’t always recognize that they have the power to reconsider and correct their course of action.

NPR would not exist without stations. Public radio could claim none of the major accomplishments of its past four decades without decisions made largely by committed station-based leaders.

Especially if the door to the NPR president’s office continues to revolve faster than we’d like, public radio’s cadre of dedicated station leaders will play a crucial role in recharting the field’s future success. At times like these, station leaders shouldn’t be opting out; they should be rolling up their sleeves, as they’ve done with notable success in the past.

It reminds me of a knowing remark by Clarence the Angel, who talks George Bailey out of his despair at the conclusion of It’s a Wonderful Life:

“Strange, isn’t it? Each man’s life touches so many other lives. When he isn’t around, he leaves an awful hole, doesn’t he?”

Michael Arnold is associate director and director of content for Wisconsin Public Radio, where he oversees the national programs To the Best of Our Knowledge, Zorba Paster on Your Health and Michael Feldman’s Whad’Ya Know? During his 27-year career in public radio, he’s been involved in the production design, programming and distribution strategies of many new public radio shows, including Q with Jian Ghomeshi and The Takeaway.

One thought on “Public radio is stronger, and better, when stations invest in national shows”