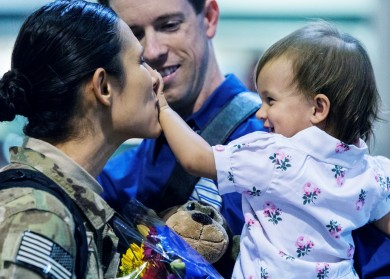 A nationwide collaborative public media project announced today will focus on the experiences of military veterans during and after war.

Bobby Henline, a veteran who was injured by an explosive device on duty in Iraq, prepares to perform his comedy act in the documentary Coming Back with Wes Moore, airing as part of a national pubmedia veterans project. (Photo: Powderhouse Productions)

PBS will roll out multiplatform content under the banner Stories of Service, including documentary programming through fall 2016. CPB will fund a related community engagement campaign, Veterans Coming Home. The corporation is also backing public radio content, including the StoryCorps Military Voices Initiative, a special episode of The Moth, and the pubradio project The Great War, commemorating the 100th anniversary of the outbreak of World War I.

“Americans will connect to these powerful stories of courage, commitment and sacrifice,” said CPB President Pat Harrison in the announcement. “They will see the veterans as people who have so much to contribute as they return to civilian life. And once they hear and see these stories, they will be compelled to respond through their local public media stations to work with local business and veterans organizations, faith based and community groups.”

Stations also will produce local projects with PBS Digital Studios. KLRN in San Antonio, whose hometown hosts one of the largest populations of active and retired service members, is launching a 10-part online series with PBSD, Coming Home San Antonio, looking at challenges facing veterans and their families. It premieres May 9.

The national on-air initiative begins May 13 with the three-part Coming Back with Wes Moore, a film tracing the best-selling author’s quest for answers after a longtime friend and fellow officer commits suicide.

Such stories “provide a deeper understanding of our nation’s military history,” said PBS President Paula Kerger in the announcement. PBS stations “hope to spark conversations in communities and give the public an opportunity to share their personal or family story of service through local events and programs.”

Other programming includes the National Memorial Day Concert May 25; the American Experience episode Death and the Civil War, May 26; Women & War, part of the “Makers: Women Who Make America” project, in September; Last Days in Vietnam in 2015; and Ken Burns’ The Vietnam War in fall 2016.