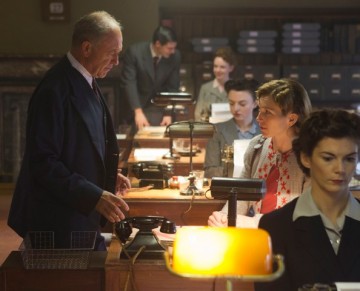 With the influx of new British dramas on public TV — and the surge in viewership that it has spawned — longtime fans of PBS’s Masterpiece strand can look forward to the return of a familiar and beloved cast of characters in September.

Foyle’s War, a detective series starring Michael Kitchen as the indefatigable Chief Detective Superintendent Christopher Foyle and Honeysuckle Weeks as his assistant Samantha “Sam” Stewart,  has made yet another comeback to strong viewership on Britain’s ITV.

The commercial broadcaster has tried to mothball the production twice only to commission more episodes at the demands of its viewers. The debut episode of the new three-part series, which is set in post–World War II London, drew 8.5 million viewers in Britain in March, according to Jill Green, executive producer. ITV responded by commissioning three new episodes.

For fans in the United States, Masterpiece Mystery! will conclude its summer season on PBS with its first run of the new Foyle’s War. As a testament to the show’s power to resonate with fans of British drama, PBS also has commissioned an August pledge special, Inside Foyle’s War, from Acorn Media, the program syndicator and retailer that sold so many DVDs of the show that it bought the property outright.

The new three-part series presented by Masterpiece features the compelling storytelling and acting that viewers expect from Foyle’s War, yet it takes them to a different place than the coastal town of Hastings, Sussex, the setting of its first seven seasons. Foyle comes out of retirement to work in the intelligence community, not the police force.

“We didn’t want to go backwards into World War II,” Green says of the creative decisions behind the series’ reboot.

Anthony Horowitz, a British author and screenwriter and Green’s spouse, created Foyle’s War. To write a new storyline for his characters, he “had to cleverly engineer stories of post–World War II.”

Horowitz set the new mysteries “into the very early days of MI5 and the Cold War in 1946-47,” Green said. The time period is rarely dramatized on TV and brings “a new enemy — Stalin — combined with increasing Communism, spies, and a U.K. now experiencing post-war austerity.”

“MI5 also operated by different rules than the police force, more smoke and mirrors and hidden crimes, which challenges Foyle’s continuing search for the truth in his new role as Intelligence Officer,” Green said.

Producers opted to shoot in Dublin, Ireland, and relied on CGI embellishment to recreate the MI5’s original headquarters on Curzon Street, in London’s West End. “Dublin was perfect for its Georgian streets and architecture and huge amount of film-friendly period institutional buildings,” Green said.

With its new emphasis on urban locations, this Foyle’s War is darker than before, evoking a foreboding, claustrophobic film-noir atmosphere in contrast to the sunny beaches and wide-open rural locations of the earlier programs.

Foyle and his foil

Those who have worked behind the scenes to bring Foyle’s War back say Michael Kitchen’s uniquely underplayed take on Christopher Foyle has distinguished the series from other crime dramas. “Personally, I think Kitchen is the perfect film and television actor,” said Rebecca Eaton, e.p. of Masterpiece at WGBH in Boston. “He can say more with his eyes and facial expressions than another actor could with pages of dialogue.”

“He’s the only actor I’ve ever worked with who says, ‘Give me less lines,’” Horowitz said during an interview for the PBS pledge special. “He’s much more interested in saying less and doing more with his eyes, his face, with silence.”

Horowitz also engineered the new plotlines to reinstate Sam, whose chattiness provides a contrast to her employer’s taciturn nature and his tendency to play his cards close to his vest.

Sam is, as Eaton puts it, “Foyle’s foil,” serving the same role as Dr. Watson in the Sherlock Holmes mysteries — the audience’s surrogate who probes the mind of an often inscrutable sleuth by asking lots of questions. Indeed, Foyle’s annoyance with Sam’s volubility and inexperience with police procedures in early seasons eventually gave way to an affection and reliance on her as a sounding board for his deductions.

Due to behind-the-scenes drama at ITV and at Greenlit, the production company that Green and Horowitz operated when they created the series, the last two seasons of Foyle’s War fast-forwarded through the war’s end and sent Inspector Foyle into retirement and Sam into married life as a civilian.

The creative decisions accommodated an ITV program director who decided in 2007 to cancel the show, yet the series’ popularity and the outcry at its end prompted his successor to commission a new season for 2010. The show was not renewed, however, and Green lost rights to the program when she sold Greenlit Productions to Target Entertainment in 2008.

Acorn Media Group, which already held the license to distribute the series in the United States, bought the full rights to the show. “Acorn has held the home-video rights to Foyle’s War since 2003, and the series remains one of our top-selling franchises on DVD,” said Mark Stevens, president.

When Acorn bought the series outright in 2010, its executives saw the acquisition “as a key step forward in the company’s vision of being content owners, so we could grow our content across all distribution channels,” Stevens said.

To whet fans’ appetites for the new episodes coming to Masterpiece, PBS is distributing an August special featuring Len Cariou of the CBS cop show Blue Bloods as host.

Inside Foyle’s War will “tease the plot twists and turns of the new series and provide viewers a chance to experience classic highlights from the earlier seasons,” said Dan Hamby, e.p. of the special and a consultant to Acorn.

If audience ratings and ITV’s greenlight for more episodes are any indication of the new drama’s longevity on U.S. public television — and they usually are — Foyle’s War is poised for another multiseason run.