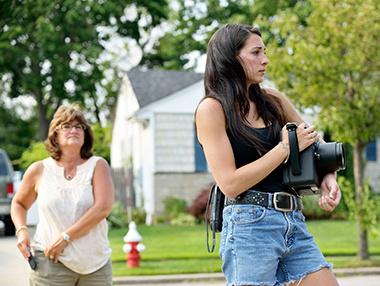 Mary Ann Guglietta, an unpaid photography intern for WNET, helps out on the set of a commercial for the station. (Photo: WNET)

The interns had been working for $12 per hour for nearly a year, their terms extended informally after the end of their initial six-month employment agreement. As part of a larger staff reduction at public radio’s most popular nationally distributed classical music program, APM cut the show’s paid internships along with three full-time jobs.

Mary Ann Guglietta, an unpaid photography intern for WNET, helps out on the set of a commercial for the station. (Photo: WNET)

But unlike the staff positions, the internships weren’t being eliminated altogether. Three weeks after releasing its three paid interns, Performance Today began a new search: for unpaid, “volunteer” interns.

Recruitment of interns to work for little or no compensation is commonplace in public media, an institution mainly composed of community-based nonprofits that have long relied on volunteers. Nearly every station, production company and distributor in the system has some form of an internship program that’s designed to offer training and experience, but not necessarily pay.

One notable exception is NPR, which recruits three classes of more than 50 paid interns per year. The interns receive basic training in audio production and writing for radio.

Last week PBS announced that starting this fall, it will begin paying all of its interns.  Currently PBS compensates only interns who work through the summer, while those who intern in the spring or autumn receive no pay. NPR had a similar system in place prior to 2011.

To budget for the expansion of paid internships, PBS will limit the size of its intern classes: 30 will be retained in the summer and no more than 10 each in the fall and spring.

This summer, 40 interns are working for PBS, more than double the 18 retained in 2007. Its previously unpaid internships typically recruited about nine interns each for fall and spring semesters.

“We’re really pleased about this change,” PBS spokesperson Jan McNamara said. The objective of the program, to “provide students a meaningful hands-on experience and a glimpse into the world of public media,” remains the same, she said.

As managers grapple with how to cultivate young, diverse talent as public media leaders, questions of whether to compensate interns — and even what constitutes a legal internship — become more complicated.

Charlie Rose and the law

Under the U.S. Department of Labor’s Fair Labor Standards Act, unpaid internships must meet six criteria, including that the experience benefits the intern rather than the employer and that the intern does not displace regular employees. On its website, the National Council of Nonprofits recommends that nonprofit organizations define their unpaid interns as “volunteers” with no paid stipend to protect themselves from legal risk.

Charlie Rose Inc., the for-profit company that produces Rose’s programs for both public and commercial TV, recently settled a lawsuit filed by former interns who received no compensation for their work. (Photo: CharlieRose.com Inc.)

One company tied to public media has already backed off from a legal challenge to its internship program.  Charlie Rose Inc. — the for-profit company that produces Rose’s lineup of pubTV and commercial programs — finalized a settlement July 1 for a class-action lawsuit brought by former unpaid interns. The company agreed to pay around $110,000 in back wages.

Lucy Bickerton, the lead plaintiff in the Charlie Rose suit and a friend of the lead plaintiffs in the Fox Searchlight case, told Current she had accepted the internship on the advice of her parents, who were fans of the pubTV program. It was the third of four unpaid media internships Bickerton would take before deciding to abandon hopes of a film career, she said.

“At the time when I did the internship, I didn’t know anything about labor laws,” Bickerton said. “I had a sense of injustice growing as I did all these internships.”

“There are nonprofits who employ interns and pay them,” Turner said. “If I were a nonprofit, I would be pretty cautious to the extent I was relying on interns to get the work of my organization done. . . . You couldn’t have your local public radio station say, ‘We’ve decided not to pay our reporters anymore, or our production staff.'”

There must be a significant educational component to an internship beyond standard on-the-job learning to justify a lack of payment, Turner said.

“Learning on the job is something that happens in any work experience, whether it’s paid or unpaid,” she said.

Organizers of public media internships point to training for the professional workplace as a key educational feature of their programs. Peggy Gaito, internship coordinator at New York’s WNET, said each intern learns the skills required of his or her assigned department. They don’t replace paid employees, she said.

WNET is the presenting station for Charlie Rose but doesn’t share ownership of the production; it also maintains its own separate unpaid internship program. All of the pubcaster’s interns — 35 make up its current class — must be currently matriculating college or graduate students.

Bob Feinberg, v.p. and general counsel for WNET, said that the regional pubcasting network neither pays its interns nor classifies them as volunteers.

“On the face of it, they’re both instances of a person who’s doing work within our organization and not getting paid for that work,” Feinberg told Current. But, he went on, “the unpaid intern is largely engaged in a training or learning experience. The unpaid volunteer is here to do potentially administrative work from which that volunteer gains no training, but from which that volunteer is supporting that organization.”

The restriction to current students is designed to put WNET on safer ground legally, Feinberg said.

WNET also offers a paid minority fellowship funded through the Reginald F. Lewis Foundation. Feinberg is also working to start a legal fellowship program that would be funded by the student’s law school.

Beyond the legal ramifications, the role that internships play in cultivating the next generation of public media leadership also weighs on veteran pubcasters.

Some senior station managers who participated in the session, including Joseph Bruns, c.o.o. of WETA-TV/FM in Washington, D.C., described the programs as opportunities to bring fresh talent into bootstrapped stations. Other attendees, such as Doug Mitchell, manager of NPR’s Next Generation Radio project, said the proliferation of unpaid internships perpetuates the lack of diversity in public media’s workforce by limiting the pool of applicants to those who can afford to work for no compensation.

Although APM eliminated its paid internships for Performance Today, the Minnesota-based pubcaster and distributor does offer both paid and unpaid internships, according to Jennifer Hanlon Ash, director of talent acquisition.

In fiscal 2013, 19 interns were paid for their work and 16 joined APM as “volunteers,” she said. APM does not have a company-wide internship program and allows managers in each department to make their own decisions about compensation. But unpaid interns work fewer hours than APM employees and perform fewer tasks, she said.

APM does not require applicants to earn college credit for their internships because the company doesn’t want to deter potential applicants who are not currently enrolled in school, Ash said. All APM internships include mentorships and training opportunities as well as classes about production of the distributor’s most popular programs.

APM’s senior managers recognize that inconsistencies in the company’s internship programs are problematic and are working to address them, according to Ash, who declined to elaborate on possible solutions.

“I believe that the internships are a pathway to careers within public media, and we want to make sure that that pathway is as open as possible,” she said. “And I agree that unpaid [work] can close off that pathway.”

In the Los Angeles region, where unpaid interns are the norm throughout the entertainment industry, public TV takes a slightly different approach from commercial media.

In 2011, PBS SoCal partnered with local universities to begin a formal unpaid internship program. The launch coincided with the station’s quick ascension as the flagship PBS station for Los Angeles.

The internships resemble a hands-on class experience rather than a job, said Jamie Myers, v.p. of education and community engagement. Most of the interns are college juniors and seniors, and they’re each assigned a mentor.

“It’s not like the intern’s coming in to replace the full-time staff member,” Myers said. “It is a mentorship opportunity. It is a process.”

Most of PBS SoCal’s interns come from nearby California State University, Fullerton, which partnered with the Orange County–based pubcaster to develop a program that can double as a class for students studying education, broadcasting or other disciplines that overlap with public television.

PBS SoCal generally takes in 12 to 15 interns per semester and requires that each earns college credit from the program, Myers said. Through CPB’s American Graduate initiative, the station also takes one high-school “intern” per semester, recruiting them from local nonprofits such as Girls, Inc. The high-school intern is placed in an intensive mentorship program and also leads the station’s studio tours.

For public media outlets with small staffs and smaller budgets, hiring interns to help manage the workload can be tempting. Some stations have found ways to strengthen their internship programs through partnerships, often with universities.

Some of these arrangements don’t involve payment. At a July 11 session about internships at the Public Media Development and Marketing Conference in Atlanta, NJTV General Manager John Servidio talked up a production internship program that NJTV developed with Montclair State University. Students assist with production of the public-affairs program NJ Today, which is based at the university.

Interns aren’t paid, though Servidio said their contributions are valuable to the network.  “I don’t know what we would do without them,” he said. NJTV interns receive on-the-job training in local-news production as well as guidance in completing projects that help build their portfolios. Most of the interns are already skilled in basic production and editing techniques when they arrive at the station.

When a PMDMC attendee asked how to address concerns over the legality of unpaid internships, Servidio described a written contract that NJTV interns sign. It spells out their job duties and the benefits of the program to both the intern and NJTV.

In Fort Myers, Fla., WGCU recently built on a longstanding educationally focused program by offering a paid internship through a new partnership with the City University of New York.

Amy Tardif, radio station manager and news director at the joint licensee, established the unpaid internship program 15 years ago when she was preparing to take maternity leave and realized that the staff would need extra help. Since then, the station has retained an intern every semester who earns school credit but no compensation for his or her station work. Most students apply for internships through Florida Gulf Coast University, WGCU’s licensee, and the program has evolved into a rigidly structured class-like experience, replete with a syllabus and prerequisites.

Through the station’s new arrangement with CUNY, the university is paying its own graduate student, Topher Forhecz, during his summer internship.

Without CUNY’s financial assistance, WGCU would not have prioritized paying its interns, according to Tardif. “We just don’t have the funds,” she said, adding, “If we could pay somebody, I would go out and hire an experienced reporter to add to our employees.”

Still, Tardif says the interns who come through the station are armed with skills they need to pursue careers in broadcasting. As proof, she points to WGCU’s own track record in offering gainful employment. Over the past five years, the station has hired four of its own interns for full-time jobs.

“I think there are a lot of students getting good experience out of this,” she said. “As long as they’re not being taken advantage of.”

One thought on “Public media wrestles with legality of unpaid internships”