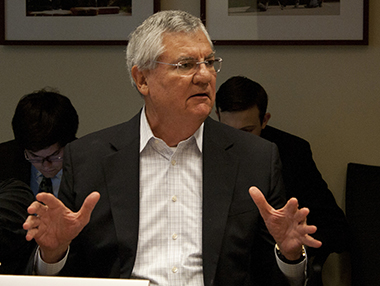 As public and for-profit media companies come under new scrutiny for compensation of interns, public media executives debated how decisions to pay — or not pay — young talent support efforts to cultivate the next generation of system leaders.

WETA currently accepts applicants year-round for 11 positions in spring, summer and fall sessions and requires interns to commit 15 to 40 hours weekly depending on their positions, according to its website. Although they’re not paid, WETA interns can apply to receive college credit for their work at the station.

“Is that a problem, if they’re unpaid?” asked forum moderator Adam Clayton Powell III, director of Washington policy initiatives for the University of Southern California’s Annenberg School for Communication and Journalism, which co-produced the forum with American University’s School of Communication.

“It’s not a problem for us,” Bruns said, to laughter. WETA is exploring the possibility of paying its interns, but he sees compensation as “a different problem” from the issue of how to grow and train public media’s next generation of leaders, he said.

As the forum explored the generational differences between senior leaders and young professionals in public media — and importance of striving for age and ethnic diversity within the workforce — unpaid internships were viewed by other participants as problematic.

A June 11 ruling by a New York federal district court judge put media companies on notice that the practice of not compensating interns could open them up to liability. In a lawsuit filed by two former unpaid interns, Judge William H. Pauley III ruled that Fox Searchlight Pictures had violated federal and state minimum-wage laws by requiring them to work for no pay. Fox plans to appeal the decision.

One public media outlet has already been hit with a lawsuit over its internship program and opted to resolve the grievance out of court. Producers for Charlie Rose settled a class-action lawsuit with a former unpaid intern late last year, agreeing to pay up to $1,100 in back wages to as many as 189 former interns who worked on the PBS program between March 2006 and October 2012.

Pay practices for interns vary amongst public media organizations. NPR, which takes in three classes of more than 40 interns each per year, paid only its summer interns until fall 2011, when it began paying all interns. The change widened the pool of applicants to include those with a greater diversity of economic backgrounds, said Doug Mitchell, a consultant and project manager for NPR who directs the multimedia training project Next Generation Radio.

In a tweet posted during the forum, Mitchell disagreed with Bruns’s assessment of unpaid internships: “Unpaid internships ARE a problem because they are exclusive. You’re getting those who have economic advantages.”

Mark Stencel, NPR’s managing editor for digital news, said the news organization has benefited from its decision to pay all interns.  “The investment to pay that intern program year-round at a time of fiscal constraint is a big investment to make, [but] it’s important,” he said. “We would rather have fewer paid interns than have as many coming through as we did before.”

Most forum participants agreed that internships are key to cultivating the next generation of public media professionals, and that being able to attract a diverse pool of applicants is crucial to developing a diverse class of future leaders.

“If we get diverse people in a system of leadership, it diversifies the system,” said Joseph Tovares, senior v.p. for innovation and diversity at CPB. Jannette Dates, dean emerita of Howard University’s School of Communications, added, “The pipeline for public television and radio is at the university level; it is at these internships.”