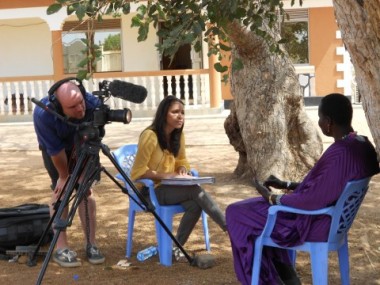 WXXI's Hélène Biandudi interviews Nyandeng Malek, the first-elected female governor of East Africa, as part of her coverage of education in South Sudan.

The educational system in the newly independent South Sudan is undergoing many changes, and WXXI’s Hélène Biandudi recently reported on them firsthand for broadcast and digital audiences of the Rochester, N.Y., station.

Last month, she traveled to the village of Mayan Abun to report on the opening of the first school built by the Rochester-based organization Building Minds in Sudan. Biandudi spent 10 days in the village interviewing students, teachers and community leaders.

WXXI’s Hélène Biandudi interviews Nyandeng Malek, the first-elected female governor of East Africa, as part of her coverage of education in South Sudan.

Sebastian Maroundit, co-founder of Building Minds, invited Biandudi to cover the changes occurring in his native village. He is one of the “Lost Boys of Sudan,” a group of some 20,000 children who fled the country after civil war broke out in 1983. Both he and his cousin Mathon Noi spent nearly a decade at a refugee camp in Kenya before resettling in the United States in 2001.

“My first trip back was in 2007. A child came up to me and said: ‘What about us?’” Maroundit recounted. The local school had been destroyed, and children were studying in “under tree schools.” Back in Rochester, Maroundit and Noi created Building Minds in Sudan and started fundraising to construct a school building in Mayan Abun.

The Rochester community contributed just over $160,000 to the fundraising campaign. Three churches each donated over $10,000 apiece, Maroundit said, and one individual gave $30,000. Schools and other organizations also contributed thousands of dollars to the cause.

Construction of the four-classroom school building, built of brick and cement, was completed last year.

Biandudi’s reporting allowed local contributors to learn about the changes to village life that were made possible with their efforts. “It was all about bridging Rochester with South Sudan,” she explained.

For example, Biandudi profiled a 17-year-old woman who became the first female in her family to receive a formal education. According to Maroundit, the school’s greatest achievement was increasing enrollment of girls from 37 in 2007 to 259 today. As Biandudi explained in her coverage, before the 2005 peace agreement women were banned from going to school.

In addition to reporting for broadcast on WXXI, Biandudi chronicled her trip with “Schools for South Sudan,” a blog on WXXI’s news website, and created a special hashtag for those who followed her on Twitter, #SouthSudanEd.

WXXI news director Julie Philipp described the trip as a way to build connections with local listeners: “It was an opportunity to talk to our audience, to be connected in a meaningful way. The news industry sort of gets caught up in this Twitter cycle. They may be more connected than ever, but it’s not necessarily meaningful.”

Biandudi used Skype to build connections between school children in Rochester’s School 36 and the Ajong School in South Sudan. Many of the Rochester students became interested in fundraising on behalf of the Sudanese students after hearing Maroundit describe his experiences as a Lost Boy. Biandudi organized the session because “it was important to put a face to the name,” she said.

“It was wonderful,” said Michelle Sutton, a teacher at School 36. “Our kids were so enthralled with the kids in South Sudan. They wanted to be friends.”

The Sudanese School project is tied to “RACE: Are We So Different?”, an outreach initiative in which WXXI is a partner with other community-based organizations. Its centerpiece is a traveling exhibit that was brought to Rochester through a $200,000 grant from the Rochester Community Foundation. The exhibition’s purpose is to promote dialogue about racial issues. The foundation saw an alignment between the outreach project and racial issues that affect education in South Sudan and provided a grant to cover production costs, including Biandudi’s trip.

Some of her reporting aired on Need to Know Rochester, WXXI’s weekly local public affairs show. She plans to finish an hour-long documentary to air as a WXXI special by fall.

“[Biandudi’s reporting project] helped people in the village to speak for themselves about their experience,” said Maroundit. “It helped tell people in the U.S. the problems with gender and race in our education. People were not aware; now they see the big picture.”