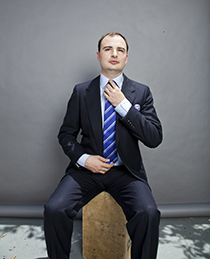 Jesse Thorn is the creator and host of Bullseye, which will move to carriage under NPR in April. (Photo credit: Noe Montes)

Jesse Thorn is the creator and host of Bullseye, which will move to carriage under NPR in April. (Photo credit: Noe Montes)

More than six weeks after first announcing his arts-and-culture radio program’s exit from Public Radio International distribution, Jesse Thorn revealed Feb. 7 that NPR will pick up the weekly show beginning in April. The new distribution deal takes effect after the PRI contract expires, ensuring that there will be no break in its weekly broadcast schedule.

Thorn told Current there were “several interested parties” vying to pick up distribution of Bullseye, but “ultimately NPR was really passionate about the show and I thought that they had the best shot of getting our show to the most stations,” he said. Increased station carriage of Bullseye was the principal goal for Thorn and his producers as they sought a new distributor, he said. The program is now airing on as many as 30 stations, he estimated.

NPR programming chief Eric Nuzum and his new deputy Izzi Smith are the point people for Bullseye at the network. Thorn looks forward to working with NPR’s listener panels, which are tapped for programming research, to help improve the program.

Bullseye will get a small sum from NPR’s revenue as part of the three-year deal, but Thorn emphasized, “It wasn’t about money. Really what it was about is, there’s only one NPR.”

“We’re excited to be joining forces with the big dogs in public radio, and excited that we’ll no longer have to spend like half of every conversation at every cocktail party explaining the complicated square-rectangle relationship between ‘public radio’ and ‘NPR,'” Thorn wrote in his announcement. “Our hope is that this partnership will mean a better show, better guests and a bigger station lineup.”

Bullseye with Jesse Thorn had been with PRI since 2007, and was previously titled The Sound of Young America. The program, on which Thorn interviews comedians and pop-culture luminaries, will still be produced independently through Thorn’s production company, Maximum Fun, and production will continue to be based out of Maximum Fun headquarters in L.A.