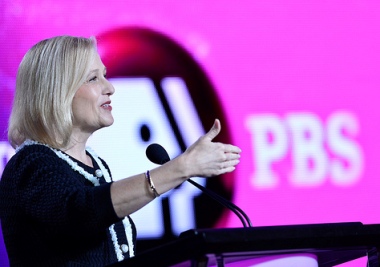 PASADENA, Calif. — PBS is weighing whether to schedule the debut of the next season of Downton Abbey for the fall, when it is set to air in the United Kingdom, or continue its practice of delaying the premiere until January.

During public broadcasting’s portion of the Television Critics Association Winter Press Tour Jan. 14, PBS President Paula Kerger told TV writers that scheduling new episodes of the blockbuster British drama is “complicated for a lot of reasons.”  Broadcasts that coincide with the U.K. premiere would mean that American viewers wouldn’t have to dodge spoiler alerts from Britain that reveal plot developments months before the U.S. debut. But a fall launch also would mean that the Masterpiece Classic series would face much more competition for viewers’ attention amidst the promotional clutter of the networks’ new broadcast TV series.

Premiering Downton Abbey in January helps PBS garner enormous amounts of publicity for the show, Kerger told critics. “We’re going to end up making the decision based on what we think will be best for the viewers and what will serve them well.”

Elmo will continue to have a prominent role on the preschool children’s series, despite the sex scandal involving Kevin Clash, the Emmy Award winning puppeteer behind the character’s rise to fame. Clash resigned from Sesame Workshop last fall after two young men went public with allegations of improper sexual behavior by Clash.

Producers at Sesame Workshop handled the controversy well, Kerger said.  “People understood that the character of Elmo is larger than any individual,” she said. “And I think that they did a good job of assuring people that that was the case. I have not seen a negative impact.”

Kerger was surprised and puzzled, however, by the presidential politicking over public broadcasting’s federal funding last fall. When Republican presidential candidate Mitt Romney vowed to take a budget ax to “Big Bird” during his Oct. 3 debate with President Obama, “I really almost fell off my couch,” Kerger told critics.

Throughout his presidential campaign, former Massachusetts Gov. Romney had repeatedly talked of cutting the deficit by ending federal subsidies to public broadcasting,“ It didn’t make any sense to me,”  Kerger told Current. Federal aid to public broadcasting amounts to less than one-hundredth of 1 percent of the federal budget.

Equally shocking, she said, was that Romney’s debate remark  instantly made PBS funding a Republican campaign issue, upending decades of effort to position public television as a nonpartisan service. “We’ve always had bipartisan support but I think we are in a period where there’s a lot of concern about the size of spending and what we can afford to have,” Kerger said.

Even with the election over and the nation pulled back from the fiscal cliff, at least for now, public TV’s sources of private revenues are in decline, putting PBS and its member stations in a precarious position if federal aid were to be cut. Despite ratings gains, corporate underwriting, station memberships and money from on-air pledge drives are significantly less than a decade ago. At the same time, a 13 percent reduction in federal funds that came with the elimination of the Public Telecommunications Facilities Program has sharply reduced the ability of public TV stations to replace obsolescent equipment.

“Where I really worry about the impact is with some stations that have been operating close to the edge, and not necessarily small stations,” Kerger said. Though federal funds provided through CPB comprise just 15 percent of the PBS budget, many stations rely much more heavily on the assistance. An end to federal aid would cause about a third of all public TV stations to go dark, she predicted.

“I really needed to find someone who not only had a more holistic view but someone fairly senior to come in and look at all of our fundraising programs and look for ways that we can be more effective,” Kerger said.

Wilson’s goals are to find methods of raising more money on-air while helping stations reduce their reliance on pledge revenues, Kerger said. “If stations are able to build up a more robust membership program and bring in more major donors and attract more funding, then the on-air fundraising becomes less of a focal point,” she said.

Wilson’s assignment is part of a three-year plan, initiated with the Downton Abbey pledge event that aired in November. The special capitalized on the popularity of the British co-production to raise money for individual stations, and set new precedents for coordinated on-air fundraising. It was the first time that all PBS stations could simultaneously run a pre-recorded pledge program, and the first time that fulfillment of pledge premiums was handled from a central location.

At the same time, PBS plans to closely scrutinize on-air fundraising tactics employed by public radio, which has fared considerably better in raising money and retaining members through pledge drives. Kerger believes that public TV might benefit by adapting NPR’s strategy of embedding fundraising into its core programs instead of trying to tempt prospective donors with premium offers.

“Last year, public television and public radio development people came together in one meeting and we’ll do it again this year,” Kerger said, referring to the Public Media Development and Marketing Conference in Seattle. “We’re looking at some of the things public radio has done that might make us more successful.”