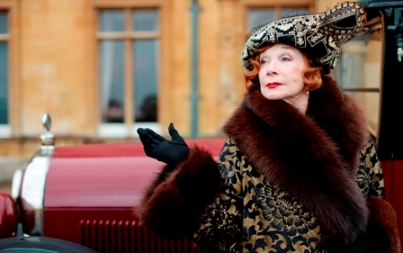 Fans of Masterpiece’s hit Downton Abbey await arrival of the British drama’s third season, PBS and some 70 local stations hope to reel them into the public TV membership fold with a Nov. 25 pledge special.

Those stations won’t have to bring in their pledge talent or line up phone-bank volunteers for the broadcast of Downton Revisited because PBS has booked a call center in Iowa and produced customized web pages to take donations. The setup includes a unique phone number and locally branded web page for each participating station, so that viewers who pledge will be reminded that their local outlet brings PBS programming — and  Downton Abbey — to their airwaves.

In the next season of Downton Abbey, actress Shirley MacLaine joins the cast as Martha Levinson, mother of Cora Crawley, Countess of Grantham. Downton Revisited, a PBS national pledge event on Nov. 25, gives viewers a sneak peek at the new season, and invites them to pledge to their local station. (Photo: Masterpiece)

“One of things we are always looking to do, and stations are always interested in, is to convert viewers to members,” said John Wilson, senior v.p. of programming at PBS. Using Downton Abbey “is a natural in that regard. It has a huge fan base and has generated a lot of enthusiasm. We knew stations were keen on having something around Downton to pledge.”

Viewers’ fascination with the fictional Crawley family and their servants has already been a financial boon to PBS and, indirectly, its member stations. PBS concluded fiscal 2012 with an $11 million surplus, accrued in part by revenues from the historical drama, according to financial statements presented during last month’s PBS Board of Directors meeting.

Downton “is a very important property” to many stakeholders, Wilson said, including NBCUniversal, which owns the title through its Carnival Film & Television Ltd. subsidiary, and series creator Julian Fellowes. “We wanted to be very careful to make sure those folks knew what we were planning,” he said.

With a nod to the appeal of nostalgia in pledge programs, the special looks back at past shows. It also whets viewers’ appetites for more with a sneak peek at Season 3, which premieres Jan. 6, 2013.

“We made sure,” Marty said, “that we addressed the fan who knows everything about the series, as well as the person curious about the show because a friend recommended it.” Interviews with the cast and plenty of behind-the-scenes footage are also mixed in.

British stage and television actor Angela Lansbury hosts the program. The star of the detective series Murder, She Wrote was Wilson and Marty’s first choice to host the show. The pre-taped segments in which she appears were recorded in New York shortly after Superstorm Hurricane Sandy hit the city, Marty said, and Lansbury  “came through hell and high water, literally,” to participate in the shoot.

“She’s a total unbelievable fan of PBS,” Marty said. “She couldn’t stop talking about Downton Abbey. She knows all the characters. I kept telling her, ‘I’m so grateful to you for doing this,’ and she said, ‘Only for PBS.’”

The 90-minute run time of Downton Revisited includes pledge breaks, and PBS has designated it to air in common carriage at 8 p.m. EST.

The special arrangements PBS made to reinforce viewers’ relationships with their local stations reflect sensitivities over PBS’s interactions with viewers. PBS set up an independent escrow account to collect donations for each station, and is using a third-party CPA for distribution of funds to stations. No pledge revenues or donor information will be collected by PBS. There will also be a centralized premium fulfillment center to take advantage of economies of scale, Wilson said.

PBS is not taking a cut of contributions, but rather paying for the broadcast out of its general programming budget, not the separate fund for pledge programming. Stations will cover the costs of premiums, premium shipping and credit-card processing.

Premiums include Downton Season 3 DVD sets, which will ship prior to their national retail availability in January.

Stations can opt out of the nationally produced break material, but at Current’s press time at least 70 had signed on as full participants, according to Wilson. Others will insert their own local pledge breaks and manage phone banks themselves.

There is a downside to opting out. Only stations that go full monty with Downton Revisited will be able to offer a special digital thank-you gift to donors: a free Downton iPhone and iPad app, available for the first time in the United States. It normally sells in Britain for about US$4.75.

Mona Dixon, director of development at the Arkansas Educational Television Network Foundation, said AETN is “excited” about the program and plans to use the personalized number and web page provided by PBS. “I’m thrilled that PBS continues to try these national events,” she said.

Meanwhile, PBS is making good use of the revenue windfall that is thanks in part to Downton.

During the Oct. 26 PBS Board meeting, PBS Vice Chair Molly Corbett Broad, the president of the American Council on Education who serves on the board as a general director, reported that PBS had closed fiscal 2012 with an $11 million surplus. She specifically cited revenues from Downton Abbey, as well as video-on-demand services and savings from job vacancies across the organization.

PBS’s short-term investments also boosted the bottom line, according to spokesperson Jan McNamara. She declined to provide a breakdown of revenue growth by source.

The PBS Board approved PBS management’s recommendation on how to allocate the earnings: $5.5 million went to the Digital Content Initiatives Fund, $3 million to content and $2.5 million to Roadmap for the Future, a board-managed fund supporting projects that strengthen system sustainability. The balance went into undesignated net assets.