An interview that went awry for Radiolab co-host Robert Krulwich sparked an outcry from listeners and an unusual apology from a show unaccustomed to accusations of insensitivity.

The interview, conducted for a story that revisits an investigation of the use of chemical weapons at the end of the Vietnam War, has yet to air on public radio stations. It was distributed online Sept. 24 as part of a one-hour podcast, “The Fact of the Matter,” exploring the notion of truth.

The podcast was still a point of contention two weeks later at the Third Coast Conference in Evanston, Ill., where a panel that discussed ethics in public broadcasting questioned whether Krulwich and Radiolab had been fair to their sources. 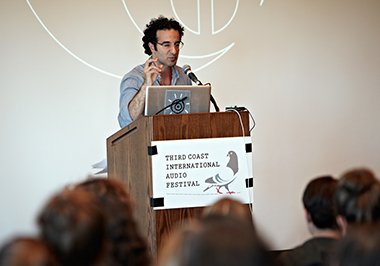 The inclusion of co-host Krulwich’s contentious interview in a podcast left the staff of Radiolab feeling “exposed” and “vulnerable,” Abumrad said at Third Coast.

In the piece, inspired by a 1991 investigation by The New Yorker, Krulwich and producer Pat Walters examine allegations that the Viet Cong used chemical weapons to retaliate against the Hmong people of Southeast Asia for their cooperation with the U.S. military during the war. The U.S. government advanced the claims of Hmong eyewitnesses who recalled seeing yellow substances fall from the sky and the decimation of crops, animals and people.

During his presidency, Ronald Reagan drew upon the “yellow rain” theory as justification for renewing America’s own chemical-weapons production. Yet an investigation by Harvard scientists more than a decade later postulated that the yellow rain was most likely bee droppings.

In reporting the story, Krulwich and Walters interviewed one eyewitness — Eng Yang, a Hmong whose village in Laos was attacked by the Viet Cong by ground and air in 1975 as yellow rain fell; he had worked with the Thai government to document his community’s experience during the war. Yang’s niece Kao Kalia Yang, an award-winning memoirist, served as his translator.

Krulwich drew upon the studies that concluded that chemical weapons had not been used on the Hmong people, asking whether Yang had actually seen Viet Cong planes dropping chemicals on his village.

In a first-person account that Kao Kalia Yang gave to Hyphen, a nonprofit magazine of Asian-American interests, she recounted how Radiolab’s producers disregarded reports she presented that challenged the scientists’ conclusions about yellow rain. The program also dismissed Eng Yang’s explanation of bee behavior, which was derived from the Hmong community’s centuries-old knowledge of bee behavior and contradicted the scientists’ findings. The account was published online Oct. 22.

Krulwich’s persistence upset the Yangs so much that Kao Kalia Yang, through tears, ended the interview early, saying, “We can play the semantics game — we can. But I am not interested . . . We have lost too much heart, and too many people.”

Reflecting on the interview after returning to the studio, Krulwich told co-host Jad Abumrad that Kao Kalia Yang’s “desire was not for balance. Her desire was to monopolize the story.”

The response from podcast listeners was swift and overwhelmingly negative, with hundreds of comments criticizing Krulwich’s attitude toward the Yangs and the program’s approach to the story. In an Oct. 10 blog post for Hyphen, columnist Kirti Kamboj called the piece “an Orientalist, ethnocentric framing and narrative” that set up a conflict of “rational Americans versus backwater Asians.”

In a letter to students, teachers and friends, Kao Kalia Yang wrote that Krulwich “grew increasingly disrespectful toward my uncle’s experiences and his lack of formal education” during the interview. The letter was posted on Tumblr and with other comments on the Radiolab website, though not by Yang.

“The story is billed as a search for truth. I am a firm believer that the truth belongs to those who’ve lived it,” Yang wrote.

Both Abumrad and Krulwich wrote about the episode in follow-up blog posts, and Krulwich apologized twice — on the show’s blog and in a recorded apology to the Yangs that was inserted into a revised version of the podcast Oct. 5.

“I have to ask questions to search for truth, but in this case, given how much Mr. Yang had already suffered, I should have done it with more respect and more gently,” Krulwich said.

Abumrad, who has the final say on all Radiolab content before it airs, told Current that both he and Krulwich regret the direction the interview took, but defended their reporting methods.

“We had never actually heard from the people who were there, and we were genuinely curious: Did they see something that would allow us to rethink the story and to rethink what the scientists were saying?” Abumrad said. “I don’t feel like an outcry of emotion should necessarily divert a line of questioning which is valid.”

The podcast will not air over broadcast radio until 2013, and producers haven’t decided how to edit it. Producers haven’t contacted the Yangs since Krulwich’s apology, and they aren’t planning additional coverage of the Hmong community, according to Abumrad.

During an address to the Third Coast Conference Oct. 7, Abumrad said including the interview in the podcast had made everyone on the program feel “exposed” and “vulnerable.” But they reasoned that, in an episode about truth, such transparency was important. He also used the incident to illustrate one of his talk’s key points: People who work in creative professions should keep pushing themselves into areas where they feel uncomfortable.

The ethics of storytelling

This level of scrutiny is rare for Radiolab, one of the most decorated shows in public radio. The program won a Peabody Award for Broadcast Excellence in 2010, and the MacArthur Foundation gave Abumrad a prestigious “genius grant” fellowship in 2011.

At Third Coast, Kelly McBride of the Poynter Institute urged journalists in attendance to think about the concept of “ethics” in broader terms than factual accuracy, saying it should also refer to fidelity to sources, to represent their viewpoints as accurately as possible.

McBride, Poynter’s senior faculty on ethics in reporting, said public-media reporters are among the most conscientious in journalism. She receives more calls for ethics consultations per capita from public-media reporters than from those working in for-profit media, and takes this as a sign that “public media has a much more thoughtful, deliberate approach to making ethical decisions.”

McBride told Current that the lack of diversity on Radiolab’s staff may have played a role in its perceived insensitivity toward the Hmong people. “I think that the people who called out Radiolab on this topic felt like that’s what happened: Because these people are not very affluent . . . because they don’t speak English, because they are so different, it’s very hard to afford them the same kind of emotional nuance that you might afford somebody who works in your own building,” she said.

Outside of Abumrad, who is Lebanese, all other Radiolab staff members are white and of European descent, according to WNYC spokeswoman Jennifer Houlihan.

While Abumrad acknowledged that diversity in public radio remains a “crucially important” issue, he disputed the idea that Radiolab has difficulty empathizing with different ethnicities.

“My parents came over to America in the early ’70s as the result of a civil war that killed over 100,000 people, and a lot of people that we knew,” he said. “Sensitivity to perspectives that are outside the norm, a sensitivity to people who are isolated, whose voices you don’t usually hear from — I get that. I still think the line of questioning in that piece is not only valid, it’s important.”

Because the Radiolab segment didn’t involve questions of factual accuracy, McBride said, it poses less of an ethical quandary than the journalistic concerns she usually hears of.

“Ethically, [Radiolab] didn’t deceive anybody. They didn’t get anything horribly wrong and cause damage by getting it wrong. They just framed their story in a way that discounted somebody else’s story, and that was hurtful,” she said.

Abumrad doesn’t know whether Radiolab will change its editorial process in light of the reactions to “Yellow Rain.” He’s determined to continue taking the program into tougher terrain.

Yang’s dispute with Radiolab extends beyond the botched interview and the material that producers left out of the final program. In her account for Hyphen, she also questioned producers’ decision not to publish a reaction piece that she said they had asked her to contribute to the website, but withheld when she submitted a piece that was overwhelmingly negative. She also appealed to WNYC Chief Content Officer Dean Cappello to request that Radiolab air a new statement from Eng Yang.

According to Houlihan, WNYC’s spokesperson, there was an abrupt shift in Yang’s interactions with Radiolab’s producers. She initially reacted positively to the story in a private email to them, but when they requested permission to publish her comments online, she withdrew them and submitted a negative critique.

The counterevidence of yellow rain that Kao Kalia Yang provided to Radiolab wasn’t mentioned in the program because it was primarily composed of media reports, not academic studies, Houlihan said. Producers elected not to incorporate Eng Yang’s knowledge of bees because they had “numerous other lines of evidence” that would have disproved his.

“The team strongly believed, based on their research and the science available, that the accumulation of evidence would not have necessarily added to the story, but certainly would have further questioned Mr. Yang’s experience,” Houlihan said.

Although Kao Kalia Yang is an admirer of NPR and spent years listening to WNYC when she lived in New York, she told Current in an email that her experience with Radiolab “has really challenged my optimism and belief in media.”

“The Hmong are not in the media very often — when we are, how we are portrayed is so critical to our own understanding of ourselves and our place in America,” Yang wrote. “Nothing in this experience has shown me that my support means anything to [Radiolab]; certainly my voice and the Hmong experience doesn’t.  Do they want my support?  I don’t know.”

Update (10/25/12): Radiolab producers have released the list of questions Walters originally emailed to Yang prior to the interview.
ShareTweet EmailPrint More

12 thoughts on “Search for ‘truth’ results in ‘Radiolab’ apology”