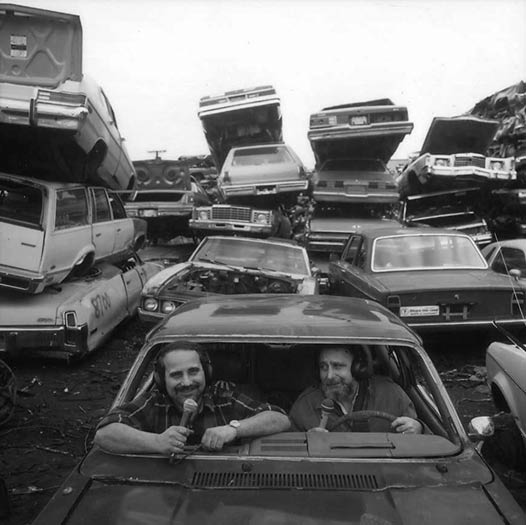 With national producers offering new programs and the Magliozzi Brothers retiring from Car Talk, program directors at public radio stations may have an opportune moment to update strategies for weekend programming. Yet with no surefire hits available beyond the familiar warhorses, all of which are at least a decade old, p.d.’s and audience researchers say there’s no easy formula for success when Saturday rolls around.

Tom and Ray Magliozzi of Car Talk, one of the most powerful programs for driving weekend listening.

The weekend staples are widely aired and well-traveled: Car Talk, Weekend Edition, Wait Wait … Don’t Tell Me! and A Prairie Home Companion. Car Talk and PHC, in particular, are public radio’s most powerful programs, with the ability to draw a station’s audience to the radio at almost any time they’re aired, says Steve Olson, president of Audience Research Analysis. Many stations air Car Talk, PHC and Wait Wait twice to get more mileage out of them.

The most widely applied strategy is to schedule these shows when the most people are listening to radio on weekends, from 8 a.m. to mid-afternoon, Olson says.

Beyond these two common strategies, stations are on their own to figure things out. In many cases, that leaves weekend afternoons as a time for a grab bag of approaches, including local experimentation, music shows and limited-run series and specials.

After the morning hours on a weekend, “you can experiment and change a program without damaging the fabric of the day,” says Mark McDonald, programming director at WAMU in Washington, D.C.

Not that programmers wouldn’t like more standout options from national networks. “We’re definitely in the market for successful weekend entertainment shows,” says Jeff Hansen, p.d. at KUOW in Seattle. But “it’s like Don Quixote tilting at windmills, trying to come up with the next big entertainment show. We’ve been trying for 15 years,” he says, referring to Wait Wait, the most recent weekend success. “We’ve come up with zip.”

“There’s a huge need for programs that stations can run on afternoons,” says ARA’s Olson. “Of course, it’s easier said than done. That’s why people are still trying.”

Part of the challenge is that, unlike public radio’s weekday successes, the weekend hits depend largely on a host’s personality — think the cackling Car Talk guys or Garrison Keillor’s trademark Lake Woebegon monologues. And personality is found and nurtured, not invented.

“You don’t know if you have a winning personality until you’ve tested it on the air,” Hansen says.

Teaming up for weekend solutions?

At Vermont Public Radio, the need for a few notable national programs on weekends may be even more acute. As one might expect in a place like Vermont, the network has many devoted listeners who listen a lot. After one airing of Car Talk, most don’t want to hear it again, says Franny Bastian, VPR’s director of programming and production.

Listeners also complain about VPR’s rebroadcast of A Prairie Home Companion, she says, but the Sunday installment attracts a larger audience than the Saturday night airing, which is mandated by producer American Public Media. So VPR persists with the two broadcasts.

Bastian says she wishes she could find a “newsy and upbeat” program for Saturday afternoons. The network arranged its own deal with the Canadian Broadcasting Corp. to carry Spark, a show about technological trends. “I think it has a strong following, but it’s just not a big enough following,” Bastian says.

Programmers looking for stronger weekend options may do well to look to each other for help instead of to national networks, says WAMU’s McDonald. “Perhaps if there were more collaboration between stations in areas of the radio market where we thought there was room for a particular topic or form of discussion … it would be good for stations to collaborate and make those shows sustainable,” he says.

WAMU is now attempting to turn some of its own local weekend productions into options for other stations. McDonald describes one such program, The Animal House, as a show about environmental issues disguised as a call-in about pets. It’s now airing on about 30 stations.

This month, the station is also piloting a series titled The Big Fix, which uses the Public Insight Network to start discussions about fixing difficult dilemmas such as the mortgage crisis or partisan gridlock in Washington. But McDonald acknowledges that even promising shows may not make it beyond the piloting stage, given the challenging economy that public radio stations face.

Jonathan Groubert of The State We’re In, one of the mission-driven weekend shows airing on WAMU.

In deciding which shows to slot into WAMU’s weekend grids, McDonald also uses what he calls “mission-driven” shows that may not be “populist” enough to draw audience during the week, such as Interfaith Voices and The State We’re In. In addition, the station has an hour on Sunday evenings for experimenting with new shows targeting younger listeners.

The challenge facing Sheila Rue, p.d. at WUSF in Tampa, Fla., isn’t scarcity but a surplus. “They’re cranking out really amazing stuff,” she says of national producers, citing in particular the continuing high quality of shows such as This American Life and Snap Judgment. “I don’t have time to deal with it all.”

WUSF’s weekend lineup is relatively new — the station moved classical music to a second frequency about two years ago and went all-news on WUSF 89.7 FM. Snap Judgment and Radiolab have done well so far, but the challenge is figuring out the best sequence for programs and promoting them well throughout the day and week, Rue says.

Differences between how people use radio on weekends as opposed to weekdays also complicate the programmer’s job. Listening drops off for weekend shows that are scheduled in timeslots when the number of people using radio falls, Rue says. “Does that mean that it’s my pick of that show or because people aren’t using the radio as much at that point?”

KOSU in Stillwater, Okla., finds itself in a situation similar to WUSF. The station recently dumped classical music. Stations in Tulsa and Oklahoma City, both within KOSU’s service area, were already airing classical; KOSU was not the first choice of classical listeners in those markets, says Rachel Hubbard, associate director and g.m.

Last month the station teamed up with a commercial Triple A station that had gone online-only because its format was too niche to draw a substantial broadcast audience. Together, the stations created a music lineup for KOSU that features local musicians hosting a diverse range of shows, in genres such as punk, techno, rockabilly and psychedelia.

KOSU also cut repeats of Car Talk and Prairie Home Companion, which prompted less of a backlash than Hubbard expected. Like WAMU, the station also has time set aside on Sunday for piloting new local or national shows.

The new music programming has netted a positive response from listeners “because it’s local, instead of syndicated programming that we’re pulling down,” Hubbard says. “It’s been an amazing ride the last couple of weeks.”