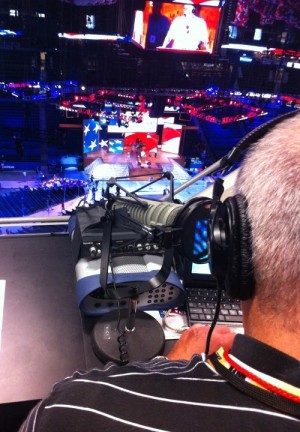 WUSF host Craig Kopp looks down on the floor of the Republican National Convention.

Here’s a roundup of how some public radio outlets are covering the party conventions.

NPR will air special coverage during the conventions from 8–11 p.m. each evening, hosted by Jennifer Ludden and corralling reports from the 30-person teams dispatched to each location.

Bloggers will provide a second tier of coverage with periodic updates, and additional reports will go deeper with content and perspective. Reporters will also fact-check statements made by speakers.

Digital staffers will deliver the content in ways that are more mobile-friendly, a change since 2008, Katz says. NPR will apply lessons it learns from reporting on the conventions to its coverage of the presidential debates.

The multimedia radio/video/online Democracy Now! is reporting from WEDU, the PBS affiliate in Tampa, Fla., for the Republican National Convention and will visit Charlotte, N.C., the following week. Its morning broadcast, retitled Breaking with Convention: War, Peace and the Presidency, will expand from one to two hours.

In keeping with its usual thrust, the show will aim to feature interviewees overlooked by other media outlets, says Amy Goodman, host and executive producer. With the mention of war and peace in its name, the show is taking up a subject that the candidates have mostly ignored as they’ve taken shots at each other.

“It’s absolutely critical, when soldiers are sent into harm’s way, that that be on the front burner,” Goodman says.

After the Democratic convention, Goodman and the show will embark on a two-month, 100-city tour that will include the National Educational Telecommunications Association’s conference in St. Louis Oct. 30 to Nov. 1. The tour coincides with the publication of Goodman’s new book, The Silenced Majority: Stories of Uprisings, Occupations, Resistance, and Hope. Along the way, she’ll stump for public stations at fundraising events.

“It’s very important in an election time that people in communities know there is independent public media,” Goodman says.

WUSF host Craig Kopp looks down on the floor of the Republican National Convention.

The Tampa public radio station WUSF has put together its largest team ever to cover the Republican convention — 27 staffers, three times the normal size of its news department. It has divided reporters into three beats: politics; protests and security; and the convention’s economic impact on the city, as well as human-interest stories.

WUSF will focus most of its coverage on how Tampa is handling the event. Residents are worried about traffic and security and also about how the media are portraying Tampa to the rest of the country, says Scott Finn, news director. Some of the coverage has been negative.

“The convention is leading us to re-examine ourselves,” Finn says. “It’s making us see ourselves through outsiders’ eyes and making us rethink who we are as a community.”

The station will deliver coverage to the Florida News Exchange, a story-sharing network hosted by the Public Radio Exchange. Most stations in Florida use the Exchange, and Finn expects many will take at least spot news reports from the network.

Miami’s WLRN has loaned a reporter to WUSF for the week, and the Tampa station has brought back former interns to add to the team. It is expanding its morning news show and adding a half-hour of coverage in the evenings.

Videographers are shooting high-quality footage for use on WUSF’s website, and the station is also using Storify to compile photos, links and tweets.