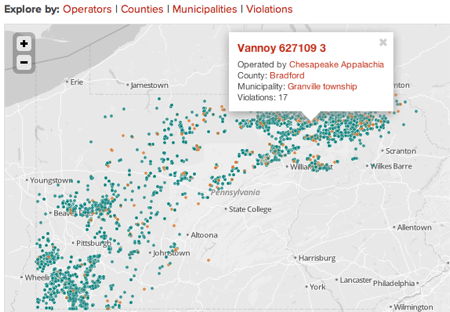 NPR’s map of fracking sites in Pennsylvania shows which well drillers have been cited for environmental violations. Green dots signify no violations; orange means one or more.

NPR’s map of fracking sites in Pennsylvania shows which well drillers have been cited for environmental violations. Green dots signify no violations; orange means one or more.

NPR is stepping up its efforts to innovate in digital news by expanding staff and hiring Brian Boyer, a programmer known for his work creating interactive web presentations for the Chicago Tribune.

Developers at NPR have been already been working on news apps, such as a map created for the network’s Poisoned Places project depicting industrial facilities releasing hazardous chemicals. Another app for the collaborative StateImpact project maps natural-gas extraction sites in Pennsylvania.

Stations have also moved into news apps in recent years, in particular New York’s WNYC, which won an Online News Association award last year for a map tracking snow removal after a blizzard hit the city in December 2010.

With the addition of Boyer, NPR plans to create more news apps and make them easier for stations to localize for their websites. It also will help station journalists develop their own apps and create tools to simplify the development process. Another top objective is to enhance usability of its news apps on tablets and mobile devices.

News apps may be a departure from radio production, but they enhance the presentation of investigative reporting done by network journalists, who gather large amounts of data but can only summarize or cite a fraction of it in the broadcast versions of their stories. News apps allow web users to navigate vast sets of data as easily understood maps, charts, graphs and tables, and to contribute their own reporting.

“This is one of the most dramatic ways that we can complement the kind of journalism that we’re known for doing on the air,” says Mark Stencel, managing editor for digital news at NPR. “It lets us tell stories with documents and data that are often difficult to convey on the air.”

Stencel and Boyer also hope to take news apps in a new direction by making them easily viewable on tablets and smartphones. “There’s an opportunity for us to leapfrog and find really imaginative ways of presenting this kind of work to a mobile audience,” Stencel says, because NPR is less attached to the news-media standard of designing online news to be viewed first and foremost on laptops and desktop computers. “We want to move news apps into the mobile space, and that’s something that everyone is trying to figure out how to do.”

“Our work, I would imagine, is going to be almost all designed with mobile in mind first,” says Boyer. Designing for mobile forces creators to prioritize by deciding which information is most important. “News websites have problems with setting priorities,” Boyer says.

Answering “What about me?”

At NPR, Boyer will report to Stencel and oversee a team of designers, developers and journalists pulled together from separate digital initiatives. The network is also hiring new developers to join the group.

Before taking a path into journalism, Boyer was a software developer for startups and burned out on the work. “I wanted to do something more impactful and important than just making rich people more money,” he says.

He was considering pursuing a degree in law or policy when he learned that the Knight Foundation was offering programmers scholarships to the Medill School of Journalism at Northwestern University. He received one of the first two scholarships awarded, in 2008.

After an internship at ProPublica, Boyer joined the Chicago Tribune in 2009. As news applications editor, he worked on projects such as an app that could tell high-rise residents whether their buildings were in compliance with fire-safety codes. Another allowed web visitors to search safety records of nursing homes in Illinois.

Boyer expects that his work for NPR will be similar to what he produced at the Tribune, but he’ll take on the task of working with stations. “What I hope is that we’ll be able to work with the member stations to tell a local story that’s of national interest and make it both locally and nationally relevant,” he says. “I like our work the best when someone asks the question, ‘What about me?’ and we can answer it.”

In his new audio-enriched digs, Boyer may also explore ways of integrating audio into news apps, an area in which developers “are just barely scratching the surface,” he says. These efforts might involve Popcorn.js, a multimedia programming tool developed by Mozilla that syncs audio and video with the user’s interaction with web pages.

Not all of Boyer’s work has been as public-facing. He has also developed tools to help journalists, such as PANDA: A Newsroom Data Appliance. The web-based system allows journalists to store, share and analyze data. Reporters can also create alerts to be notified when new information enters the system and meets certain criteria, so they could learn of especially large gifts to political campaigns, for example.

As it develops more news apps, NPR will pursue reporting partnerships such as the relationship with the Center for Public Integrity that produced a data map of Poisoned Places.

Programming can help journalists sift through huge amounts of data in much less time, and Boyer says it doesn’t take much knowledge to make a difference. “You don’t have to be a really good programmer to be better at your job,” Boyer says. “You can be a pretty bad programmer.”

NPR will pursue funding from foundations to support development of its news apps and will continue to explore collaborations with other organizations, such as the Center for Public Integrity, a partner on Poisoned Places.

“This is a classic example of the kind of reporting where it makes much more sense to team up than it does to compete,” Stencel says. Guided by an open-source ethic, news-app developers seek to share data and encourage each other to use it in new ways.

Boyer’s hire at NPR prompted buzz among other developers and new-media journalists. “It’s terrific for the entire system that Brian has been brought on board,” says Tom Hjelm, chief digital officer at WNYC.

The New York station has been among the most active creators of news apps in public radio. To follow up its award-winning app mapping snow removal, it created an app that helped web visitors learn whether they lived in flood zones when Hurricane Irene hit New York last year.

WNYC has hired a JavaScript developer and will recruit a designer to expand its news apps, Hjelm says. He looks forward to having a larger team that will able to respond more quickly to news of the day as it creates apps.

“There’s no shortage of stories to be told with this data,” Hjelm says.