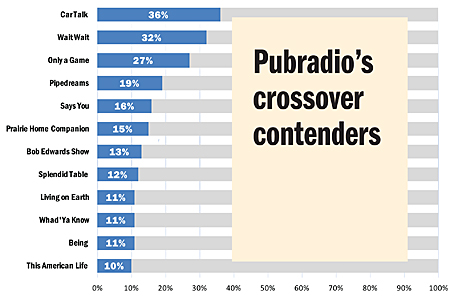 Among stations carrying these titles, the shows attain above-average loyalty for both core and fringe listeners at these percentages of the stations. Car Talk not only has a relatively wide mix of these audiences but also airs on a large number of stations. Not every program works as well for every station for both core and fringe listeners, and in every timeslot, with every adjacent show, according to Audience Research Analysis, which computes the figures for the Power Perspectives reports cited in this article.

You may not think country singer Kenny Rogers and the Tappet Brothers have much in common, but they do. Kenny Rogers was the king of crossover music in the 1970s. His hits “The Gambler” and “Lucille” showed up at the top of both the country and pop charts. With his husky voice and mass appeal, he made country cool for a wider range of people.

Among stations carrying these titles, the shows attain above-average loyalty for both core and fringe listeners at these percentages of the stations. Car Talk not only has a relatively wide mix of these audiences but also airs on a large number of stations. Not every program works as well for every station for both core and fringe listeners, and in every timeslot, with every adjacent show, according to Audience Research Analysis, which computes the figures for the Power Perspectives reports cited in this article.

Car Talk has always done well with core listeners, but it also has a uniquely powerful ability to attract both core and fringe listeners whose loyalty to the program is above-average. According to the Audience Research Analysis Fall 2011 Power Perspectives Report, 36 percent of stations that air Car Talk attracted above-average core and fringe loyalty. That percentage is higher than any other public radio program, including the NPR newsmagazines. The only other program that comes close is Wait Wait . . . Don’t Tell Me!, with 32 percent of carrying stations seeing strong core and fringe loyalty.

Crossover appeal plays a vital role in public radio’s growth. Many of our best programs — including the top daily newsmagazines — have it. It could be argued that public radio’s focus on programs with this kind of appeal has helped drive the audience growth we’ve seen over the years. If public radio wants to expand its audience, crossover shows may be the key to turning fringe listeners into core.

If Car Talk is the Kenny Rogers of public radio, we need to find a Shania Twain for the weekends. Very few programs within public radio’s weekend lineup have strong crossover appeal. On the weekends, only 20 programs attract loyalty from core and fringe listeners on 10 percent or more of their stations. Only 12 of these programs have measurable audience on 30 or more stations (see chart above).

As we think about developing the next Car Talk, it’s useful to look at a few of the shared characteristics of programs in public radio’s portfolio of crossover shows.

Beyond Tom and Ray Magliozzi, one of Car Talk’s biggest assets is its subject matter. It deals with a topic that nearly everyone can relate to because most people have cars. We may succeed in creating new crossover hits if we focus on topics of broad general interest.

Many years ago, producers tried to turn this insight into gold. When Car Talk became popular, many rushed to create shows that focused on different subjects yet had a similar appeal. We did Car Talk with pets, Car Talk with health and many similar varieties of shows.

Since none of these programs became as popular as Car Talk, the conventional wisdom around “what works” moved away from this approach.

Where does talent come from?

When public radio tries to create new hits, it often looks outside the family for on-air talent. We hire people with little or no radio experience to host shows because we think writers, comics or musicians are much more entertaining than anybody we may have in-house.

While modesty and self-deprecation can be endearing, it’s a mistake to assume that new hits come from outside public radio. Before he created This American Life, Ira Glass produced many driveway moments as an NPR bureau reporter. Carl Kassel served as a longtime newscaster at NPR before he showed his funny side on Wait Wait . . . Don’t Tell Me! Even Car Talk began its national run as a segment on Weekend Edition Sunday — and that came after a decade of incubation as a local show on WBUR. Both A Prairie Home Companion and Whad’Ya Know? drew on morning talents who had years of experience at engaging audiences on local radio. These examples show that established talent has value.

Commercial media know that established talent has great potential to attract audiences. The cable channel TV Land has begun producing original shows with the TV stars of yesteryear. Hot in Cleveland is a great example of this: It brought together sitcom actors such as Valerie Bertinelli (One Day at a Time), Jane Leeves (Frasier), Wendie Malick (Just Shoot Me) and Betty White (Golden Girls) to create something new. The program has achieved critical acclaim and attracted audience for TV Land. Another example is ABC’s The View, which uses ABC News veteran Barbara Walters as a key panelist.

The sad part about established talent in public radio is that we insiders often tire of our most popular people before our listeners do. There’s a certain thrill to adding new programs to the lineup, but I’ve been surprised to see how quickly we’re willing to drop popular shows first for something untested.

During my years handling national programs for Public Radio International, I often saw successful shows lose airtime because program directors tired of them and decided to try something new. Now as a station programmer, I often remind people that long-running hits are still hits. In the wake of the Car Talk announcement, public radio could easily write off established programs before they stop working for listeners. Based on what we know of the past, this may be short-sighted.

Bob Edwards provides a perfect illustration of our ambivalence with known voices. When Bob Edwards left NPR after almost 25 years at the helm of Morning Edition, few programmers or network executives envisioned the former host launching the brand-new show that he created from scratch after leaving NPR. Despite this, 13 percent of the stations that now carry Bob Edwards Weekend attract above average core and fringe loyalty.

Hip may not be where it’s at

If you look over the list of current crossover programs, few could be described as “hip.” Yet whenever public radio worries about attracting new listeners, we tend to aim for a hip new sound.

I once suggested that public radio’s attempts to sound cool are as appealing as a “50-year-old guy with a nose ring.” I wouldn’t go that far today, but I still believe that we need to be careful about outpacing our audience with programs that try too hard.

Public radio listeners are much less obsessed with hipness than we think they are. Research done a few years ago by Public Radio International showed that our listeners aren’t very interested in what’s hot, or cool, or buzzworthy. They’re more interested in substance than the latest trends. They might get their fill of hip programs from other media outlets and come to us for an oasis from that. Who knows?

My reservation about the current crop of new programs angling to be successors to Car Talk is that some have self-consciously hip sensibilities. In some cases, new shows have been anointed successes before attracting the audiences they need to prove themselves. Some of these programs have succeeded with live audiences, but it may be too soon to know how radio listeners will react to them.

Programmers and production executives need to remember that our successes have come from being focused on our audience, not our aspirations. This may be one case where breaking a hip might be good for public radio. In fact, we may be more effective at diversifying and growing public radio by aiming for the 99 percent of us who are unhip. (This estimate was not arrived at scientifically.)

Kenny Rogers’s classic “The Gambler” talked about the value of knowing “when to hold ’em” and “when to fold ’em.” At a time of transition in public radio, we probably need to develop our skills in holding the good stuff.

Michael Arnold is director of content for Wisconsin Public Radio. During his 26-year career in public radio, he’s been involved in the production design, programming and distribution strategies of many new public radio shows, including a few that aimed at the young and hip.
ShareTweet EmailPrint More