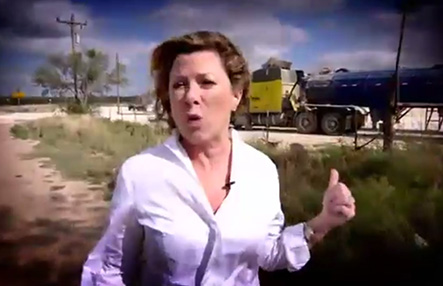 The advent of Al Jazeera America (AJAM) on cable television can reawaken broadcast journalists — indeed, all television viewers — to the value of provocative news coverage.

“News” to me is more than bits and pieces about political or social changes. It’s also the full-length documentary and the revealing film about the ways people live their lives.

As I began watching AJAM last fall, I couldn’t help but compare its coverage to that found on other broadcast and cable outlets. To my dismay, the stagnation of innovation and daring in public and commercial TV news and documentaries became immediately evident.

Watching television with a critical eye comes naturally to me. In addition to producing and commissioning programs for public TV for 50 years, my career has included critiquing television award entries for both the Radio and Television Digital News Association and the duPont-Columbia Awards. As writer/producer of RTDNA’s Edward R. Murrow Awards for nine years, I screened more than 600 video news segments. It was the sort of assignment that stayed with me and that I recall while flipping through television news channels, looking for something that stands out from all the rest.

So when I first began watching AJAM, I realized that the men and women behind this network are giving us all a lesson in how news and public affairs programs can expand the ways we look at our country and the world around us.

Those who have worked in the broadcast field for as long as I have can remember moments of innovative brilliance in some of public television’s early programs —The Great American Dream Machine, the first-ever television magazine, mixed comedy and cultural segments with sociopolitical coverage; SOUL!, which aired from 1968-1973, was the first ongoing series to bring the full range of African-American culture and politics to television.

WNET’s The 51st State looked at New York City with a broad definition of news, and Staggerlee, produced by KQED in San Francisco, was a gutsy documentary about Black Panther leader Bobby Seale. Let’s not forget the irreverent and insightful Vote for Me: Politics in America, the independently produced miniseries broadcast in 1996.

These shows broke boundaries and rules, both aesthetically and politically. They tickled our fancies and stretched our imaginations. And if they ruffled feathers, that was instructive and useful, too.

Now — with notable exceptions such as Frontline, Bill Moyers Journal and the occasional documentary from POV or Independent Lens — I find that most nationally distributed public TV series are uniform, docile and dull. They don’t challenge me as a viewer and citizen of the world.

When I switch among commercial network channels, I find little difference in the stories they choose to cover. The treatments are also docile and predictable, regardless of whether I’m tuned to a broadcast network, cable outlet or local station. CNN hosts shout a lot and present graphic gimmicks. Fox and MSNBC go for fisticuffs. When network anchors debrief correspondents reporting from Europe, Asia and the Middle East, the conversations feel staged.

American television networks are fully capable of responding to crises: producing very good coverage of the Tunisian and Egyptian revolutions, for example, or the tragic school shooting in Newtown, Conn. But the networks don’t produce full-length documentaries of any note about the important issues of our time. By that I mean 30- or 60-minute films with deep reporting that gives viewers insights into the backstories of events in the news. Three- to five-minute clips, the staple of network news programs, won’t cut it. Despite recent journalistic lapses, CBS’s 60 Minutes mostly does a fine job each week with its signature 15-minute reports, but it is the sole exception.

Just as music aficionados find it difficult to convey the essence of a Beethoven symphony or a Beatles song by talking about them — you have to hear them to get their depth and breadth — so it may be with AJAM.

But I can tell you this: I haven’t sat up and taken notice of more than half a dozen commercial or public TV shows in the past year the way I have with AJAM. I am being made to think, to ask questions, to seek answers on my own.

Nothing is spoon-fed. It’s not pap. It’s not boring. It’s actually engaging and, dare I say it, often entertaining. It’s good-to-watch television again.

AJAM feels live, unrehearsed, dynamic and wide-ranging. Documentaries are allowed to stand on their own, without appendages of follow-up studio chats or commentaries that dilute their premises. Signature programs have been developed for different purposes and appeal to distinct audiences; some air daily, others once or twice a week.

For instance, AJAM serves up smart and novel riffs on technology in the weekly series Techknow, with four young scientists taking us on 10-minute tours of groundbreaking ideas in electronics, biology, and firefighting, to name only a few. Then there is The Stream, a nightly program that features two on-camera hosts engaging experts directly, reading Twitter responses and cutting to Skype to get live viewers’ comments, some of which are sharper than the experts’.

Fault Lines presents in-depth documentaries about serious issues such as the safety of factories in Bangladesh, shootings by the U.S.  Border Patrol into Mexico and the fracking wars in the U.S. and Canada. It airs twice a week.

Al Jazeera America Presents is a weekly series of documentaries that look into more personal matters. One documentary on returning soldiers taught me more about post-traumatic stress disorder than all the bits and pieces I’d watched on commercial and public television.

America Tonight, AJAM’s main news program at 9 p.m., takes long and detailed looks at topics such as the continuing Fukushima disaster, patients who suffer from chronic fatigue syndrome, the battle to restore Detroit, and labor unions in America and abroad.

Among the exceptional coverage in one week alone, I noted reports on a wide range of domestic and international topics — from the treatment of deaf men in prison to the fates of children working in Asian factories. A piece on the revolution in East Timor featured clandestine footage shot over years by some of the participants, and a story from the Middle East reported on Israeli pacifists who teamed up with Palestinian protesters to speak out against the building of the wall along the West Bank.

Each of these stories was given more time than the three-minute news bites found on other networks.

One of the major benefits of watching AJAM is that it covers news from other countries in detail, making the rest of the world matter as much as America. Another is that its executives are flexible in deciding what to cover and when.

For example, on Dec. 26, the day after Christmas, AJAM cut into its regularly scheduled programming to cover remarks delivered to the United Nations by U.S. Ambassador Samantha Power. She discussed three important arenas of world conflict — Syria, Egypt, and South Sudan — and  AJAM presented an extended excerpt. That same day, as CNN reported on shoppers returning unwanted Christmas gifts, AJAM presented a long interview with an American reporter who had been held captive by the Taliban.

Another refreshing feature of AJAM is the galaxy of diversity represented in its  on-camera personnel. Tony Harris handles the top anchor job with a sense of humor and versatility. Some AJAM reporters and co-anchors work from studios in Qatar and London; others are based in New York or Washington, D.C. They are light- and dark-skinned, Asian and Middle Eastern, American and English.

The lessons to be gleaned from AJAM’s fresh take on news for American audiences are many, but for public TV professionals, consider these:

Christopher Lukas produced and directed programs at New York’s WNET in the late 1960s and was the decision-maker who commissioned production of Soul!, among other programs. During a stint at KQED in San Francisco during the 1970s, he worked as a producer/director and executive producer. He was also a senior producer for Alvin Perlmutter for a decade. In addition to producing hundreds of hours of documentary and other TV programming, he has published six books on a variety of subjects. Today, near 80, he continues to make documentaries.
ShareTweet EmailPrint More

5 thoughts on “Al Jazeera America: A news model pubTV should look to emulate”