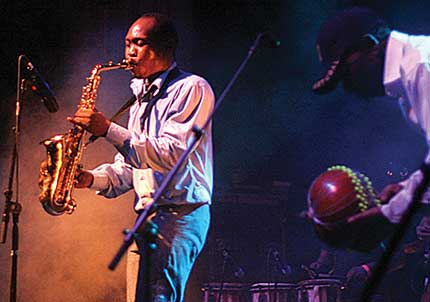 Many overseas stars, such as Nigeria’s Seun Kuti (above), appear in the online shorts (such as this one), but Talbot expects most acts to be American. (Photo: Mirissa Neff for Sound Tracks.)

Many overseas stars, such as Nigeria’s Seun Kuti (above), appear in the online shorts (such as this one), but Talbot expects most acts to be American. (Photo: Mirissa Neff for Sound Tracks.)

Steve Talbot worked in public TV for more than 20 years before trying his hand as chief fundraiser for one of his own projects. His timing was not the greatest.

On the day in 2008 when Lehman Brothers imploded, PBS agreed to back the pilot for Talbot’s Sound Tracks, a newsmagazine-style show about contemporary music around the world. The hourlong debut, which aired in January 2010, got positive feedback from viewers, programmers and PBS, but the recession has hampered Talbot’s efforts to make more episodes of Sound Tracks ever since. He’s still raising money to produce additional episodes.

“I picked the absolute worst time in my life to try to do this,” he says.

Nevertheless, he’s plugging away at his quest to present music on public TV in a new way. Rather than focus only on live or in-studio performances, as most of its predecessors have, Sound Tracks aims to depict music and its creators within a broader context grounded in reporting, by linking the art to the cultures, politics, and personal experiences that spawn and surround it.

Money may be in short supply, but Talbot and his co-producer Marco Werman, who has covered international music for years on PRI’s The World, have set a high bar for themselves. They both say they want Sound Tracks to be “the music show on PBS.” “That sounds a little arrogant or ambitious,” Talbot says, “but that’s okay by me.”

Their ambition now hinges on whether Talbot and San Francisco’s KQED, which is partnering with him to produceSound Tracks, can raise enough money to match an National Endowment for the Arts grant. In the meantime, Sound Tracksis staying in production and making a name for itself online with a series of video segments, Quick Hits, featuring interviews and performances from an eclectic array of artists. The videos are among the most popular on the PBS Arts website and are also appearing on Salon.com, which was founded by Talbot’s brother, David.

Talbot “has really bitten off something here that is both smart and different,” Wilson says, citing the show’s distinctive approach to covering music and its roster of correspondents, most of whom Talbot recruited from Frontline/World, his previous project.

The executive producer has also been seeking partnerships with music presenters and producers in his hometown of San Francisco and beyond.

“There are so many great stories in music, and I’m glad that we finally have a show that’s dedicated to highlighting these stories,” says Judy Tsang, director of programming for the Stern Grove Festival Association, which stages an annual series of summer concerts in the city. “Artists have so many interesting stories. . . . They’re part of our culture. They’re part of the world’s culture.”

Sound Tracks evolved from Talbot’s career in documentary work and Werman’s longtime focus on international music. Now senior producer and frequent host of PRI’s The World, Werman’s radio career has always mixed music and journalism. While working for the BBC’s Network Africa broadcast, Werman selected songs to air between news and talk segments. Later he incorporated music into a two-hour daily news show he hosted on a radio station in upstate New York.

But Werman’s most enduring and well-known showcase for his musical knowledge has been The World’s Global Hit segment, which he launched as a co-founder of the show in 1995. The daily segment presents a song, story or interview focusing on an international musician, often one that most listeners wouldn’t hear of otherwise.

At first, the music segments on The World lacked context and confused listeners, Werman says. That prompted him to shape the segment into a more regular feature, and its popularity took off. Listeners often wrote the show for more information about the music, much as listeners to NPR’s newsmagazines have — a trend that inspired the creation of the network’s All Songs Considered web show.

Meanwhile, Talbot was launching the internationally focused Frontline spinoff, Frontline/World, in 2002, and he tapped Werman for profiles of international musicians. “After the third story, we started saying that a whole hour of this would make a great series,” Werman says. When Talbot left Frontline/World in 2008, “that’s essentially what we decided to start plotting to do.”

Though Werman has covered music mainly for radio, he says he realized at times throughout his reporting how film could add another dimension to his storytelling. In 2000 he visited guitarist Ali Farka Touré at his farm in Mali and was struck by the dramatic landscape and setting.

“There’s a whole context of where a musician comes from, what it looks like, where they are, that feeds the sound and lyrics of their music,” he says. “Those little nuances are really hard to capture on radio.”

Werman’s contribution to the pilot episode of Sound Tracks is a case in point. He traveled to Lagos, Nigeria, to interview Seun Kuti, who makes politically charged, danceable funk music, following in the footsteps of his father, Afrobeat legend Fela Kuti.

Werman’s on-camera interview with Seun Kuti was interrupted by the sound of gunfire in the street outside the musician’s home. Kuti, Werman and his crew rushed to the window to see a man with a bloodied leg who had been shot and robbed in broad daylight. Neighbors gathered to see the bloodshed, but no one called police because Lagos cops are notoriously corrupt and ineffectual.

In fact, Kuti often sings of the corruption plaguing Nigeria in his music — much as his father did — and he was telling Werman about these chronic problems when the shooting began. The intersection of art and politics is just the kind Sound Tracks seeks to portray.

Werman had witnessed gunfire in the field but had never seen a victim bleeding in the street. “The timing of it was uncanny,” he says. The cameraman was unable to capture the incident, but Werman snapped some digital stills, which ended up in the final Sound Tracks segment.

Other stories on the pilot also explored the intersection of music, politics and national identity. One segment showed young Russians swaying to the beat of a hit song idolizing Prime Minister Vladimir Putin, written by a major national hitmaker who had no reservations about pimping out his songcraft for politics [video].

Another segment tells the story of a symphony written for an orchestra in Kazakhstan by the brother of comedian Sasha Baron Cohen, who famously tarred the country’s reputation in his hit movie Borat: Cultural Learnings of America for Make Benefit Glorious Nation of Kazakhstan. The Sound Tracks segment presents the moving piece as a way of making amends for Borat’s vicious satire. “If atonement has a sound, this could be it,” says reporter Arun Rath.

Rath and Alexis Bloom, who reported the Putin segment, are both alums of Frontline/World. Rounding out the show’s stable of contributors is Mirissa Neff, art director for the San Francisco Bay Guardian and a professional deejay. On the pilot, Neff introduces a performance by Portuguese fado singer Mariza, which fills out the show’s last segment. FutureSound Tracks episodeswill also end with recorded performances.

The pilot might give the impression that Sound Tracks will focus exclusively on music outside the U.S. But Talbot and Werman are planning to flip around the lens and feature mostly American artists if they can fund future episodes, though the mix will remain eclectic.

PRI’s The World begins shaping its distinctive reason for being, 1996.

The program reports on “A Man Like Putin” (“I want a man like Putin, who’s full of strength…”). The song has been translated into English.

Sound Tracks can’t get too esoteric, he says, and viewers need to know they can see musiciansthey already know when they flip to Sound Tracks. As long as the show focuses on why musicians make music, “it doesn’t matter as much where the stories come from,” Werman says.

More than half a million viewers watched the Sound Tracks pilot, which aired on 96 percent of public TV stations in January and February 2010, according to TRAC Media Services. It also became one of the most-viewed videos on PBS’s website during that time.

PBS doesn’t look to ratings as a primary gauge of success for a one-off pilot such as Sound Tracks, Wilson says. More important is that the show got a good response from programmers, he says.

With Werman on board and music as a focus, the show has potential to bridge the audiences of public TV and the younger-skewing public radio, a prospect that appeals to Wilson. “The NPR audience is the next generation of the PBS audience,” he says, “so we want to connect those and make sure that the NPR audience understands that they’re welcome at PBS and that we have things for them.”

Because the pubradio audience is more similar to PBS’s online users, expanding Sound Tracks into the online Quick Hits series has made sense, Wilson says. PBS Interactive and the joint CPB/PBS Diversity and Innovation Fund put up the money for a monthly Quick Hits segment. Episodes so far have featured Seun Kuti, world-music/fusion outfit Dengue Fever, soul singer Charles Bradley and others.

Making Quick Hits videos keeps the Sound Tracks team busy and on the radar of music lovers while Talbot and KQED try to raise production money in a challenging economy. The NEA pitched in $200,000 and encouraged Talbot to apply again for more. Talbot and KQED are now approaching individuals, foundations and corporate sponsors for support.

The broadcaster has had success during the downturn in raising production funds for cooking and kids’ shows, says Michael Isip, v.p. of television. Funding for news and public affairs programs have been a harder sell due to editorial firewalls, he says, but he expects Sound Tracks will be able to skirt those limitations.

Though fundraising has its challenges, Talbot has no shortage of enthusiasm or ideas for Sound Tracks. He envisions sponsoring screenings, tapings and live concerts in collaboration with public broadcasters and others, including Fantasy Studios, a film and music recording studio based in Berkeley, Calif.

Talks with Fantasy began after studio director Jeffrey Wood saw the Sound Tracks pilot on TV. The show struck him as a “hipper” showcase for contemporary music than most PBS programming, he says. “It’s much more exciting and covers a wider spectrum than what has been presented,” says Wood, who has worked as a record producer for more than 25 years.

“We’ve got the energy to do it,” Talbot says of Sound Tracks. “We just need a little more money.”