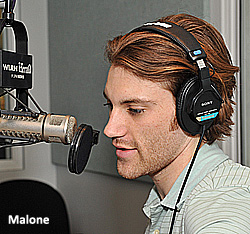 WLRN Radio and the Miami Herald have been collaborating on multiplatform news production for eight years, but the investigative-reporting package that they published this month, “Neglected to Death,” took their partnership to a new level.

The package of radio reports by WLRN’s Kenny Malone and articles by Herald reporters grew out of a year-long computer-assisted reporting project that revealed systemic failings in the regulation of Florida’s assisted-living facilities.

Over several months, Malone followed up on the Herald investigative team’s findings of incidents of negligence and abuse to produce two character-driven radio features, the first of which aired locally and on NPR’s Morning Edition. Malone’s first piece focused on the case of Aurora Navas, an 85-year-old Alzheimer’s patient and facility resident who wandered outdoors one night without supervision and drowned in 18 inches of water. It was one of many accidental deaths for which Florida regulators failed to probe or prosecute.

In another case, the body of a former Episcopal priest with dementia was discovered mauled by alligators, the Herald reported.

A decision to put a radio reporter on the investigation early in the research process distinguished this Herald exposé from earlier reporting projects, according to Rick Hirsch, Herald managing editor, who has managed the WLRN editorial partnership from the outset. Malone and WLRN News Director Dan Grech sat down with the Herald’s investigative reporters several months ago to identify stories that would be best told on an audio platform. “That is something that really worked,” Hirsch told Current. “Kenny Malone spent months reporting those specific angles.”

“The other thing that was different is the radio group was very aggressive not only in pursuing the stories, but also in pushing them up to NPR,” Hirsch said.

WLRN did it by excusing Malone from some of his day-to-day duties as a general assignment reporter, freeing time to mine the Herald’s database, track down sources and coordinate his work with the investigative reporters.

Michigan Radio in Ann Arbor and KUOW in Seattle have taken veteran reporters out of the daily news cycle and assigned them to investigations that exposed nepotism, excessive compensation and questionable ethics among policymakers and nonprofit executives.

The reporting by Lester Graham, a Michigan Radio news veteran reassigned to investigations last summer, is “ruffling some feathers,” said Vincent Duffy, news director. “If you have an investigative reporter or accountability journalist in your newsroom, you have to have a news director with a thick skin,” he said.

“This kind of partnership is fairly new, and there’s no reason we couldn’t or shouldn’t be doing it a lot,” said Steve Drummond, senior national editor for NPR. Drummond edited the WLRN-Herald story for NPR broadcast and sees a parallel to the outside partnerships developed by NPR’s own investigative unit since it was established in January 2010.

“This is not to say that we haven’t had investigative projects like this from stations before,” Drummond said, “and it’s not the case that they’ve just discovered enterprise reporting.” But he sees some stations making bigger commitments to local investigative work.

WLRN’s editorial relationship with the Herald is unique among public radio news outlets, and the national relevance of the investigation of assisted-living facilities was clear, Drummond said.

The first station collaboration to begin to bring local investigations to NPR listeners was KQED’s partnership with the nonprofit newsroom California Watch, according to Drummond.

That partnership. now in its second year, expanded to video for its most recent California Watch collaboration, providing a KQED-TV special on California schools’ inadequate seismic safety standards, according to Raul Ramirez, KQED director of news and public affairs.

Like Hirsch of the Herald, Ramirez said there’s a big payoff when pubradio journalists are assigned to collaborate closely with the investigative team, doing original research and reporting that plays to the strength of the radio medium.

“It’s a question of being in the mix early enough so we’re there helping to develop material and looking for radio stories,” Ramirez said. “Over time, you learn lessons…. There are various ways to come at it, but there’s no magic bullet. And it doesn’t always work.”

“The biggest demonstration of a commitment is to have a reporter assigned to do investigative reporting almost exclusively,” said Jeff Hansen, KUOW p.d.

“For local stations to have that level of commitment is fairly major.”

That’s a commitment that his station and Michigan Radio have made — hiring or assigning reporters to full-time investigative work.  Hansen informally surveyed news stations in top markets last fall and found that many are doing collaborations or other types of investigative reporting without devoting a full-time reporter to the beat. Reporters typically mix their enterprise/investigative work with daily assignments, as Kenny Malone did for WLRN.

KUOW’s emphasis on local accountability journalism, like Michigan Radio’s, grew from a strategic decision “to turn much of our attention to entrepreneurial, investigative, higher-impact reporting,” he said.

Patricia Murphy, a KUOW reporter who devotes much of her time to investigative work, recently collaborated with Seattle Times reporter Hal Bernton  on “Weight of War,” about the chronic pain that besets soldiers who routinely carry heavy gear and body armor. The partnership with Bernton evolved organically after the two reporters discovered they were pursuing similar stories and decided to cooperate rather than compete.

Hansen was pleased that NPR picked up Murphy’s piece for broadcast on Weekend Edition last month, but he said a national airing isn’t the best way to evaluate the impact of a local investigation. “The point of local investigations is doing things that might not hit the national level. Our reports were statewide, but they dealt with things that were definitely local issues.”

The benefits of partnering with a major local newspaper are considerable, and Hansen hopes Murphy’s work with the Seattle Times on “Weight of War” will lead to more such partnerships. Major dailies “have historically developed that as a core component of what they do, and they have experience, resources, skills and contacts,” Hansen said. “Public radio is a little newer at it.”

Michigan Radio was responding to the decline of local accountability journalism conducted by the state’s major daily newspapers when it assigned Lester Graham as its full-time investigative reporter last June, according to news chief Duffy.

“We’ve seen a real loss in the number of full-time newspaper reporters in the area,” Duffy said. “Our concern was that the type of accountability journalism that we’d relied on newspapers for wasn’t being done. We saw a hole there that we could fill and heard from listeners that we could do this type of work.”

Graham was senior editor of the nationally distributed news service Environment Report, which Michigan Radio scaled back to a local, twice-weekly news segment as part of a strategic realignment of the newsroom. All three members of the team were given other newsroom jobs; Graham was charged with creating an investigations unit. For now, that means he has the help of an intern.

“The biggest difference between Lester’s job and that of other reporters is that he doesn’t have to do daily spots,” Duffy said. “His job is to work to get the next feature done.”

Productivity is not a problem. “Lester has a really strong work ethic, so we don’t worry about him wasting his time,” Duffy said.

Graham produces a mix of traditional investigative reports, accountability pieces and explanatory journalism under the banner Michigan Watch. His recent reports about exorbitant fees charged by the Michigan State Police for Freedom of Information Act requests and individual state legislators benefiting from changes in the way the state taxes small businesses have “gotten traction,” Duffy said.

Bloggers and smaller newspapers are picking up on the Michigan Watch reporting, and the stories generate a big buzz via social media, according to Tamar Charney, p.d. “Having Michigan Watch has raised our stature somewhat,” she said. It’s also irritated policy makers whose decisions have come under scrutiny.

So far, editorial collaborations have been informal. ProPublica’s investigation of horizontal fracking, a process for extracting natural gas from shale, powered a series of Michigan Watch reports last fall, and Graham has used research from the Center for Michigan, an Ann Arbor-based think tank, in some reporting, Duffy said. “Collaborations are something we want to build out.”

Charney wants to add a computer-assisted reporting specialist to the investigative team, but any such expansion won’t happen until there’s more funding or an editorial partner. “It’s been a year, and we’ve been very successful with one very driven reporter,” Charney said. “That shows it’s not out of the reach of public radio to make a difference in this area; it’s a question of priorities.”

What do statehouses, city halls do about corruption? PRI and integrity newsrooms plan survey of state and local governments, February 2011

Kenny Malone of WLRN and Michael Sallah of the Miami Herald described the findings of “Neglected to Death” on NPR’s Talk of the Nation May 12.

“Inside the Puget Sound Partnership,” reported by KUOW investigative reporter John Ryan, uncovered problems with misspending of state funds and nepotism within the agency charged with restoring the health of the Sound.

“Neglected to Death,” produced by WLRN-FM and the Miami Herald, was built upon computer-assisted reporting: At its core was a database that expanded upon incomplete and missing records from the Florida Agency for Health Care Administration. The Herald reported how the team broke the story. Its multimedia reporting package is here. NPR ran a 7-minute report on the drowning death of Aurora Navas, an 85-year-old Alzheimer’s Disease patient.