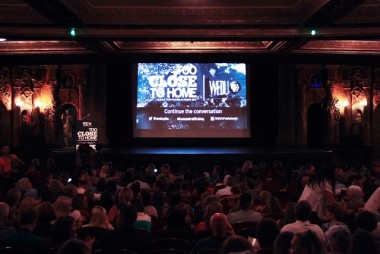 Tampa Theatre, full house with 200+ on waiting list to attend at the preview screening of Too Close To Home. (Image: WEDU)

Tampa’s WEDU has built an outreach campaign around its latest local TV production — a documentary examining human trafficking within the community.

Too Close to Home, which was previewed to a packed theater before its Sept. 26 broadcast debut, reports personal stories behind a troubling trend in the Sunshine State: Florida has become a huge destination state for human trafficking, ranking third in the nation.

Community members are largely unaware of the problem and its proximity to their homes, said Kristine Kelly, producer and WEDU content services manager.

“I think that the mission of public media and WEDU is . . . to get these kinds of stories out there and to increase social awareness and hopefully help prevent [human trafficking] in the future,” Kelly said.

The 30-minute documentary was produced in collaboration with the Allegany Franciscan Ministries, a frequent partner with WEDU on community-service campaigns, and the Junior League of Tampa. Human trafficking has become such a problem locally that the ministry has placed efforts to reduce it at the top of its agenda. A form of modern-day slavery, trafficking extends beyond the sex trade and ensnares domestic workers.

For the film, Kelly interviewed three female survivors of sex trafficking and representatives of several organizations that work with victims, including Redefining Refuge, the Florida Coalition Against Human Trafficking and the Clearwater/Tampa Bay Area Task Force on Human Trafficking. The survivors “have gone through hell, and they have really emerged strong on the other side,” Kelly said.

During a Sept. 12 preview screening at the historic Tampa Theatre, WEDU distributed silicon wristbands printed with the number of a hotline that handles reports of human trafficking. The bands also included the address for a WEDU website providing resources for survivors.

To build more awareness of the issue post-broadcast, Kelly is producing a PSA campaign that will air through next year. She also plans to bring the campaign to schools to raise students’ awareness about traffickers’ tactics.

Kelly hopes to continue reporting on trafficking by investigating the sources that create demand for human trafficking.

One thought on “WEDU debuts doc on troubling local issue that few see in their midst: human trafficking”