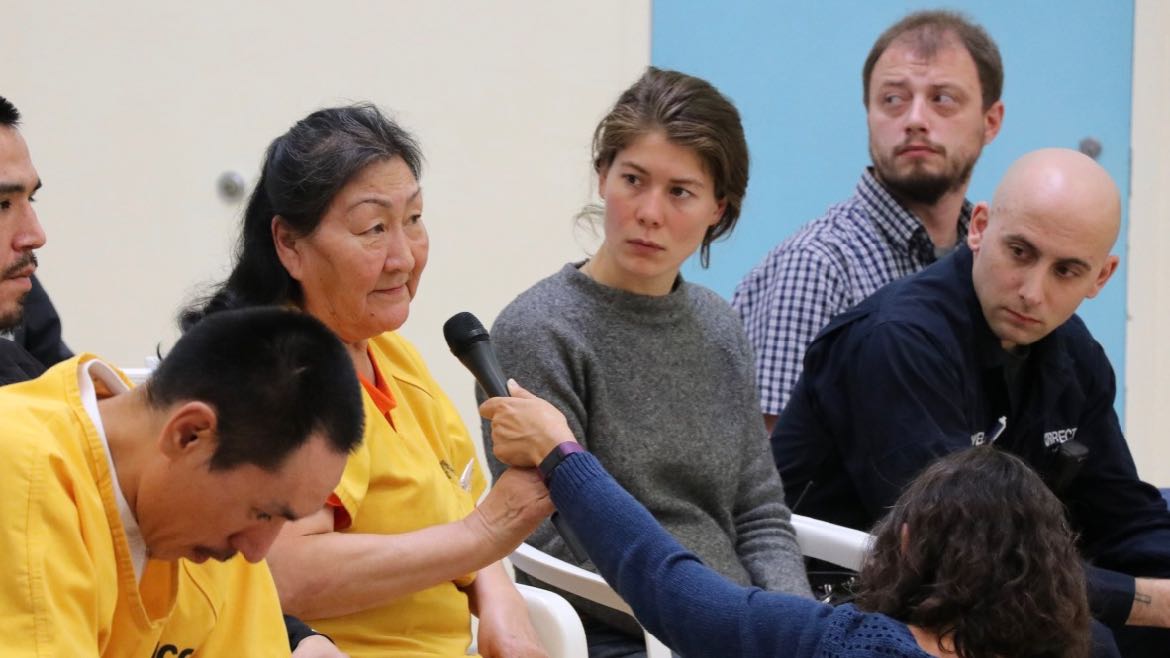 Community in Unity events began in December 2015 as televised panel discussions with stories and questions from the audience. Topics ranged from prisoner re-entry to foster care and gender identity. On average, 25 to 50 people showed up for each event. After the first season, the program evolved into a conversation series where people sat together in a circle without official “experts” and shared their thoughts on topics like race and identity, mental health, and pathways in and out of homelessness. The events were recorded for radio and moved out of the Alaska Public Media studios into public spaces, such as community centers and emergency homeless shelters.

Each community conversation starts with a set of agreements asking participants to actively listen to each other with respect, to seek understanding, and to accept that the conversation may bring up issues that won’t be resolved. The moderator guides the conversation, which is recorded for radio broadcast, and asks questions to help keep it going. Rather than standing in front of people or trying to be the center of attention, the moderator kneels or sits, encouraging participants to speak directly to each other as much as they feel comfortable. Each event is followed by refreshments and a chance for people to connect one-on-one.

At the invitation of a community group in Unalaska, Alaska, an event focusing on immigration was hosted in the remote fishing town in the Aleutian Islands with a large immigrant population. A parallel event was held with high schoolers who reflected on growing up in such a diverse and accepting place. Another event, co-produced in Anchorage with Out North Contemporary Art House and Radio, reverted to the panel conversation-style, but was hosted by a youth moderator and featured a panel of young people talking about how they are perceived in the community and what types of change they would like to see and drive.

In September 2017, Alaska Public Media partnered with the Alaska Department of Corrections (DOC) and took Community in Unity inside of the state’s only maximum-security prison, Spring Creek Correctional Center in Seward, Alaska. For the first time, residents of the small coastal town were invited inside the prison to sit with inmates and learn about life behind the walls. It was a chance for the 11 inmates who volunteered to talk about their restorative justice initiative and to find out how they could contribute to the community, even while still incarcerated. The conversation also included prison staff and former Spring Creek inmates.

After the success of Community in Unity: Spring Creek, DOC officials invited Alaska Public Media to host similar conversations at prisons around the state, including in remote communities in rural Alaska.

In late June, APM hosted a discussion about addiction and recovery at the state’s largest prison, Goose Creek Correctional Center in Wasilla. Though the turnout was smaller, more people engaged in longer, one-on-one conversations about paths to recovery. Thanks to a small grant, we were able to provide food both in order to make the environment more inviting. People ate together as they would outside of a prison, further breaking down barriers. Inmates said eating food like peppers and cherries — things they are normally not allowed — made them feel like real people.

The goal of the program is to reduce stigmas that create barriers for community integration and to increase understanding between disparate communities by creating a space for safe, respectful face-to-face interactions.

Read about Community In Unity in Current.