Sahan Journal, an independent, nonprofit news site in partnership with MPR News, serves the immigrant and refugee populations of Minnesota with professional journalism centered on immigrant lives, voices, and experiences. It has been publishing essential pandemic coverage in Hmong, Somali, and Spanish, in order to be accessible to the three largest immigrant groups in the state.

“Framed by WDET” is a multimedia series that integrates photography and audio storytelling to present the story of Detroit’s ethnic and cultural communities on the radio, online, in a photobook, and at pop-up exhibitions in more than 20 art spaces in the Detroit region and beyond. It explores the moments and spaces that Detroiters share with one another through the work of 18 Detroit-based photographers and audio producers.

Community in Unity is a solutions journalism project and event series from Alaska Public Media to begin critical and thoughtful dialogue between different people. APM works with community partners to invite people inside homeless shelters, community centers, prisons, and TV studios for recorded conversations about topics that are affecting them. Topics have ranged from race and identity to mental health, immigration, and incarceration.

Ode is a bimonthly live storytelling event from KWIT-KOJI Siouxland Public Media, of which Stories Without Borders was one installment. For this particular evening, the station teamed up with two other nonprofit organizations: the Mary Treglia Community House, whose mission is to help immigrants living in the community, and the Sioux City Art Center. Six storytellers stood before a live audience to tell their stories of leaving one home for another. 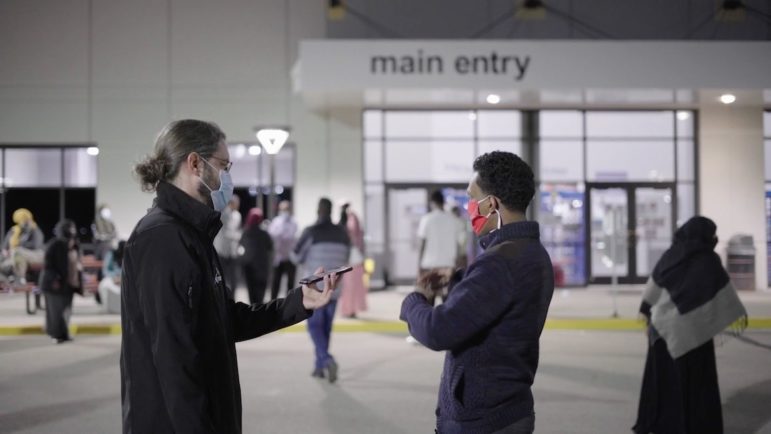 Sahan Journal’s founder, Mukhtar Ibrahim, is a Somali-born American journalist who began this digital-first independent news operation with the support of MPR News. Over the course of 18 months, Ibrahim raised $900,000 in funding from major foundations, created sahanjournal.com, and hired seven staff members, including three Report for America journalists. The site launched in August 2019, and has exceeded growth projections. In July 2020, unique visitors totaled nearly 200,000.

At the onset of COVID-19 in Minnesota, Sahan Journal began publishing essential pandemic coverage in three languages — Hmong, Somali, and Spanish — reflecting the three largest immigrant groups in the state. Over the summer of 2020, as the Twin Cities were rocked by civic unrest in protest of the killing of George Floyd by Minneapolis police, Sahan Journal offered a distinct perspective on the social change underway by providing insight about new coalitions and the activism of immigrants and refugees in support of BLM.

Over its first year, Sahan Journal has worked to prove the concept that newsrooms led by BIPOC journalists will create a new kind of journalism and draw in young readers.

The vast majority of our readers are under the age of 40, and 85 percent of our traffic is from mobile users. Young immigrants and other people of color are engaging with the news offered at Sahan Journal because it meets them where they live. They are a diverse, sophisticated, and globally-conscious group.

While our mission is to serve the immigrant and refugee communities of Minnesota, we are aware that our coverage travels great distances online. Immigrants, refugees, and other BIPOC communities have not received coverage commensurate with their contributions to the state. We believe stories that represent young immigrants and other people of color as participants in civic life affirm the possibilities of democracy.

Over 18 months, from January 2019 to August 2020, Sahan Journal raised $900,000 in philanthropic donations, mostly from institutional funders. We are currently building out our individual donor and underwriting programs.