Local that Works spotlights innovative and replicable content, engagement and revenue initiatives at public radio and TV stations and nonprofit news organizations in the U.S. LTW includes an annual contest and a database (below). LTW produces webinars that offer insights into projects and organizations that are reshaping local journalism.

Explore the database of 400+ Local that Works projects. To see previous Local that Works contest winners, finalists and semifinalists, click on green, purple or orange tags and our judges’ favorites will show up in the left column.

You can filter your results by selecting a tag or multiple tags in the categories drop down menu and clicking on search. IMPORTANT: If you want to change, broaden or narrow the results, make sure to uncheck categories for subsequent searches.

Resettled is a six-part podcast series that explores the complex resettlement process through the perspectives of refugees. The podcast team included two former journalists from Afghanistan and a poet and social entrepreneur from Iraq who had experienced resettlement themselves and offered valuable insight. Working with local nonprofits, VPM held a series of storytelling workshops in the community and recorded at booths during international festivals around the state.

Uncuffed is a podcast and radio series made by people incarcerated in California prisons. KALW producers teach them how to record and edit powerful audio stories about life on the inside. Uncuffed seeks to create emotional, human stories to shift the narrative around incarcerated people and change the criminal justice system.

Sahan Journal, an independent, nonprofit news site in partnership with MPR News, serves the immigrant and refugee populations of Minnesota with professional journalism centered on immigrant lives, voices, and experiences.

Grace Weber’s Music Lab (GWML) is a free monthly music education program and talent accelerator for Milwaukee area high schoolers, providing opportunities to refine performance skills; build connections between engaged and talented young people; expose participants to the multiple career opportunities available in creative industries; and to participate in performances and talks by professional musicians, entertainment industry professionals and artists. This program is critical to meeting the growing and changing needs of our city and youth – Grace Weber’s Music Lab reaches kids with art forms that are increasingly relevant and central to their lives, including diverse music from hip-hop to alternative to spoken word.

In partnership with Fresno Unified School District, the 3rd largest in the state of California and a district with 90% economically disadvantaged and diverse students living below the poverty line without equal access to online learning, Valley PBS created an on-air program from 8am – 9am each day that targets Literacy Lessons for K, 1st, 2nd and 3rd graders and is taught by FUSD teachers. Students have been able to learn and review fundamentals over-the-air, streaming on Facebook Live daily and on the website since June and lessons are translated into Spanish and Hmong as well; the program has just been extended until December 18th and expanded to include Pre-K and T-K lessons.

The Time of Our Life

Valley Public Radio launches a new broadcast series and podcast dedicated to rediscovering the short stories of Pulitzer Prize winning author and Fresno native William Saroyan. The program features acclaimed authors reading the works and discussing their relevance to our lives in the COVID-19 era.

Get Lit with All Of It

“Get Lit with All Of It” is a virtual book club in partnership with the New York Public Library (NYPL) that has become a source of culture, connection and community for New Yorkers even as we remain apart. Participants access each month’s book for free using the NYPL app (with thousands of extra e-copies made available for a free 3-week download) and each month, Alison Stewart hosts a livestream book club event with the featured author, special musical guests and experts who put the themes of the books in a cultural context. “Get Lit” has helped “All of It” reach a larger audience than ever before, and of the top 10 checkouts from the NYPL from March-August 2020, three are are “Get Lit” books.

Can We Talk? A Community Conversation About Race

Can We Talk? is an honest conversation about race in the Tampa Bay region, exploring topics from the local Black Lives Matter movement to public health, white allyship to social reform. Community members open up, debate, and share perspectives on issues that often divide us, creating an opportunity to listen, understand one another, and learn ways to make meaningful change in our community.

Student Voices elevated the voices of young people at a critical moment in America, as we grapple with racism and the devastating effects of the coronavirus on education. Chalkbeat, whose mission is focused on educational equity, told student stories in creative ways and convened virtual gatherings to uplift their insights so people in power can make more informed decisions. 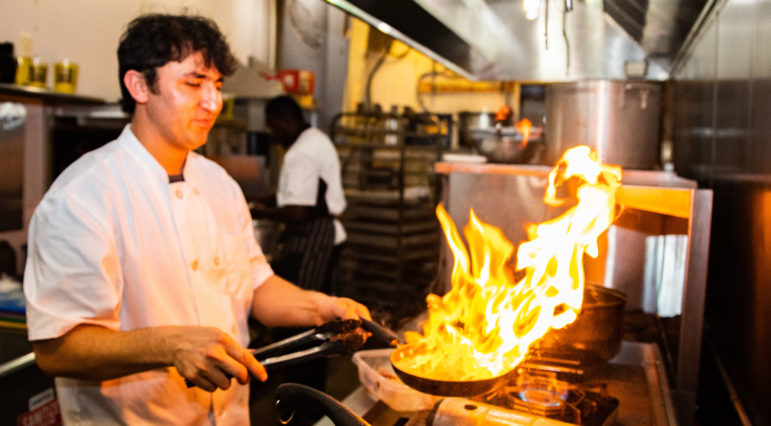 A staff person at a resettlement agency recounted how after the 2016 Presidential election, the steady flow of new refugees slowed to a trickle. The stories of refugees needed to be told. VPM decided to launch a podcast with a new model that included the community in every step of the process in order to create a powerful and meaningful product. To do this, VPM needed to establish authentic relationships where everyone feels invested.

To get started, we hired as project advisors two former journalists who had recently resettled in Virginia. Zarmina Wahidi and Nazir Afzali brought with them their rich experience working in Afghanistan as reporters, fixers and translators. When Zarmina stepped into our studio, she shared memories of being the first woman in her family to have a professional job. In the last episode of Resettled, she provided the voice-over for a mother who shared her excitement about the freedom of owning her own car.

We sought out poet and social entrepreneur Ahmed Badr, who resettled from Iraq, to be our host and producer. Along with building relationships with individuals, we connected with nonprofits like ReEstablish Richmond and the Peer Leader Group at Harrisonburg High School. Together, we organized two storytelling workshops: one for adults, the other for high school students. We also recorded stories on-site at the Festival of Cultures in Charlottesville, Harrisonburg International Festival, and World Refugee Day in Richmond.

Through active community-building, we learned from refugees about the issues they face and the complexities of the resettlement process. We built trust within a community we rarely accessed before this project.

The series launched in July 2020 and was met with high-acclaim from immigrant- and minority-led podcasts like Kerning Cultures, Immigrantly, and Subtitle. Along with promotional plugs, thoughtful reviews like this one from Subtitle reinforced our original intent:

“Listening to Resettled is like flipping the lens on America. All of the absurd contradictions come into focus. And it is the refugees asking the questions; they seem like the sensible ones. They are humanized here, quite the counterweight to how they have been portrayed by some in the corridors of power.”

By including the impacted community in the process, we provided a platform and created a replicable approach to share stories in a way that matter to both immigrants and the community at large. Since the podcast launched, it was downloaded over 45K times, reached 50K people on social media, was featured on Apple Podcasts, and tweeted about by the U.S. division of the UNHCR.

More importantly, though, is the feedback we received from those involved in the project. Fatimah, one young workshop participant, said the project inspired her to join the university newspaper. A former intern is now working full-time for ReEstablish Richmond. And Dadi Neopaney, a refugee from Bhutan, sent me a text message after listening to the Jobs episode: "Cried, what a great podcast. I cried, too. THIS is impact."

The project was awarded $65,000 by the Virginia Foundation for Public Media. During the production, a donor contributed $1,000.