MISSING THEM is a collaborative journalism and community project to identify every New Yorker who died due to COVID-19 and write a story about them. The goal: to bring equity and inclusion in memorials.

COVID Between the Coasts

WNIN-FM and the University of Evansville

We have created an infrastructure and communication system that allows more than 20 media, educational and community organizations to share and co-produce news for a statewide audiences.

Over 10 weeks, students gained an understanding of the fundamentals of podcasting, production skills and marketing tips, and they walked away with a resource list for the future. WFAE believes in the power of podcasting to amplify diverse voices, remove barriers to storytelling and to build and connect communities.

Kansas City PBS creates “Zoom juries” as a novel approach to engaging citizens on critical pandemic related issues. In ‘Justice Deferred’ we partnered with area courts to examine what it will take to restart criminal jury trials suspended since stay-at-home orders went into effect in March.

Sahan Journal, an independent, nonprofit news site in partnership with MPR News, serves the immigrant and refugee populations of Minnesota with professional journalism centered on immigrant lives, voices, and experiences. It has been publishing essential pandemic coverage in Hmong, Somali, and Spanish, in order to be accessible to the three largest immigrant groups in the state.

Be My Neighbor Week

Prior to the pandemic, WFYI had set up a Be My Neighbor Day event at the city library with several community partners, a sensory-friendly area and an expected 1,200 guests. COVID-19 forced us to cancel the live event, so we pivoted to a mix of educational outreach and volunteer engagement for a Be My Neighbor Week. 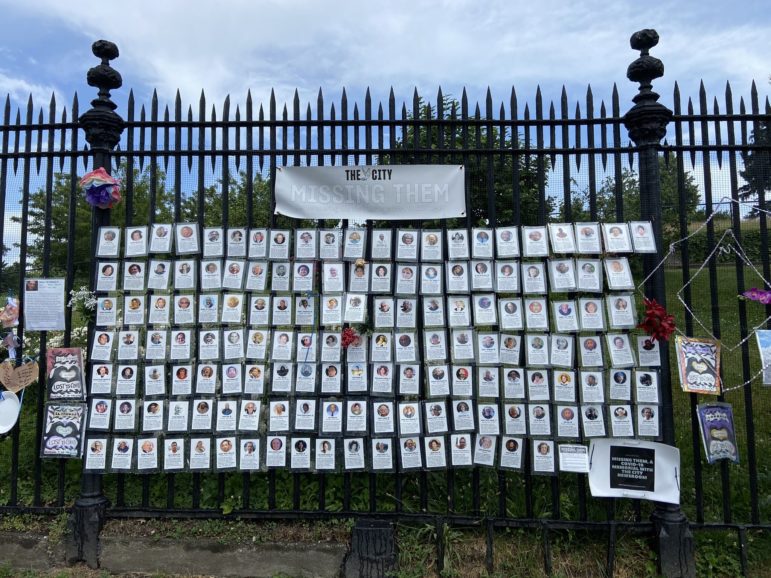 As COVID-19 deaths increased in New York City in spring 2020, we began collecting names and stories of people who died from local obituaries, Legacy.com and unions. Our early analysis showed that the public obituaries skewed white, male and toward the wealthier enclaves of the city. Yet, COVID-19 was killing Black and Latino New Yorkers at twice the rate of white residents. People of color, including immigrants living in the Bronx, Queens and Brooklyn, were rarely reflected in the obituary pages.

To address this gap, we initiated an extensive community engagement campaign asking folks to share stories of those they lost through text, email, voicemail and a Google form. To date, we’ve heard from more than 1,000 people who lost someone. The project has evolved into a living memorial of more than 2,500 people who died — all vetted with public records, searchable, filterable and grouped by occupation — and with nearly 500 obituaries written free of charge.

While traditional obituaries in local media are about 70% white, MISSING THEM’s community submissions, fueled by our engagement effort, more closely mirror the demographics of those who died.

From tips and community conversations, we’ve published more than 20 accountability stories, including investigations of deaths in city jails and nursing homes.

THE CITY also held a three-day online event in December 2020 to remember and celebrate the lives of those lost. The event included hundreds of family members along with social service providers and advocates. They shared stories, sang songs, and took part in writing and poetry workshops. This event led to a new live online play based on MISSING THEM’s obituaries produced by The Working Theater, an award-winning Off-Broadway theater company.

MISSING THEM is in collaboration with Columbia Journalism School, the Craig Newmark Graduate School of Journalism at CUNY and Boston College. Since summer 2020, students and graduate fellows have worked on the project daily. We’ve also trained more than 30 volunteers to help research, interview and write obituaries.

MISSING THEM is the most comprehensive memorial of New Yorkers who died due to COVID-19. Recognizing this, the City of New York reached out to partner with us for the citywide “Day of Remembrance” ceremony. Images of those in our memorial were projected onto the Brooklyn Bridge as part of a ceremony marking the anniversary of the first COVID-19 death in New York.

Through tips and conversations with family members of those who died, we’ve published more than 20 local accountability stories with partners like Type Investigations, NPR, Vox and the Stabile Center for Investigative Journalism at Columbia Journalism School. These stories produced responses and calls for hearings from elected officials.

Students from the Stabile Center found that 1 in 10 New Yorkers who died of COVID-19 were buried on Hart Island, New York’s potter's field. Another Stabile project on the true toll of COVID-19 in city jails prompted Mayor Bill de Blasio to call for an investigation. A Columbia Journalism Investigations fellow reported on the use of experimental drugs like hydroxychloroquine in nursing homes — a story that began after we heard from a grieving daughter who said: “I’m not happy with how they treated my dad.” Following our report Sen. Leroy Comrie, a Democratic state senator from Queens, called on the legislature to hold special hearings on the St. Albans home. “We have to restore trust and integrity in our nursing homes,” Comrie told THE CITY in a statement. “For healing to occur, it is necessary for the legislature to hold hearings on these matters.”

From a community perspective, families who participated told us that this was the only place they felt existed to talk about and share stories of not just their loved one but their grief they were feeling. Some participants of the project went on to start online grief circles and support groups.

Recognizing that many New Yorkers were looking for ways to honor those lost to COVID-19, THE CITY held a 11-day campaign to raise funds to support MISSING THEM in May 2021. We raised $6,909; those who contributed also became members of THE CITY. We also teamed with the Off-Broadway Working Theater on a live online theater event based on the obituaries we published. A portion of the proceeds — $800 — was donated to THE CITY to support MISSING THEM.