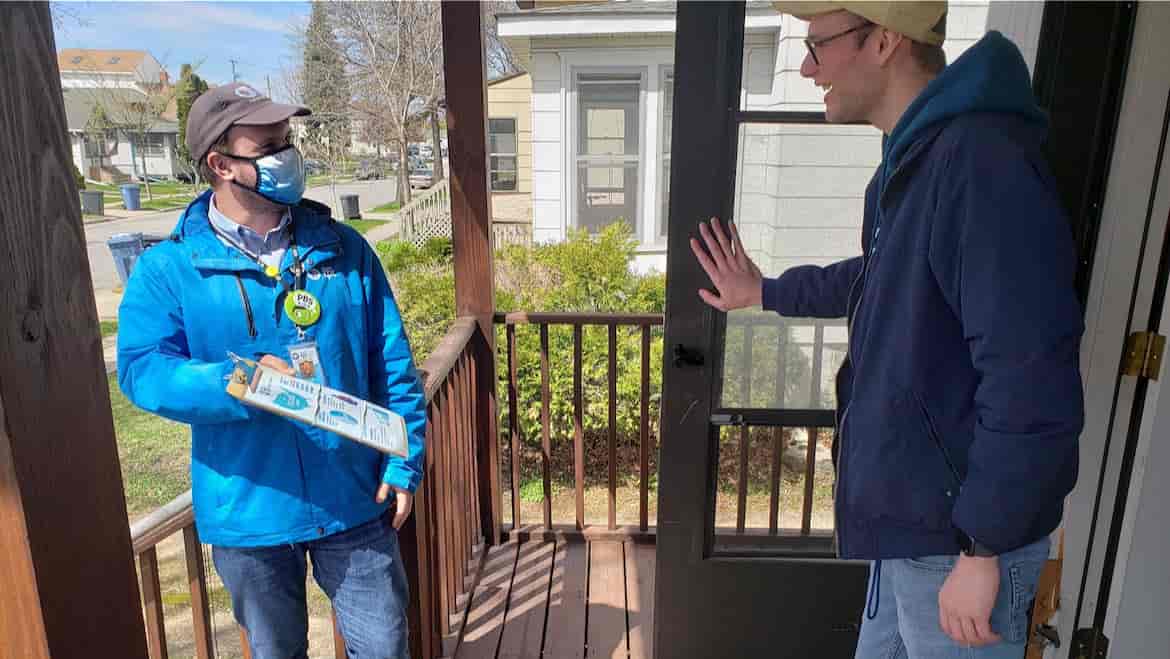 Public media stations have relaunched door-to-door canvassing this spring with the easing of pandemic restrictions, and results so far have exceeded their expectations.

Revenue collected per shift has jumped 21% and the number of conversations canvassers have had with residents has increased 19%, based on data from four stations that restarted their programs, Heiplik said.

“Everyone is home now because they aren’t driving to and from work,” Heiplik said. “They’re giving more money, and more are becoming sustainers. It’s like a story of more, more and more. It’s phenomenal to see that.”

Residents greeting canvassers at their doors seem to welcome them, and in Pittsburgh, one homeowner even invited WQED canvassers for dinner or dessert. The canvassers, who are adhering to COVID guidelines, politely refused.

“That’s just an indication that people trust WQED and they trust the intention,” said Lilli Mosco, VP of development and membership at WQED. “People really miss the station, but people also really miss the human interaction.”

Before the pandemic, 14 stations were using canvassing as part of their fundraising strategies. Door-to-door solicitation reaches donors who are younger than the average public television contributor; the average age of a canvassing donor is 51, compared to 65 for those who pledge during telethons, Heiplik said.

“A younger person may be more willing to engage with someone at the door,” said David Preston, VP for membership at TPT in St. Paul, Minn. “We also know the canvassers are very good at selling the family membership that we have, which has benefits for families with kids.”

Stations have been eager to relaunch canvassing because of its success in attracting sustainers, who have a higher lifetime value than other contributors. About 70% of revenue generated from canvassing comes from sustainers, Heiplik said.

“Our number one source of new sustainers is canvassing,” Mosco said. “We could see before we started canvassing that acquiring sustainers was an important program for contributors and we recognized that canvassing would only add to that exponentially, and it has.”

Boston’s GBH acquires more sustainers from TV and radio pledge drives than from canvassing. Yet sustainers who are recruited at their doorsteps tend to remain contributors for longer periods of time, said Jack Callahan, managing director of membership.

“Sustainers who are acquired by canvassing are most loyal and stay with us,” he said. “Their lifetime value is very important, and that’s why canvassing is so important.”

TPT has also found canvassing to be a major acquisition tool for sustainers. “We know that our sustaining members — they retain at a very high level, up in the 90% range,” Preston said. “One-time annual gifts don’t renew at all. It’s really finding the sustainers who are going to stay on the file for a long time — that’s the goal we had.”

Door-to-door canvassing at all stations was halted in March 2020 when the pandemic forced much of the country into lockdown. The program had been managed by Donor Development Strategies, a partner of CDP that stations contract with to train and hire the canvassers.

“There was no way of knocking on people’s doors and having a conversation at that time, so we had to stop operations pretty quickly,” Heiplik said. “We thought we were stopping for two weeks or five weeks or a month, and then it became clear that we had to shut down for a much longer period of time.”

The first station to relaunch canvassing was WQED, which restarted the program in September. But the effort was canceled in November because of the increasing number of cases of COVID-19 in the Pittsburgh area.

The station relaunched again in April, as vaccination rates were increasing and COVID cases were declining. Since then, canvassers have been generating an 89% increase in revenue per shift and acquiring 78% more sustainers per shift, Mosco said.

“All the metrics have been spiking,” Mosco said. “I think that has to do with people using our services more because they’ve been sequestered in their homes because they haven’t been able to go out, so they’re listening to us more.”

TPT restarted its canvassing program in March and has had a positive response. Canvassers are signing up 3.2 donors per shift, compared to 2.5 new donors per shift two years ago. Overall, one in seven residents greeted by a canvasser is making a contribution.

Stations that resumed canvassing began by testing how people reacted when they saw representatives of their local public media station at the door. Canvassers wore masks, maintained social distancing and had their temperatures checked before hitting the street.

“We felt confident that it was worth trying, but we were concerned in the beginning,” said Callahan, adding that canvassing resumed at GBH in December. “We monitored feedback every night. We were stunned. There were people who said, ‘I don’t feel comfortable talking during a pandemic,’ but there were few who said that.”

TPT restarted canvassing in March with three directors going door-to-door to test public reaction. Since there were no complaints, the station has increased its canvassing staff to 10 and expects to double that by the summer, Preston said.

WQED also began with a soft relaunch with only four canvassers, compared to having 10 per day before COVID. As restrictions loosen up, Mosco expects that the staff will bounce back to 10 by summer, which will allow the canvassers to reach residents in suburbs farther from Pittsburgh.

GBH, which has a canvassing staff of 14, also hopes to reach people who live farther from Boston as COVID restrictions wind down. Yet Callahan cautioned that the station will be monitoring the impact of the virus to determine whether to continue the program. “It’s just like we’re doing in our own lives — we’re constantly reevaluating it,” he said.

Heiplik said that he hopes canvassing will resume at all 14 of the stations that were using the program before the pandemic. He also expects new stations to start canvassing because of the successful results it has shown this spring.

Since canvassing was first launched in 2011 in Denver, the program has raised over $31 million for stations that have participated, Heiplik said. The effort has recruited 420,000 donors, including 130,000 sustainers.

Mosco said canvassing is a sizable investment for public media stations, but the outcome makes it worthwhile. “It has been an extremely rewarding project not only for WQED but for the people who spoke to the canvassers,” she said. “They felt really good about making their gift, and we felt really good about having them as members, so it works out very well.”