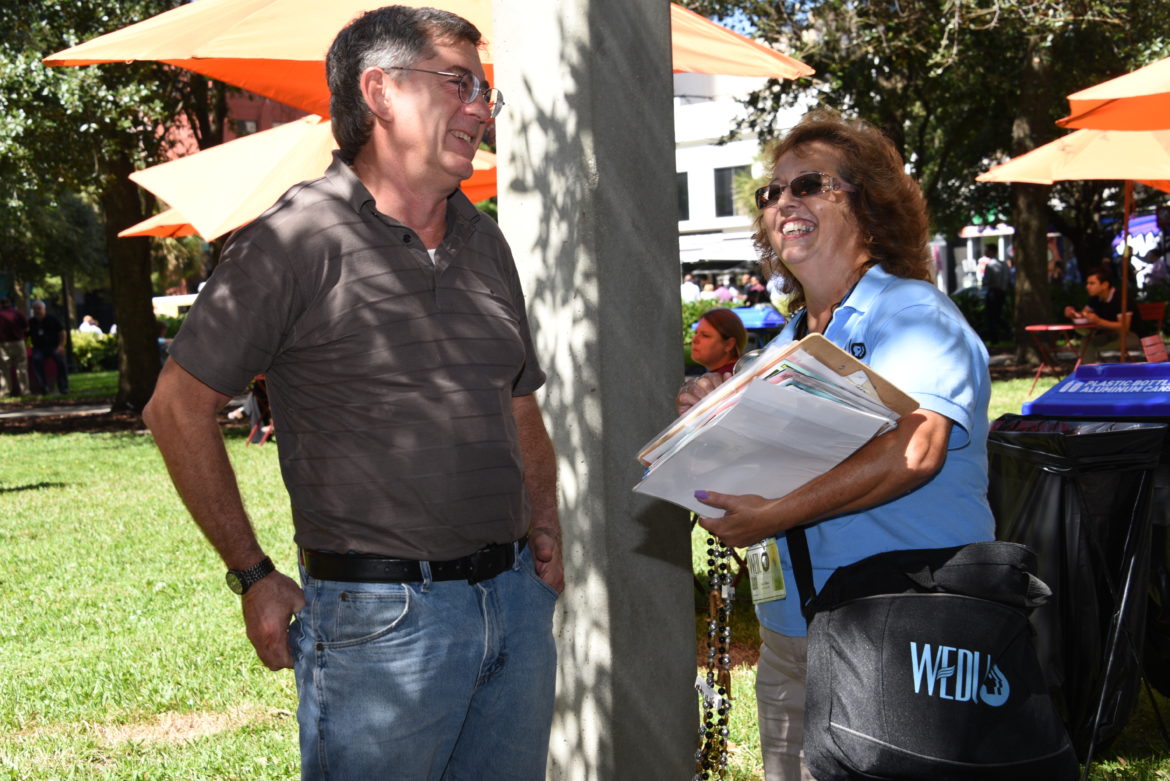 A WEDU canvasser works to sign up donors at an October 2015 event promoting the PBS Arts Fall Festival in downtown Tampa.

Door-to-door canvassing has raised nearly $14.5 million for public media since a Colorado TV station first tried the technique five years ago, and experts say more broadcasters are trying it.

Twenty stations have attempted canvassing since Rocky Mountain PBS pioneered it in 2011. Fourteen now have canvassers knocking on doors, including a public radio station.

To date, canvassing has signed up 220,000 new donors, according to Michal Heiplik, executive director of the Contributor Development Partnership. “That’s the equivalent to creating one new station,” said Heiplik, whose organization helps stations with canvassing.

According to CDP, canvassing reaches donors 10 years younger than the average public TV contributor, who tends to be between 60 and 65. Roughly a third of new donors gained from canvassing become sustainers.

“Everyone wondered whether this was going to work for radio like it does for TV because we don’t have Elmo or Big Bird.”

Over the past five years, data collection and research have become more sophisticated. Canvassers use a mobile app that gives them information about potential donors, such as whether the person answering the door is an active or lapsed member.

But canvassing is expensive, typically requiring a minimum $350,000 investment for a year. CDP encourages stations to consider it a five-year commitment. CDP and Donor Development Strategies, a Denver-based company that stations contract with to manage the program, are working together to customize canvassing to make it more accessible for stations with smaller budgets.

DDS and CDP provide tools and strategies for stations to target neighborhoods where they’re likely to find donors. On any given day, a canvasser walks by about 120 houses and has 40 conversations. They typically get three or four donations, one from a sustainer.

Armed with data and insight

Sue Udry says her block of nearly identical 1950s homes in suburban Silver Spring, Md., gets canvassers fairly often, but they typically represent political groups. When she heard a knock at the door last spring, “I knew it was a solicitor, and I was not excited,” said Udry, the executive director of a civil liberties organization.

The affable 20-something man was canvassing for WETA in Washington, D.C., and would only accept monthly EFT memberships. Udry said she committed to $5, the minimum amount, “just because I used to be a canvasser and I’ve got nothing against public television. It really had nothing to do with WETA.”

WETA began canvassing in November 2015 and is still in the pilot phase, according to Jeff Regen, v.p. of development. The station targets neighborhoods “fairly carefully based on what we consider attractive areas,” Regen said. WETA declined to comment on the program’s performance or to allow a reporter to accompany canvassers on their rounds.

“You can get any kind of reaction, but it’s about how you approach the door.”

DDS draws on a wealth of data and insight to determine where to deploy canvassers, Heiplik said. It assesses ZIP codes based on factors such as existing active donors, incomes, age, distance between homes, and how receptive residents have been to canvassers. Canvassers don’t tend to do well in apartment complexes and condominiums, for example.

“You’re looking for, not necessarily the most affluent neighborhoods, but those that have slightly higher income, but the right composition, the right solicitation laws,” Heiplik said. “All of those things go into that mix.”

DDS buys addresses from vendors and receives monthly information from stations about members in the ZIP codes canvassers are targeting. DDS then overlays the member data with the addresses, said Louise Stephens, DDS client relations manager.

The app used by canvassing teams provides a profile of the neighborhood and residents. “We’re at the point where we’re going into places for the second time,” Stephens said. DDS is able to see whether particular streets and neighborhoods are becoming more or less supportive of canvassers’ efforts, she said.

Canvassers are trained to deliver targeted messages and to respond to clues, such as a child’s bicycle sitting in the lawn. The personal interaction enables canvassers to make a solicitation pitch around kids programming, which works better at the door than through other fundraising channels, Heiplik said.

Canvassers also feed the app. They ask people what services they enjoy — TV, radio or both — and their favorite programs. They guess at age and ethnicity.

Canvassers also distinguish between different types of no’s, such as a supportive no, someone who won’t give at the door but is generally supportive of the station, or a hard no. Canvassers note how the interaction unfolds and might suggest, “Don’t ever go to that door again,” Stephens said.

Just told @WGBH canvasser I can't donate while David Koch remains on their board. He said he hears that a lot! #KochFreeWGBH @ForecastFacts

One canvasser got a mixed response while canvassing in Tampa, Fla. “I once knocked on the door of an ex-Marine with NRA stickers everywhere, and he was very angry,” said Justin Garcia, a DDS employee who now serves as canvass director with Tampa’s WEDU. To keep costs down, the station has hired local DDS staffers to serve as canvassers rather than contract with the company.

Garcia told his angry canvassee about The Telling Project, a one-hour documentary that WEDU helped produce about veterans coping with post-traumatic stress disorder. “I saw his mood change,” Garcia said. The veteran gave WEDU $20 and said, “I didn’t realize you did stuff like that. I thought you were all liberal hippies.”

Canvassers never know what kind of response they’ll get. “You can get any kind of reaction, but it’s about how you approach the door and the argument you make and if you can make it convincing,” Garcia said. When Garcia started canvassing, “I was nervous and just terrible at it,” he said.

While people may not give the first time they meet a canvasser, they may remember the interaction during the next pledge drive. “It’s not just an acquisition method, but another point of contact,” Stephens said.

Stations that use canvassing began as an “exclusive club,” Heiplik said. Budgeting required focus given the intricacies of the operation, and stations also need space to house canvassers, who become immersed in the culture of the station.

DDS finds canvassers through its website and nonprofit-oriented sites like Idealist.org. A station usually hosts 10 to 12 canvassers, and turnover is high as underperforming canvassers are let go. A June ad for canvassers for WETA advertised a hourly pay rate of $14 to $22.

CDP and DDS are now trying to find creative ways for stations with smaller budgets to participate. WGVU in Grand Rapids, Mich., is testing seasonal canvassing. And Wisconsin Public Radio recently became the first radio station to test canvassing. The station is separate from Wisconsin Public Television but tapped into the TV station’s canvassing office. DDS is careful to make sure that WPR and WPT aren’t targeting the same areas at the same time.

WPR eliminated a scheduled direct-mail appeal to pay for a canvassing effort from mid-April through June. It has sent out four canvassers a day, compared to WPT’s 20, said Susannah Michaels, WPR development specialist.

“Everyone wondered whether this was going to work for radio like it does for TV because we don’t have Elmo or Big Bird,” Michaels said.

The results were strong enough for WPR to continue this fiscal year. The station has hit the same goals as WPT, though it gets slightly fewer yeses at the door, which Michaels attributes to radio’s lack of visuals. “There’s this trade-off between the universality of TV, in terms of everyone grew up with it, and the passion public radio listeners feel for public radio,” she said.

Over the past five years, CDP and DDS have encouraged stations to target sustainers, which cost an average of $15 to acquire through canvassing. The average gift is about $150 spread over a year, with a retention rate in year two of 80–90 percent, Heiplik said.

Those sustainers are bringing about $700,000 each month into public media, according to Heiplik. “This is no small feat, especially when stations are facing declining donor counts and declining revenues,” he said.

The average gift from one-time donors acquired through canvassing is $30–$40, about what stations typically receive through direct mail. “They’re not great in terms of retention, but they help to pay for the program,” Heiplik said.