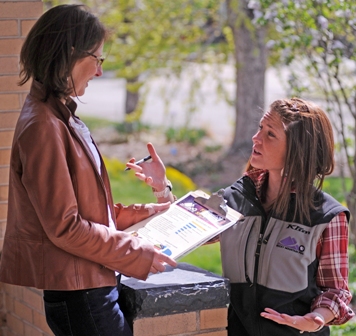 One of the most promising new membership initiatives to come along for public television in years doesn’t involve phone banks, on-air pitches or premium packages. It’s door-to-door canvassing, the grass-rootsy technique for talking up causes and soliciting donations face-to-face.

Rocky Mountain PBS in Denver has added a total of 11,157 new members since August 2011, when its canvassers began walking through neighborhoods and asking residents to join.

That work caught the attention of the Major Market Group’s best-practices initiative, Contributor Development Partnership, which initiated pilot tests at three additional stations this summer. Since then, WGBH in Boston, Arizona PBS in Phoenix and Twin Cities Public Television in St. Paul, Minn., have together scored more than 4,100 new donors through door-to-door interactions.

Securing donors through this pilot program has been a lot cheaper than the traditional direct-mail approach. While direct mail costs stations an average of $37 per donor nationally — with some spending as high as $70 — the cost of acquiring new members through canvassing is averaging around $10, according to Michal Heiplik, CDP project director. “These numbers are all very exciting,” he said.

Although the canvassing pilot has yet to demonstrate results on a broad scale, it shows promise in helping stations build their sustaining membership programs. About 30 percent those who joined TPT signed on as sustaining members, authorizing monthly contributions to the station on their credit cards; for RMPBS and the other test stations, the average is nearly 15 percent.

Lo Hartnett, a fundraiser with 40 years of experience in pubcasting, including a stint as WGBH development director, is impressed. “This is probably one of the most effective member acquisition tools I’ve seen since the Internet came along — and it’s much more effective than that,” she said.

Tim OLeary agrees. He is c.e.o. of Next Generation Fundraising (the development consultancy formerly operating as McPherson Associates), whose clients include the three pilot stations.

“This has the potential to be a game-changer, for sure,” OLeary said.

Louise Stephens, annual giving manager at Rocky Mountain PBS, had a hunch that soliciting memberships door-to-door might work in the Mile High City. The station had to experiment: “We were losing thousands of members each year” with traditional recruitment and retention methods, she said.

In August 2011 RMPBS signed its first contract for a test campaign of 480 canvass shifts over two and a half months. That work yielded 1,680 donors contributing an average gift of $45, beating the station’s initial projections for the strategy.

Canvassers have brought in more than 11,000 new members for Rocky Mountain PBS since August 2011. (Photo: RMPBS)

Now RMPBS deploys about a dozen canvassers each weekday from 3 to 8:30 p.m., and a few venture out on Saturdays as well. So far this fiscal year, an average of 230 new members are signing on each week.

“This is not just a job to do over the summer,” Clark said. “We hire professionals. They have full health benefits, as well as vacation and holiday pay. We’re starting 401(k) accounts at the beginning of the year. They feel like they have a home here.”

Stations pay DDS per canvassing shift. Workers receive a flat fee per shift as well as a small percentage of each donation.

At TPT, the crew of about 10 canvassers strategizes with station staffers every weekday afternoon. “We’re able to tell them what’s up,” said David Preston, TPT’s membership director, and craft scripts to reflect current station priorities.

In addition, stations can cull valuable information through the personal interactions of their canvassers: the ethnicity, age, gender and program interests of the members they meet. They’re even signing up volunteers.

All the canvassers “have real conversations at the door,” Heiplik said. “When you look at all the test markets, that’s 111,000 conversations. We are having one-on-one personal interactions with donors, very specific and targeted.”

The human touch especially appeals to Doug Eichten, president of Minneapolis-based DEI (Development Exchange Inc.), which offers fundraising services to public radio stations.  “That personal contact — I think that’s always a good thing,” he said. “I’ve asked folks to start thinking about a public radio version, at least as a test. Why not?”

A doorway to younger members?

CDP and stations have just begun to analyze data from the canvassing pilot, but another trend is starting to emerge: Door-to-door pitches appear to be attracting younger members.

Preston sees that in Minnesota, where family memberships are especially popular with canvassers. That option costs $10 a month and includes discounts for kid-oriented local activities. Of the 250 family memberships TPT gained over the past year, 110 were secured by canvassers in the past four months.

“That’s another key target,” Heiplik said, “trying to figure out how to get to that younger donor base and fundraise around kids’ shows.” Telemarketers can’t ascertain the age or lifestyle of a donor, but canvassers can — and they notice telltale signs like toys scattered in the front yard.

Overall, canvassing also appears to be more efficient than direct mail at securing donations. Across the pilot markets tested so far, around 12 percent of people whom canvassers talk with make contributions; that compares with a typical 0.8 percent response rate per 1,000 pieces of direct mail.

The size of individual contributions secured through door-to-door appeals varies. At TPT, “we’re coming in at a higher average gift rate than we expected,” Preston said, about $74, which is twice that of direct mail but about $40 less than the average pledge. In Denver, the average gift is around $56 for first-year canvass donors, compared with $75 for donors overall.

But the cash isn’t necessarily the point. “What my program lacks is acquisitions,” Preston said. “The more people who belong, the harder time we have finding new members. We needed to find a way to increase acquisitions that we felt would stick around. This is giving us in a very mature market a way to grow.”

The true test will be long-term sustainability, not only in donors but also in the canvassing effort itself.

Hartnett, who is consulting with RMPBS on the initiative, is keeping an eye on the growth of DDS as it takes on stations nationwide. “There will probably be some variance in how well-received canvassers are in different communities,” she said. “Maintaining the quality standards of the canvassers will be a challenge.”

Hartnett also is eager to see how canvassed members respond to membership renewals. “It’ll depend on how engaged they are during their member year,” she said.

DDS’s Clark remains optimistic that canvassing will realize its potential as an effective fundraising technique for public broadcasting because it’s built on personal, home-based interactions.

“Home is where they experience PBS and watch their favorite shows,” he said. “PBS has been around for 30, 40, 50 years in a lot of communities. It’s almost like they’ve been waiting for us to come.”

2 thoughts on “Winning members at their doors”