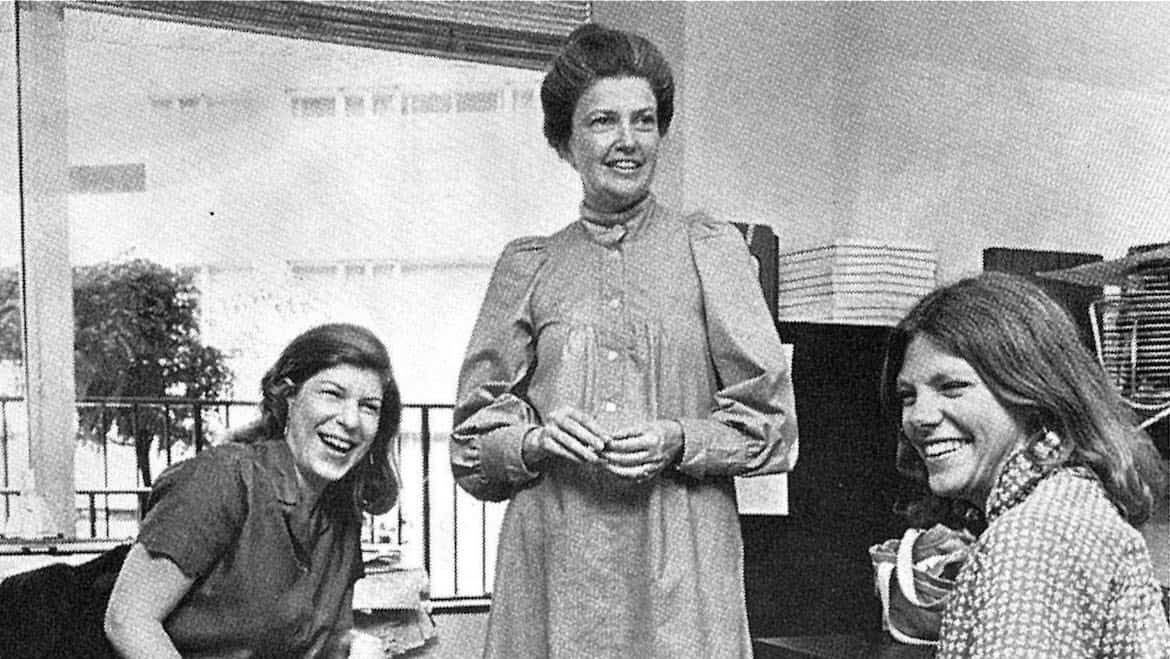 Susan Stamberg, Linda Wertheimer, Nina Totenberg, Cokie Roberts. Not only did these female journalists break glass ceilings, they made a lasting mark on NPR during the network’s formative years. In her latest book, Susan, Linda, Nina & Cokie: The Extraordinary Story of the Founding Mothers of NPR, Lisa Napoli follows the four women from their childhoods through their careers and trailblazing contributions to broadcasting and public radio journalism. In this excerpt, Napoli describes the influence that Roberts, Wertheimer and Totenberg wielded at the network in the late 1970s.

Because of the nature of their work and their obsession with the machinations of Washington, Cokie, Linda, and Nina forged a particular bond. Fortifying their might was their geographic proximity to one another at the office: They inhabited a cluster of desks situated near the front corner of the building. When they weren’t out chasing stories as star representatives of the growing network whose reputation they were helping to bolster, they were inserting themselves into its machinations.

Any staff member beckoned back to their area and asked to take a seat on their yellow ochre sofa knew that something was up — would they be reprimanded, praised, asked for a favor, or prodded for gossip? Sometimes, the founding mothers would play matchmaker. Other times, they’d scold. When they heard about a gentleman staffer who was planning on having a baby out of wedlock, Nina and Cokie marched over and expressed their displeasure. “Your children will be called bastards,” they cautioned.

Neither did they hold back regarding hiring and union matters and management issues. Nina, the screamer; Linda, the rational one; Cokie, ever tactful. They weren’t women in power — though, had they wished, they could likely have seized it — they were women of power. They preferred the loftier perches they inhabited; influencing from a distance, never hesitating to weigh in on their needs or concerns or opinions. They asked for what they wanted, and they got what they asked for.

If Cokie had to run to a parent-teacher conference, Linda, who did not have children, might cover for her. If Nina unearthed one of her famous scoops, she’d run it past the other two for their input. Together, they’d grouse about their personal lives. Cokie and Linda, hearing Nina working the phones, digging for sources, would marvel at her courage and tenacity. Nina and Cokie revered Linda for her persistence and attention to detail. And Linda envied Cokie’s even temper.

If the three of them were nowhere to be found, their editors (back when cell phones were but a fantasy) considered a few possibilities: They might be out in the field, reporting; or they might have sneaked off to Cokie’s house to can tomatoes; or perhaps they were out to lunch, gossiping with Frank [Mankiewicz, then NPR’s president] and a handful of others lucky to be asked to tag along. Frank would gleefully listen in to their chat — not girl talk, he emphasized, but “women’s language.”

Why, people would ask him, did he have so many women on the staff? Because, he’d say, “you get more bang for the buck with women.” The women groaned and, as they always had, kept working.

And networking — with a group of other Washington women who’d made inroads into journalism, they’d get together for an extension of their own personal “girls’ club” lunch each month; if anyone needed anything, like a job, they’d leap into action, working the phones to make it happen. Their very presence on the scene was changing everything, and they believed it to be their responsibility to speak up.

“Nobody reported on the widespread philandering of President Kennedy,” observed Nina of the not-very-long-ago era of underrepresentation. “Some of us at this table might think that that’s because there were virtually no women on the campaign plane.”

The force field increasingly extended well beyond their jobs and office politics and into their personal lives. When, in 1979, Nina married the former Colorado senator Floyd Haskell, Linda and Cokie served as her attendants (with Judge John Minor Wisdom, earlier a source, performing the ceremony). With their husbands, the friends became regulars at Cokie’s annual (and growing) “shiksa seder.” Most Saturday nights, they’d all grab dinner at the Pines of Rome, in Bethesda, a white-tablecloth neighborhood Italian joint owned by Cokie’s next-door neighbor, before heading to the movies.

When someone in the press corps gossiped about how Steve Roberts of the New York Times was having an affair with that reporter from NPR, they all laughed. Didn’t they catch that they both had the same last name?

Gossip, Nina, Linda, and Cokie style, involved trading observations about the cads of Capitol Hill. Linda had been chased around a desk by a senator, but he was so old that she knew he’d never catch her. Cokie talked of her innocence in believing that a wedding ring on her finger would provide armor against other men’s advances. Said Nina, “You knew who was a bottom pincher and which Senator not to sit near,” or when it was best to dress “like a nun.” Scenes could be avoided, for the most part, if you moved away; the man usually knew better than to push it. Usually.

They’d tolerated this kind of behavior for years, gritting their teeth and repressing their anger. Yet, now that they found themselves united together, they drew a collective line in the sand to show they were done with being regarded as second-class. To wit: When the producers of the Miss America pageant, looking to infuse some intellect into the competition, inquired about having host Bob Edwards interview the contestants about current events, the women intervened with an emphatic “go away.” A beauty pageant was a cultural force with which they did not wish NPR’s name associated.

For all this, a bemused male coworker christened the women and their corner of the office, with equal parts admiration and derision, the “Fallopian Jungle.” Yet those who sniffed at the ladies of the jungle did so at their own peril. The women had all lacked allies and friendship for so long that they were unabashed in their delight in having found one another — and this work. No longer did they need to gaze at or be at the hand of the old boy network. They were firm and proud leaders of the hard-won old girl network they’d hatched.

Not, however, universally. While they might be quick with advice and praise, one talented but volatile female reporter was so reviled by this trio of star reporters (and they by her) that a wall had to be erected to separate her desk from theirs. And though there were countless admirers in the audience who kvelled with delight at the sound of strong, smart women delivering their news, there were, of course, the inevitable detractors. One listener in Missouri wrote to Frank that he found the women insufferable, blasé, didactic, and elitist. All Things Considered, he said, should be renamed “All Things Condescended” — jettison the “trite, rhetorical” format that treated listeners as if they “were grade school kids at a mandatory assembly at an eastern boarding school.”

Let the critics say what they wish, said the women. Triumphant, they stood watchfully over the barricades they’d busted down. There was no going back.