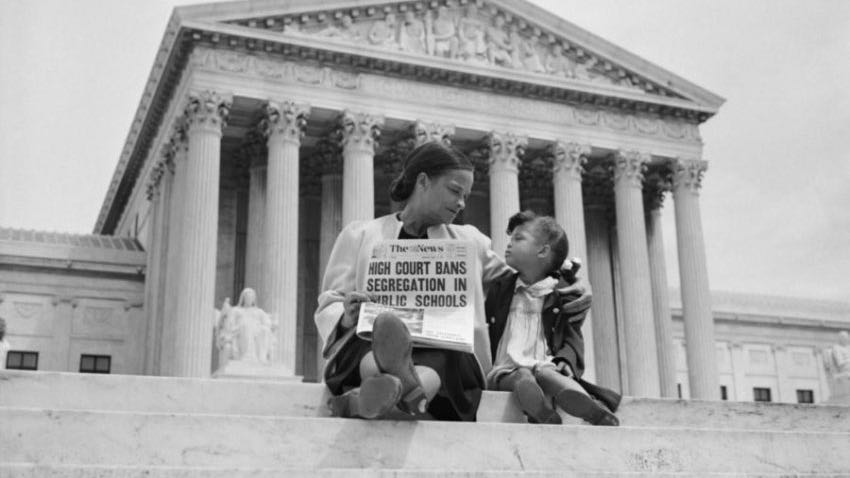 Nettie Hunt and daughter Nickie sit on the steps of the Supreme Court building May 18, 1954, the day after the court's decision in Brown v. Board of Education.

Eyes on the Prize, the influential documentary series on the civil rights movement that debuted on PBS in 1987, returns to public television next month via broadcasts and a limited window for online streaming.

World Channel, the digital multicast service owned and operated by GBH in Boston, secured rights to broadcast all 14 episodes of the series and to provide streaming access to the first six episodes on PBS platforms.

Eyes on the Prize originally aired in two parts. The 1987 series covers the seminal historical events of the movement from 1954–1965. Eyes on the Prize II, which focuses on 1965–1985, debuted in 1990. The 14 episodes of the entire series feature interviews and newsreel footage examining events and turning points such as the murders of Emmett Till and Medgar Evers; the integration of public schools in Little Rock, Ark.; the Poor People’s Campaign; Malcolm X’s rise in the Nation of Islam; the role of the Black Panther Party; and the election of Harold Washington as the first Black mayor of Chicago.

“When first broadcast in 1987, Eyes on the Prize was acclaimed as the defining series on race in America. Today, it still resonates and is relevant to an entirely new generation of those seeking answers about how we arrived at this moment in our country,” said Chris Hastings, EP for World Channel, in a news release.

The timing of the rebroadcast on World coincides with the anniversary of the death of Martin Luther King Jr., he noted.

The late independent filmmaker Henry Hampton created and produced Eyes on the Prize through his company Blackside Inc. Securing funding of the first series was so difficult that in 1986 Hampton took out a second mortgage on his house to meet payroll, filmmaker and series producer Jon Else recalled in Current’s 1998 obituary of Hampton. The series, narrated by the late civil rights activist and politician Julian Bond, won Peabody, Emmy and Alfred I. duPont Awards. It was also nominated for an Academy Award for best documentary feature.

World Channel has been working since last summer to renew the rights to Eyes on the Prize, Hastings told Current in a statement. Its programmers were “inspired to bring the series back because of the continued conversations on race that were re-ignited last spring,” he said.

World presented rebroadcasts of the series in 2016, when it also produced a special that contextualized the documentary for contemporary audiences. That program, Eyes on the Prize: Then and Now, was also packaged and distributed as a 30-minute pledge special.

World Channel is produced in partnership with the WNET Group in New York and distributed by American Public Television. Streaming provisions in the licensing deal will bring all six episodes of Eyes I to World Channel’s website, PBS’ website, the PBS Video app and PBS Passport.

Hastings wasn’t able to acquire streaming rights for the eight episodes that make up Eyes II, he said. “It is a goal of mine to make that happen in the future, provided we can acquire new funding,” he said.

In addition, the American Archive of Public Broadcasting released content related to Eyes on the Prize, including unedited interviews that were preserved by Washington University Libraries in St. Louis. Michelle Kelley, a cinema studies scholar, curated the online exhibit.

Judas and the Black Messiah, the 2021 Oscar-nominated film starring Daniel Kaluuya as Black Panther leader Fred Hampton and Lakeith Stanfield as FBI informant William O’Neal, has also renewed interest in Eyes on the Prize, Hastings acknowledged. Producers from Blackside interviewed O’Neal in 1989 for the 12th episode of Eyes on the Prize.

In the interview, published in six parts on AAPB’s website, O’Neal discussed infiltrating the Illinois chapter of the Black Panther Party and his role in the 1969 raid by the Chicago Police Department in which Hampton was shot and killed. In one segment, O’Neal disclosed that he drew diagrams of Hampton’s apartment for an FBI agent. O’Neal also denied rumors that he drugged Hampton before the raid. The storyline of Judas and the Black Messiah suggests that O’Neal reluctantly drugged Hampton’s drink. The film ends with archive footage of Hampton’s speeches, his funeral procession and the interview O’Neal gave for Eyes on the Prize.

In January 1990, days before the debut of Eyes II, O’Neal reportedly ran onto an interstate and died after being hit by an oncoming car, according to the Chicago Tribune. His death was ruled a suicide, but O’Neal’s wife claimed it was accidental. In an interview with the Chicago Reader, O’Neal’s uncle claimed that his nephew felt guilty for his connection to Hampton’s death.