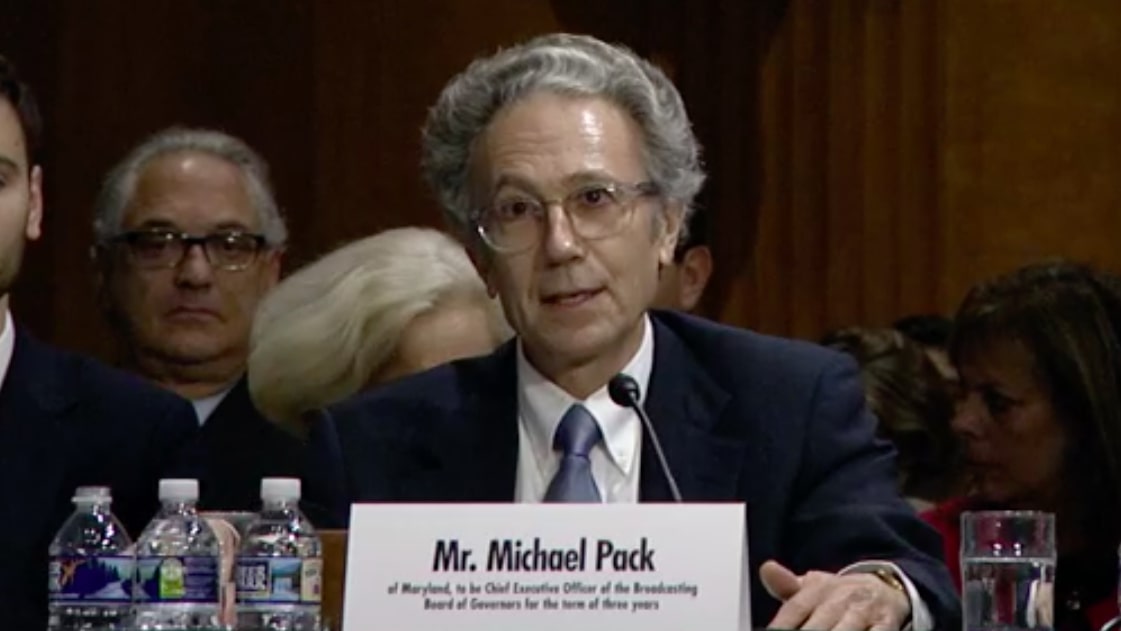 Michael Pack speaks at a September 2019 nomination hearing for the U.S. Senate Committee on Foreign Relations.

Attorneys have filed a motion to dismiss a lawsuit accusing public TV filmmaker Michael Pack of illegally funneling more than $4 million to his production company through a separate nonprofit.

The Feb. 18 motion responded to a lawsuit filed Jan. 5 by D.C. Attorney General Karl Racine. The lawsuit, which followed an investigation launched last year, was filed against Pack’s nonprofit Public Media Lab and Manifold Productions. The suit alleges that the PML funneled nearly all of its funds to Manifold over a 12-year span. The organizations share a business address.

“The nonprofit enabled Pack to line his company’s coffers with a stream of tax-exempt dollars without subjecting Manifold to a competitive bidding process, public scrutiny, or accounting requirements regarding its spending,” Racine’s office said in a Jan. 5 news release, adding that the office “seeks to recover the funds improperly granted to Manifold, to direct those funds to suitable nonprofit public-serving purposes, and to dissolve PML.”

In the motion to dismiss, attorneys for Pack’s nonprofit argued that the attorney general’s office failed to state a claim. A special motion to dismiss also invoked D.C.’s anti-SLAPP act, which is intended to prevent parties from using lawsuits to intimidate people who are exercising First Amendment rights.

“None of the factual allegations plausibly show that PML acted beyond its legal authority or contrary to its charitable purposes,” the attorneys said. They also accused the attorney general of initiating the lawsuit to punish Pack for public speech.

Pack founded Manifold Productions in 1977. The company produced a PBS documentary on Supreme Court Justice Clarence Thomas last year. Other films distributed by PBS focused on nuclear power and Alexander Hamilton. Pack’s wife, Gina, has been president and CEO of the company since at least June 2020, according to the attorney general’s office.

Public Media Lab is incorporated in Washington, D.C. Tax documents say the nonprofit’s purpose is to receive and award grants to develop and support educational documentary films and filmmakers in the U.S. and abroad. PML took in $900,000 in contributions and grants in fiscal year 2017, according to the documents. Pack is the nonprofit’s president, CEO and director, according to the attorney general’s lawsuit.

The suit also said the nonprofit made “material omissions and false statements” on its 990 filings. Pack was the only reported active member on PML’s board of directors and was the only officer for the organization, according to the suit.

A hearing has been scheduled for April 23 in D.C. Superior Court. A lawyer for Pack and the D.C. attorney general’s office declined comment. Gina Pack did not respond to a request for comment.

A PBS spokesperson said the broadcaster is not working with Pack or Manifold Productions on any new films, adding that PBS does not have plans to rebroadcast any of his previous films.

This suit against Pack follows another that the D.C. attorney general’s office won in October. That decision resolved a dispute over control of the Open Technology Fund, a nonprofit overseen by the U.S. Agency for Global Media. As former CEO of the agency, Pack was accused of attempting to unlawfully control the organization’s leadership.