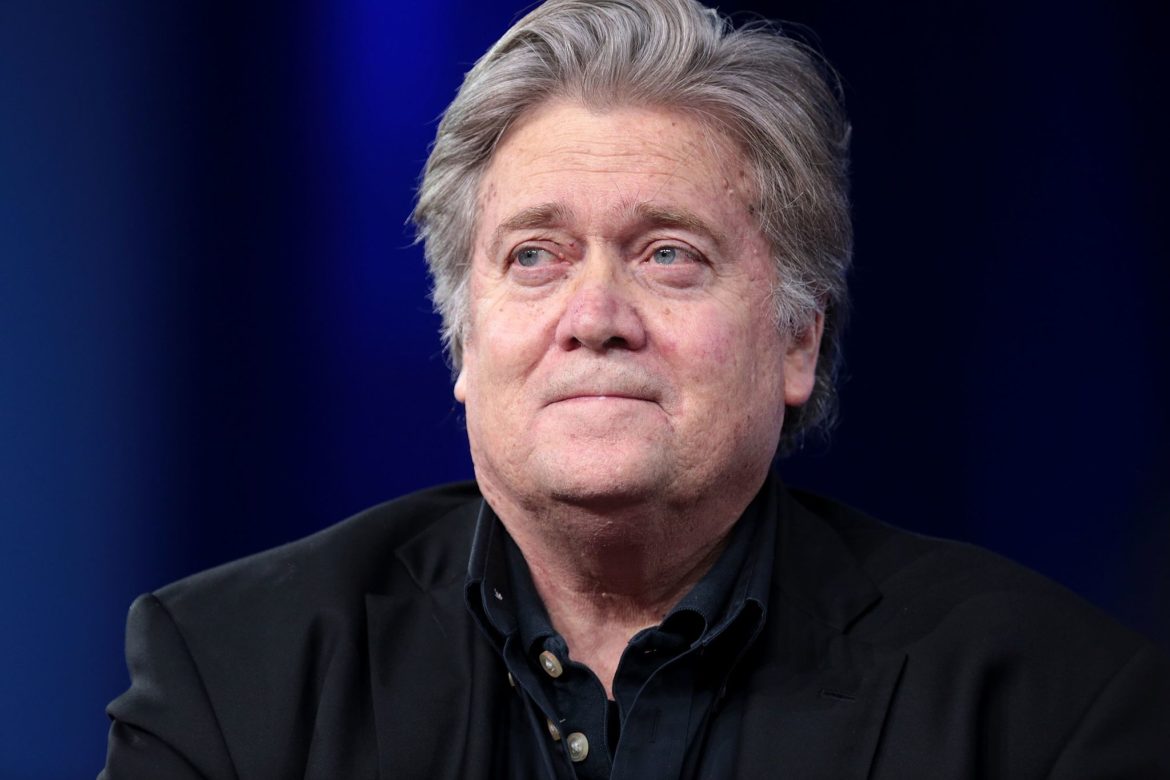 Even as President Trump seeks to end all federal funding to CPB, one of his most infamous aides has firsthand knowledge of the opportunities public media presents to independent filmmakers.

White House Chief Strategist Steve Bannon, the former Breitbart News executive chair and a ringmaster of the white nationalist “alt-right” movement, previously led a very different — some might say alternative — career in the film industry. And two of the films he executive-produced have associations with PBS and CPB.

Rickover: The Birth of Nuclear Power, a documentary about the Navy officer who oversaw development of the world’s first nuclear-powered submarine, premiered on PBS in December 2014. And The Last 600 Meters, a documentary about the Iraq War battles of Najaf and Fallujah, was primarily funded by a CPB grant and was originally conceived to air on PBS.

Both films were directed by conservative filmmaker Michael Pack, a former senior VP of TV programming at CPB and founder of the independent company Manifold Productions. Pack’s wife Gina Pack serves as Manifold’s president. The company’s other PBS documentaries include recent specials about George Washington and Alexander Hamilton.

The White House did not return Current’s request for an interview with Bannon, who was removed from Trump’s National Security Council April 5 but remains an adviser to the president.

Pack, who is also president of the conservative think tank The Claremont Institute, declined multiple requests from Current for an interview. But he recently praised Bannon’s documentary career, while assailing the documentary landscape as a whole, in a March 10 column for the conservative website The Federalist.

“Documentaries have been the almost exclusive playground of the Left, often the far left,” Pack wrote, accusing film schools, foundations and documentary distributors of liberal “indoctrination.” He expressed hope that having “a documentarian in the White House” would “break their politically correct stranglehold and open a path for young, talented conservative filmmakers.”

As an exec-producer, Bannon came on board Pack’s films after they had already wrapped production. He had no creative input into the films and was primarily involved in promotion, according to Joe Wiedenmayer, editor on both Rickover and The Last 600 Meters. Wiedenmayer told Current he had no contact with Bannon during his work on the films. Nor did PBS, according to PBS spokesperson Jennifer Byrne.

Bannon has longtime associations with far-right nationalist politics and even refers to himself as an “economic nationalist.” Other films with his involvement have been more explicitly political: The Undefeated is a feature-length endorsement of Sarah Palin, while Clinton Cash investigates Bill and Hillary Clinton’s financial dealings with foreign governments. But that partisanship didn’t carry over to his public TV films, in Wiedenmayer’s opinion. 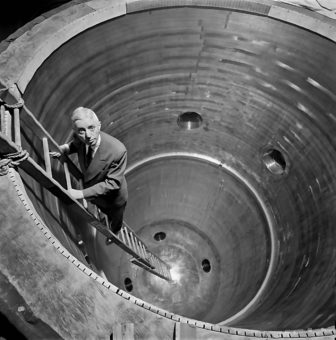 “I didn’t see anything political about Rickover,” Wiedenmayer told Current. “I just saw, what a great character to make a film about. Most people have never even heard of this guy.”

The documentary examines the life and times of the famously blunt and combative Admiral Hyman G. Rickover, longtime director of Naval Reactors, the office overseeing the Navy’s nuclear program. As a Navy captain in the late 1940s, Rickover built up the program from the success of the USS Nautilus, the world’s first operational nuclear-powered submarine.

Still, Rickover does have conservative undertones. It unfolds with an eye toward promoting the benefits of nuclear power in general, with an interviewee stating the technology is “100 percent safe.” The film mocks anti-nuclear activists of the 1970s and narrator Joan Allen sneers at “Hollywood’s politically correct fantasy” — referring to the 1997 remake of 20,000 Leagues Under the Sea that imagined a solar-powered Nautilus submarine, rather than the nuclear-powered one of the 1954 adaptation.

But Rickover also paints a picture of a Jewish immigrant who advocated for science education and had a change of heart about his legacy late in life, saying that he wished nuclear power had never been discovered. In short, the film’s protagonist embodied complex, contradictory ideas, not all of which seem to be compatible with Bannon’s ideology.

Bannon isn’t the only big name attached to Rickover. The documentary also stars acclaimed character actor Tim Blake Nelson in dramatic re-enactments, white wig plastered on his head as Rickover berates subordinates and superiors alike in his office over the course of several decades. Narrator Allen is a three-time Oscar nominee. And one of the film’s central interview subjects is former President Jimmy Carter, who served in the Navy’s nuclear submarine program under Rickover and has called him the greatest influence in his life after his parents. (Ironically, Bannon was a naval officer under President Carter and has stated in interviews that his anger at Carter’s tenure pushed him into politics.)

PBS no longer holds the broadcast rights for Rickover, according to Byrne. But DVDs are still available for sale through the PBS online store, and the network also has the film available for digital rental on various platforms.

600 Meters away from air — and growing

Bannon’s other would-be public TV production, The Last 600 Meters, is harder to track down.

Manifold’s website lists the film as having been completed in 2008. That was also the year it won the Founder’s Choice Award at the GI Film Festival, an annual event in Washington, D.C., that celebrates movies about the military. But the website also classifies the film as “upcoming.” Apart from a handful of special screenings over the years, it has yet to be formally released. Manifold did not answer requests for a screener.

The only review available online comes from Breitbart News, published in 2009, three years before Bannon became the site’s executive chair. The rave describes graphic, firsthand accounts of the two bloodiest battles in the Iraq War and calls the film “stunning.”

Wiedenmayer said the film is an on-the-ground account of the battles, told without narration. Much of its footage, including an extended passage devoted to the Second Battle of Fallujah, comes from cameramen who were embedded within the military, though they had not shot the footage specifically for the film.

“It’s going to be on PBS eventually,” Pack said in a 2010 interview with right-wing media-watchdog group Accuracy in Media. “PBS has generously given us a chance to try to raise money to get a theatrical release first, and I would very much like to do that.” But that theatrical release hasn’t yet materialized.

Pack elaborated on the PBS delay in a 2015 interview with Bannon and former Breitbart News Editor-in-Chief Alexander Marlow on SiriusXM Radio’s “Patriot” channel, where he said PBS had initially agreed to show the film but was pushing back on Pack’s inclusion of a graphic beheading scene.

“It’s a really horrendous scene. I mean, I was physically sick having to go through some of the material.” — Joe Wiedenmayer, editor on “The Last 600 Meters”

“I’ve been making documentaries for PBS for over 30 years, and I’ve never faced so much resistance and so many roadblocks as I have with 600 Meters,” Pack told Bannon in the interview, according to a Breitbart summary.

Wiedenmayer also said the beheading scene, which incorporated actual YouTube footage of an American being beheaded, was a source of conflict. “I remember having conversations with Michael: ‘Well, we can truncate it. We don’t have to take it all the way through,’” he said, adding that Pack was willing to compromise on the scene. “It’s a really horrendous scene. I mean, I was physically sick having to go through some of the material.”

PBS and Pack had been holding “active discussions related to the film’s content, timeliness, and suitability,” said Byrne, who declined to elaborate on specific issues.

Eventually, according to Wiedenmayer, the discussions appear to have shifted from the content of the film’s beheading scene to the relevance of airing a movie about specific Iraq War battles many years after they had taken place. This was the point at which Bannon came on, to aid in promoting the film.

Pack has not pitched anything new to the network in over a year, according to Byrne. A New Years 2017 greeting from the Pack family to friends and associates, obtained by Current, said Manifold and Claremont had jointly launched production of a biography of Supreme Court Justice Clarence Thomas, but the message did not mention PBS or Bannon.

Both parties have maintained good terms. “PBS has a very positive relationship with Michael Pack,” Byrne said. And in interviews, Pack has expressed gratitude toward PBS and CPB for giving his films a home. Yet when it comes to Bannon, the “documentarian in the White House” has shown no inclination to stick his neck out for public broadcasting.