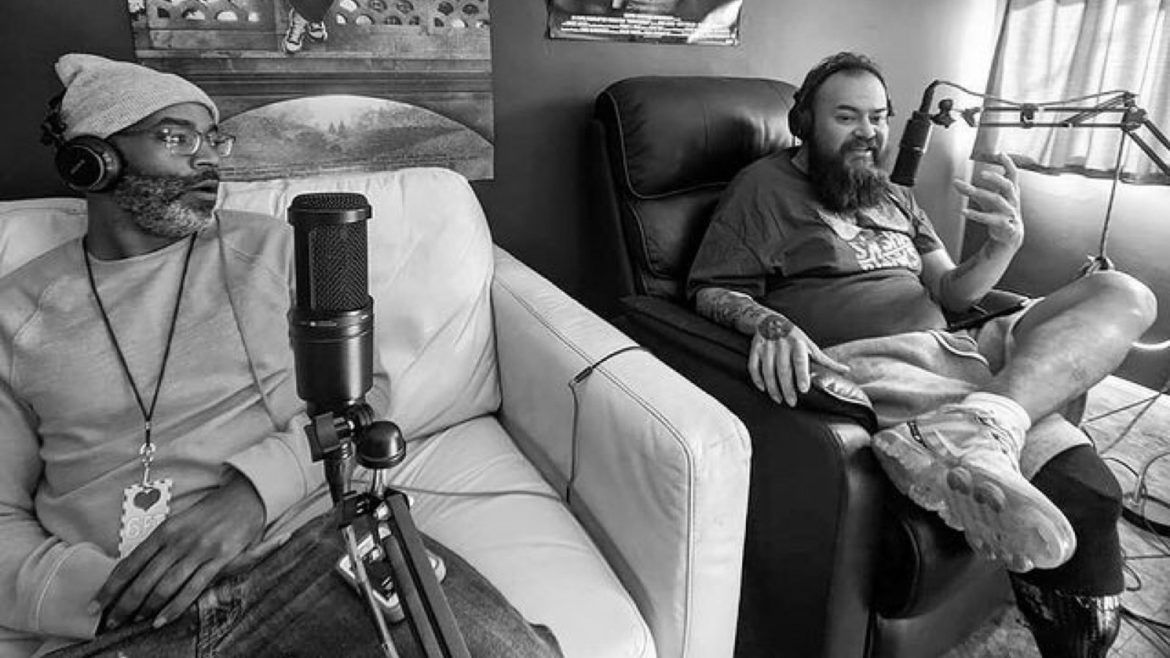 Parker Edison and 2Mex, a Los Angeles underground rapper, record a segment for an upcoming episode of the podcast.

San Diego’s KPBS aims to reach a younger and more diverse audience with The Parker Edison Project, a new podcast hosted by a local rapper and journalist.

On each episode of the biweekly podcast, host and co-creator Parker Edison interviews San Diego personalities to explore what he calls the 10 core tenets of American culture, including fashion, geography, sex and symbols. “From the laws to the gallery walls, we explore who controls the narrative and its impact on how we see ourselves,” Edison said in the introduction to the first episode, which was released Feb. 10.

Edison told Current that the podcast allows San Diego to “get its due credit” while also focusing on cultural topics that listeners can relate to. “No one’s talking about one of the best cities in America,” he said. “We’re so influential. We’re so cool. Everyone visits us. I guarantee you, if you watch television for a couple of hours a day, San Diego is going to come up.”

The Parker Edison Project previously aired as an Instagram Live talk show on Edison’s profile under the title P(latform)TV. In each short episode, Edison shot videos of his daily life to show the variety of people and situations encountered by a working artist.

After the fifth episode, KPBS sound engineer Kurt Kohnen, who also raps under the moniker iD the Poet, asked Edison whether he would consider expanding his videos into a podcast. “It was very much like making a demo and having someone go, ‘Hey, I really like that demo, would you put it out on this label?’” Edison said. “[And] here we are. They picked it up.”

“Parker came at a time when we were really open and very deliberate in looking for projects exactly like this, because we have not done something like this,” said John Decker, KPBS’ associate GM for content. “Our podcasts have been good, but nothing that is really rooted in culture the way the Parker’s is.”

KPBS is funding The Parker Edison Project in part through its Explore Local Content Project, an initiative to create local programming. According to Decker, Edison also benefited from opportune timing as a result of the pandemic.

“During COVID, many of our local productions were sidelined,” Decker said. “That happened at the same time that this country was going through a very significant reckoning with its social history and with the roles of diversity and everything else. What I decided at the beginning of this fiscal year was to pivot — let some of our existing projects chill, and take some of the expenses that would normally go to those projects and devote them to other projects. This is what we were lucky enough to help fund. Parker came in at the right time, frankly.”

“If we are going to be successful in increasing the diversity of local content here in San Diego through KPBS … we must also acknowledge that there are many different ways to create podcasts and many different ways to create radio or web or TV,” Decker added. “So Parker has complete creative freedom on this project. What we’ve done is provide him with some financial backing and, frankly, a good environment to workshop his ideas.”

In the podcast’s first episode, Edison examined fashion in films and photography of people of color. The host explored how “film follows fashion, fashion follows film and the real-world impacts of that” during a conversation about hoop earrings in film with schoolteacher and singer Latanya Lockett.

Edison and Chaunteal Webb-Candler, co-owner of the San Diego Guardians basketball team and founder of the HBCU Alumni San Diego, played “Six Degrees of Seperawayans,” a twist on the Six Degrees of Kevin Bacon game that instead centered on members of the Wayans Family. And activist and photographer Alanna Airitam appeared on the show to discuss photographing people of color and escaping the cubicle lifestyle to pursue creativity.

Each episode of the podcast ends with a musical performance. The first one closed with the podcast’s music supervisor, Tres “Sojourn” Hodgens, performing his song “More Than Rap.”

According to KPBS’ Decker, The Parker Edison Project’s debut episode was the station’s second–most-downloaded podcast in the week after its release. The top podcast was an episode of Port of Entry, a KPBS show that focuses on the personal stories of border crossers and the culture and creativity people living on the border.

In an email, Decker said that the station hopes the podcast “will reach a young audience of color” and added, “I imagine it will attract an engaged, socially conscious audience that cares about community.”

KPBS is promoting the podcast across all of its platforms except TV and has inked promotional deals with cultural podcasts from the Canadian Broadcasting Corp. Edison said PlatformCollection, a blog and artist management group, is also providing promos to local DJs, businesses and tastemakers.

“I come from rap music, so we’re pushing the podcast trailer like a new music single,” Edison said in an email.

In the short term, Edison aims to produce three seasons of 10 episodes each, eventually working up to seven 10-episode seasons. Decker said KPBS is “committed to the podcast as long as Parker is. For now, it’s one season at a time.”