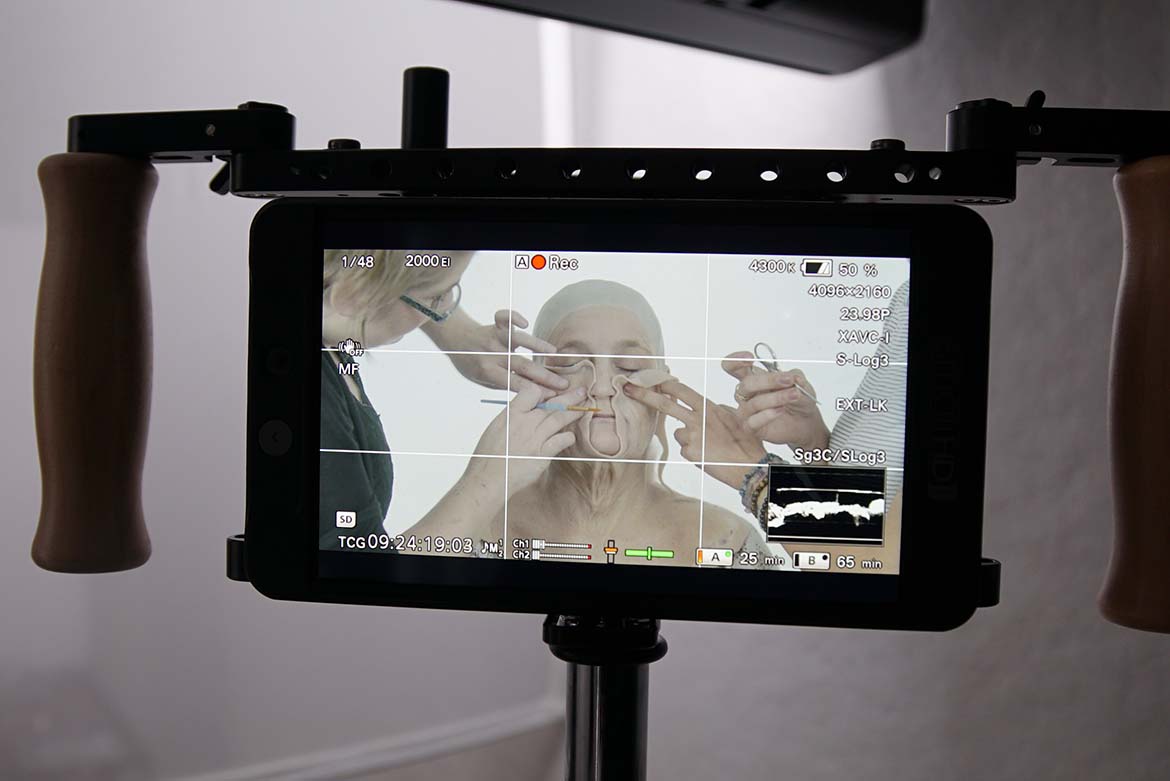 Makeup professionals apply aging makeup to Susan, one of the parents who participated in "Fast-Forward."

A forthcoming PBS documentary produced by FLX Entertainment blends traditional documentary filmmaking with reality TV-style experiences to help young adults and their parents prepare for the physical and cognitive impacts of aging.

Premiering March 24, Fast-Forward follows four millennials and their baby boomer parents as they go through an “aging boot camp” that challenges them to confront the physical limitations they will likely encounter at age 70 and older.

To stage such an experience, Fast-Forward director Michael Eric Hurtig turned to researchers at the MIT AgeLab, the creators of a clunky suit known as AGNES, or Age Gain Now Empathy System. Subjects in the documentary wear the suit, which uses a system of weights, bungee cords and uneven shoes to impede mobility. A pair of goggles simulate a variety of age-induced visual impairments.

“Part of our goal was to see how we could engage younger people to think about aging so that they might get a little bit of a leg up, both for themselves and for their families,” Hurtig said. “And we landed on the idea to give younger people this immersive experience of being older.”

FLX Entertainment produced the film in association with Next Avenue, a digital platform that creates and aggregates content for the baby boomer generation. Hurtig, the founder of FLX, has spent most of his career producing public television documentaries and news programs. His credits include Sacred, a 2018 PBS documentary about religion worldwide, PBS Newshour and Metrofocus, the newsmagazine produced by WNET in New York City.

Fast-Forward is designed as an intergenerational experience and reference point for difficult conversations. It prompts its millennial subjects to consider how they might care for their aging parents in the future. At the same time, it encourages both young adults and their parents to develop plans for maintaining their quality of life as the aging process begins to impede their regular abilities.

The physical and visual transformations of the “aging boot camp” often elicited emotional responses as subjects confronted their own mortality. Susan, one of the mothers who participated in the film, sat with her daughter Sophie on her porch and shed a tear as she reflected on the experience. “Having all of the external things have made me think about more internal things,” she said.

At the beginning of the film, Susan acknowledged that she “didn’t really think about aging at all.” After the boot camp ended, Susan and Sophie agreed that they needed to stop avoiding conversations about aging and have them sooner rather than later.

When the documentary premieres, Next Avenue will publish email courses and a digital toolkit of resources designed to help viewers prepare their own aging plans.

Few older adults take steps to prepare for the aging process, said Colleen Wilson, VP of digital publishing at TPT in St. Paul, Minn., which produces Next Avenue. It’s especially important for them to create such a plan to articulate their wishes and a plan of action in the event of an unexpected crisis.

A Next Avenue reader survey found that 65% of adults over 65 had started an aging plan but hadn’t completed it. Just 18% of respondents described their plans for aging as comprehensive.

“We have identified the top three steps that people can take that would be most important, like the most essential for a plan for aging, and we’ve developed email courses for those,” Wilson said.

The three email courses guide participants through the process, including how to identify support systems for when age begins to impede daily activities, codify agreements about the level of support needed and complete a living will.

Broadcasts of Fast-Forward will point viewers to these resources. At three moments in the film, on-screen graphics will display a phone number that viewers can text for information about how to create plans for aging. In addition to engaging younger viewers, the textable prompts will help Next Avenue track viewer engagement.

“Having data on how many people were watching, how many people took action based on the on-screen prompts and how many people actually then completed that task on digital … gives us an invaluable picture into this whole educational experience that we’re designing for our audiences,” Wilson said.

Digital and community-based screenings of Fast-Forward are planned for at least six months following its PBS debut, according to Hurtig. FLX has developed an engagement and outreach campaign targeting community organizations, academic institutions, nonprofits and nongovernmental organizations within the aging and end-of-life planning sector. Local PBS stations will also hold digital screenings for the documentary. FLX has tentative plans for in-person and outdoor screenings if the restrictions for preventing coronavirus spread ease over the next several months, he said.

“Our primary goal is to get the film screened as much as possible and, in doing so, surrounding the film with digital channels, social channels, website content that is going to provide, in a sense, the same experience that the cast went through,” Hurtig said.

The John A. Hartford Foundation and the Gordon and Betty Moore Foundation backed the documentary and accompanying outreach campaign with grants totaling $1.45 million.

Correction: An earlier version of this story incorrectly described Next Avenue as a co-producer of Fast-Forward, but FLX Entertainment produced the film in association with  Next Avenue. This article has also been revised to clarify that the MIT AgeLab created the AGNES suit prior to filming the documentary.