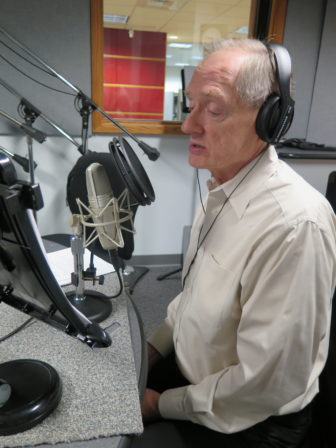 Schuster records an episode of Stories for the Ages in a WOSU studio.

A new podcast produced by an Ohio public radio station is offering advice for those beginning the transition into aging and retirement.

Produced by WOSU in Columbus, Stories for the Ages debuted Jan. 4. Host John Schuster, a Columbus-based author, educator and executive coach, talks with a variety of guests who share their experiences with aging and insights they have gained along the way.

While Stories for the Ages is WOSU’s fifth podcast, it is the first the station has produced solely as a podcast and in partnership with an outside collaborator like Schuster. Its other podcasts tie into WOSU radio shows and often feature previously aired radio content.

The idea for the series emerged as a result of WOSU’s participation in Next Avenue, a public media service providing content for older Americans, according to WOSU GM Tom Rieland.

As part of the station’s association with the project, Schuster led a series of public forums and seminars for WOSU focusing on topics such as living with vitality and entering the later third of life. This led to further discussions between Rieland and Schuster about future collaborative projects, which culminated in the production of the podcast.

“We started talking about other opportunities to work together, and I brought up a podcast possibility, which is something that we would like to experiment and kind of dip our toes in,” Rieland said.

Given that the aging process is a universal experience, the series focuses on the growth that comes with it as opposed to the potential for cynicism and uncertainty, Schuster said.

When approaching aging, Schuster found his personal experience to differ from that of others. Instead of experiencing loss and pain, “time slowed down in a good way,” he said, providing him more time to pursue friendships, hobbies and community involvement. The experience inspired him to develop and produce the podcast.

“I saw myself growing, and I felt big parts of me emerging,” Schuster said, referring to his increased spiritual, recreational and personal self-recognition. “A lot of the cultural talk, a lot of what’s in the air is how much we decline. There’s varying amounts of luck and good fortune that happen here, but overall, I felt that people were missing the gains and were afraid.”

The first episode of Stories for the Ages includes a conversation with an expert about the effect of aging on love and relationships, and an interview with an 87-year-old friend of Schuster’s who speaks highly of friendships developed late in life. The host also shares quotes from authors who approach the topic of aging from optimistic perspectives. Each episode is 30 to 40 minutes in length.

When deciding what to include in the series, Schuster said he sought out individuals with diverse and encouraging experiences.

“What made them stand out to me was the amount of fun and learning and positivity that they all had, but also the variety,” Schuster said. “By the time all five episodes will be out, there’s a wide variety of people ages 57 to 87, and people approaching aging very differently.”

That age range corresponds to WOSU’s audience, which has a median age of 60-plus, according to Rieland. With this in mind, WOSU is marketing Stories for the Ages through digital platforms including newsletters and social media.

Though Stories for the Ages targets listeners ages 55 and older, Schuster hopes audience members of all ages can find valuable takeaways in the series.

“There’s a great chunk of general life wisdom all over the podcast,” Schuster said. “And also just a great amount of intergenerational mentoring happening indirectly.”

Rieland said he hopes the podcast will extend beyond its first five episodes.

“I’m hopeful that in six months we’re starting a second series,” he said. “John has a lot of different issues that we didn’t have time to deal with in the first series, so I just think there’s a lot of possibilities to do these things and just experiment and see what the results are moving forward.

Stories for the Ages can be found in iTunes and on WOSU’s website.