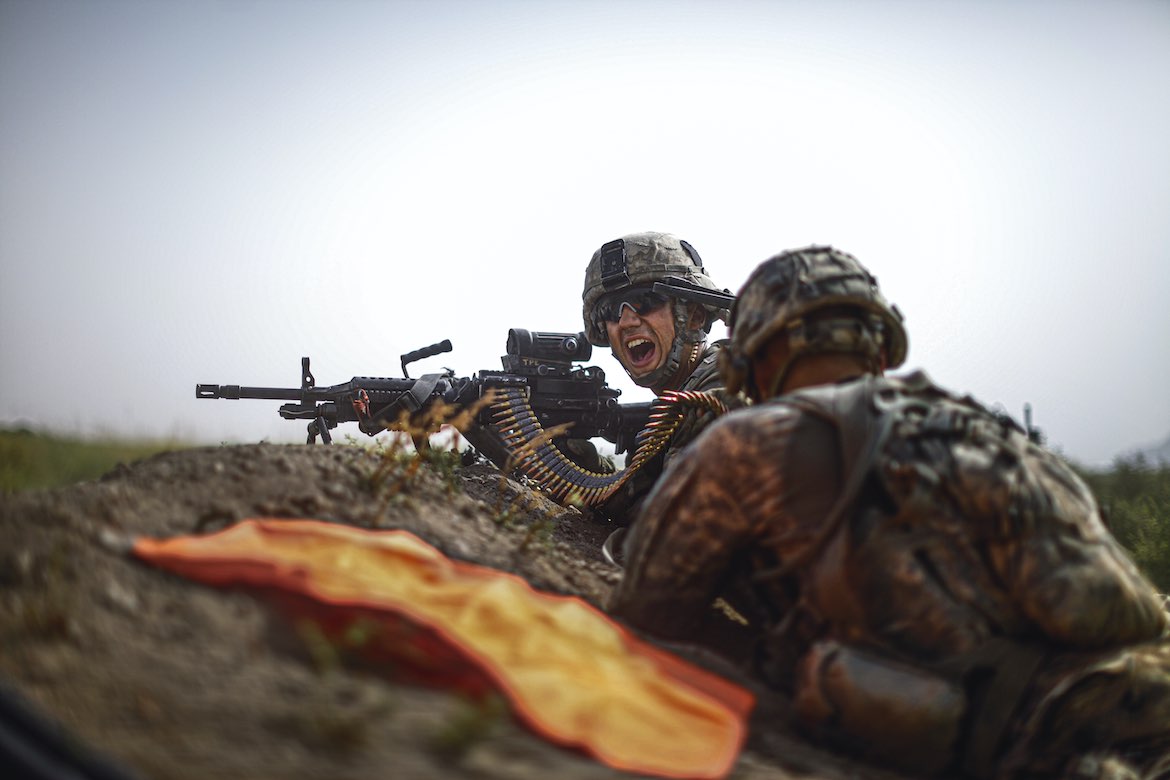 Spc. Jotiar Saaty of the 101st Airborne yells for more ammunition during a 2010 gun battle with insurgents in Afghanistan's Kandahar province.

“David always did find it amusing, trying to explain to people that he was a photographer for a radio network,” said NPR correspondent Jason Beaubien. “And certainly, people who didn’t know NPR or know that we were trying to expand what we were doing online would often find it amusing. David was always quite happy to play along with that.”

Gilkey was 50 when he was killed during a Taliban ambush in Afghanistan in June 2016. Zabihullah Tamanna, a freelance Afghan journalist and interpreter who was working for NPR, also died in the attack.

Gilkey traveled the world during the nine years he spent at NPR. Now a collection of 187 photos from those assignments appears in a new book, Pictures on the Radio: From the Frontlines of History with NPR News (powerHouse books, $50).

“We want this book to remind everyone of David’s ability to use his camera to draw us into events and parts of the world that we would probably never see,” his mother Alyda Gilkey wrote in the preface to the book. “His ability to capture the humanity in stories from the earthquake in Haiti, the tsunami in Japan or the Ebola epidemic in Africa and hold the viewer’s attention was his unique talent.”

Gilkey grew up in Portland, Ore. His father, an amateur photographer, equipped the family home with a basement darkroom and rewarded his son’s good behavior with access to it. An avid photographer by high school, Gilkey studied the subject at Oregon State University but dropped out after his first newspaper internship. He became a staff photographer at the paper, the Daily Camera in Boulder, Colo., andtook on assignments typical for a small metropolitan newspaper.

But he was eager for more, especially foreign assignments. Knight Ridder, the Daily Camera’s parent company and then the second-largest newspaper publisher in the country, sent Gilkey abroad. He shot the downfall of apartheid in South Africa and warfare in Rwanda. His photos were printed in the Miami Herald, the Philadelphia Inquirer and many other Knight Ridder publications.

Gilkey cemented his reputation in the mid-1990s at Knight Ridder’s Detroit Free Press, where he worked for 11 years and racked up a series of honors, including Michigan Photographer of the Year. Most assignments kept Gilkey close to the Motor City, but the terrorist attacks of Sept. 11, 2001, changed everything. Two weeks later, he was on the ground in Afghanistan covering the U.S. invasion for Knight Ridder.

“Reporting in general, you can do sort of after-action reporting and tell a story and reassemble a story that’s already happened, especially in a conflict zone,” Gilkey explained in a 2013 post on NPR’s website. “But as a photographer, you don’t get that choice. You have to be there, and in most cases, you have to be in the middle of it.”

Gilkey joined NPR in 2007 when the newsroom was building its digital news operations and adding video coverage to its website. Initially hired as a videographer, Gilkey had just won a national Emmy for “Michigan Marines: Band of Brothers,” a 23-part Free Press video series following a Marine Reserve unit from Michigan that fought in the 2006 ground war in Iraq.

Technical limitations at NPR prevented the newsroom from producing videos as quickly as desired, said Keith Jenkins, a veteran Washington Post photographer who is now senior director of visuals at NPR. Gilkey and fellow videographer John Poole pivoted to produce still photography. When Jenkins arrived at NPR in 2008, his job was to set up and lead multimedia operations.

Early in his career at NPR, Gilkey found himself covering the outbreak of fighting between Israeli and Palestinian forces in the Gaza Strip. A sniper firing rubber bullets hit Gilkey’s lens, leaving a dent and knocking the camera from his hands.

“It definitely rattled him,” said Jenkins, who was Gilkey’s editor at the time. “Clearly, if the sniper could get the lens, he could have gotten anything else.”

For the rest of his life, Gilkey found himself in the middle of all manner of conflicts and disasters. He did not take unnecessary risks, Jenkins said. Gilkey was “a lot more cautious” than other photographers working overseas.

“We would be in places that were one step away from hell, and he would create these images … that were actually really beautiful,” said Beaubien, who collaborated with Gilkey to report on recovery and rebuilding of Haiti after the 2010 earthquake. “They were composed in a way that times were like paintings. You know — some security guy just emerging from this smoke and fog in the midst of this fire … burning in downtown Port-au-Prince amidst all the rubble. The images themselves were beautiful, even as what was happening around was so devastating and awful.”

Pictures on the Radio is divided into nine chapters and includes Gilkey’s photography from Haiti and a more relaxed weeks-long assignment travelling across Russia on the Trans-Siberian Railway. The book begins and ends with Afghanistan, focusing first on the combat Gilkey witnessed and finally on the country’s people and culture.

The images are striking. Young soldiers are seen at rest and at war. One photo shows a soldier caught in mid-yell as he calls out for more ammunition during a gun battle. Another captures a sleeping Marine, the mud wall next to him decorated with images of pinup girls. Pictures from Haiti show death and suffering, including an image of a sea of bodies left on the ground outside a hospital.

“He put a lot of heart and soul into his work,” said Jenkins. “He was passionate about photography but also, or maybe even more so, really passionate about telling people’s stories. … I think that passion and that heart comes through in his pictures.”

“He was able to earn people’s trust, and people felt comfortable being vulnerable with him,” said Ari Shapiro, co-host of All Things Considered. “You see that when you look at his photographs. There is a layer of defense that drops away in those images, and it lets you into an inner life that not many people can get access to.”

Among his many accolades, Gilkey won the Sergeant Major Dan Daly Award in 2012 from the Marine Corps Heritage Foundation. The award, originally given annually to honor writing about Marines, expanded in 2011 to include excellence in photography. Gilkey was the first civilian to win it.

‘I really don’t smile that much’

Gilkey estimated in 2013 that he had spent the equivalent of four years embedded with U.S. forces in Afghanistan and Iraq.

“David felt a kinship with the troops because he had also been deployed for so long,” said Lawrence. “He was not a military wannabe, a military cheerleader. But after a while, he had a lot more in common with a veteran who had done three Iraq deployments and four Afghanistan deployments than he had with most other people.”

Lawrence met Gilkey in the winter of 2001 when both were covering the war in Afghanistan. Lawrence was reporting for the BBC then. “You noticed him because he looked some sort of a Special Forces master sergeant,” he said. Standing about 6 feet tall and built like a linebacker, Gilkey had taken to shaving his head.

After his death, his colleagues revealed his newsroom nickname: “Smiley,” for his somber demeanor.

“I really don’t smile that much,” Gilkey said in 2008. “It’s not that I am unhappy or depressed. It’s just not in my nature. I tend to take life a little seriously.”

Lawrence now covers veterans’ issues, a beat he developed with Gilkey. The two partnered on such stories as homelessness among veterans. Gilkey once interrupted Lawrence’s vacation to suggest covering a group of disabled veterans planning to climb two peaks in Yosemite National Park on Sept. 11, 2013. “He knew he was going to get great visuals,” Lawrence said, “but he was also thinking in terms of radio and thinking in terms of story.”

Having covered the war from the beginning, Gilkey was determined the soldiers and their fight not be forgotten.

“The Afghan war is something that he cared deeply about, both about the Afghans caught in the middle and the U.S. troops and especially the Marines who were there,” Jenkins said. “He felt somebody needed to tell their stories. Even as the country was losing interest, he felt it was really important that those stories still be heard.

“We at NPR felt it was still our responsibility to tell those stories, and that is ultimately what led him and the crew that was there at the end to still be there, and still be doing that work when a lot of other organizations had kind of stopped.”

Pictures on the Radio is only the latest tribute to Gilkey, who was posthumously inducted into the Michigan Journalism Hall of Fame in 2017. NPR erected two memorials. A series of his photographs hangs along one wall near the entrance of NPR West in Culver City, Calif. In the lobby of NPR headquarters in Washington, D.C., a tribute to both Gilkey and Tamanna notes that they “died in pursuit of bringing important stories to the world” and displays the Canon 5D camera that Gilkey was carrying when he was killed.

“Part of why that memorial, at least for me, is so powerful is that it’s just a camera sitting there,” Beaubien said. “It’s got the dust from Afghanistan on it. But I sort of … feel that blast that must have come at that camera and must have come at him in the final moment.”

“It’s a remarkably powerful memorial that they have there,” Beaubien said. “It’s a little hard to see it at times, but I’m also often reminded of the lighter moments with him when I see it. So it’s a complicated memorial, at least for me. … It accomplishes what it set out to do — to make you think about him, think about his life, think about the danger that he regularly would put himself in, in order to get some of these images.”

An earlier version of this article incorrectly identified Keith Jenkins as director of digital content. He now works as NPR’s senior director of visuals.