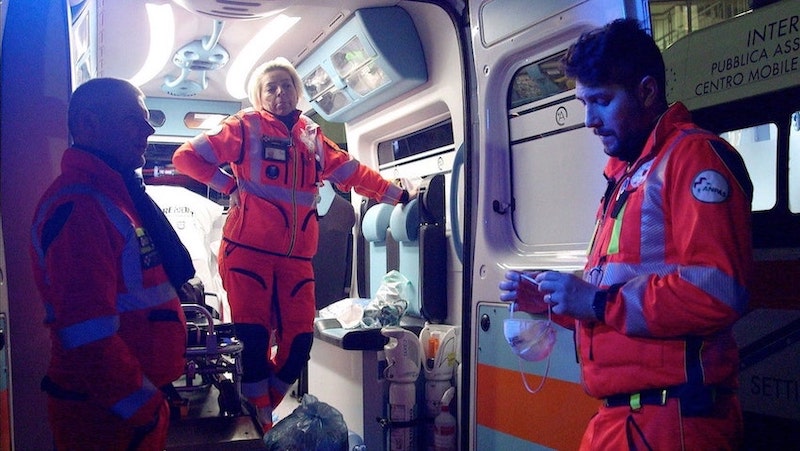 Red Cross ambulance volunteers during the first wave of the coronavirus pandemic in Milan.

Since March, Frontline has released nearly 20 documentaries and podcasts on the COVID-19 pandemic, ranging from how Italy has responded to the health crisis to how undocumented immigrants in the U.S. are taking care of themselves and their loved ones.

The number is especially impressive considering the circumstances. Correspondents, editors, producers, directors, camera operators and other personnel who work for and with Frontline are scattered around the world. In some cases, filmmakers are risking their safety heading into the field to document what is happening.

Raney Aronson-Rath, EP of Frontline, and filmmaker James Bluemel said that the investigative news team continues to face those challenges as they finish a new program that will show how different countries have responded to COVID-19.

The three-hour documentary has the working title Frontline: Pandemic and is scheduled to debut on PBS next spring. Producers aim to present it in two installments, a two-hour broadcast and  one-hour concluding program. Bluemel, who is based in London, pointed to a piece of poster board with colorful sticky notes that, right now, is the film. It represents a narrative that is still being pulled together.

Bluemel described one scene that is likely to get through the cutting room. It involves the story of a police officer shooting a 13-year-old boy in Nairobi, Kenya, while enforcing a coronavirus curfew. Bluemel said the film will follow the boy’s father, who finds a mural for his son near a depiction of George Floyd, who died in police custody in Minneapolis in May.

“It’s been really nice to build up this network of filmmakers across the world,” he said, adding that the teams are following strict safety protocols. “If someone doesn’t feel comfortable about going to shoot a demonstration, for example, then you have to respect their decision.”

Frontline is covering the pandemic from multiple angles. Its podcast, The Frontline Dispatch, has looked at two cities in Ohio for insights into schools and homelessness. It also reported on Native American communities in New Mexico; the intersection of race, police and the pandemic; and funeral homes in the Bronx, N.Y.

Frontline has also produced seven documentaries about the pandemic. The first was Coronavirus Pandemic, an hourlong special released in April that focused on how the U.S. became the country with the worst outbreak in the world. The upcoming film by Bluemel, his third for Frontline, will add to the series’ COVID-19 catalogue that also includes The Virus: What Went Wrong?; Inside Italy’s COVID War; America’s Medical Supply Crisis; Love, Life & the Virus; Undocumented in the Pandemic and COVID’s Hidden Toll.

Bluemel specializes in producing documentaries on international news topics by focusing on people who are living through the heart-wrenching events of our time, Aronson-Rath said. In 2016, Bluemel produced Exodus, which featured first-person stories from refugees and migrants fleeing war and persecution as they traveled to Europe. He delivered a sequel in 2018, Exodus: The Journey Continues. In July, Once Upon a Time in Iraq, a two-hour documentary examining the Iraq war from the perspective of Iraqis, debuted on PBS.

The new series on the pandemic will be similar to Bluemel’s approach for his previous Frontline films, giving viewers a broader perspective than what’s happening in the U.S.

“This film is about the global issue. Therefore, America is just another country on the globe. Each country has dealt with it differently, and a film like this gives you an opportunity to have those direct comparisons,” he said. “America has a really important part to tell. But it’s probably wrong to say that the film would be skewed towards America just because it’s on PBS. It’s not. It’s definitely global.”

Aronson-Rath also said Bluemel’s approach to filmmaking will take viewers beyond policy issues by helping them empathize with the global struggle.

“My hope is that American viewers will understand how integral we are to the world and vice versa,” she said. “James always delivers on this front. He finds characters who are relatable all across the world.”