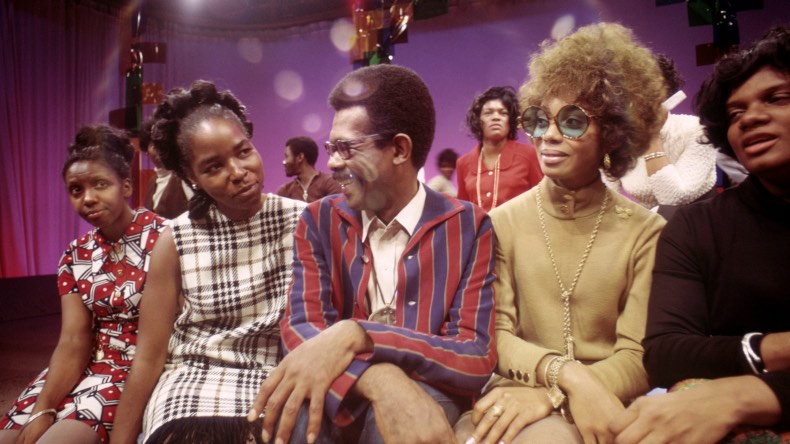 Alex Harsley, courtesy of Shoes in the Bed Productions

Ellis Haizlip, host and producer of "Soul!," sits with members of the J.C. White Choir following their mesmerizing performance on the program.

A documentary chronicling the pioneering television show Soul! will make its broadcast debut in February on Independent Lens, telling the story of a profoundly influential but short-lived public television series.

Mr. Soul!, a documentary nearly 10 years in the making, dives into the history of a variety show that brought Black artists and cultural figures to the emerging medium of public television. The documentary also profiles the show’s creator and longest-serving host, Ellis Haizlip.

During its five-year run, Soul! became “one of the most successfully and culturally significant Black-produced television shows in television history because … it provided expanded images of African Americans and shifted that white gaze away to the vibrancy of the Black arts movement,” said Melissa Haizlip, the film’s creator and Ellis Haizlip’s niece.

Soul! was a show that was “for us, by us, and so in many ways it paved the way for today’s Black television hosts and today’s diverse and inclusive programming,” she said.

The series aired until 1973, when CPB eliminated its funding.

Melissa Haizlip initiated the documentary to highlight Soul’s significance in television history and her uncle’s role in shaping it. As creator and host, Ellis Haizlip was a “pioneer in expanding the perception of African American culture” and giving “Black people a voice in television and in public media,” she said.

“He was kind of an unsung hero in this critical moment in American history, in Black history and in broadcast history, [and] has been overlooked,” she said.

Mr. Soul! features archival footage from numerous performances and dozens of interviews with guests who appeared on the show, staff who worked behind the scenes, academics and childhood friends of Ellis. Melissa Haizlip’s first interview for the film was in 2009.

During one interview sequence, Valerie Simpson and Nickolas Ashford discuss why their careers as the musical duo Ashford & Simpson wouldn’t have happened without Soul! The husband-and-wife team started out as songwriters for such artists as Aretha Franklin and Ray Charles. They performed their own music on Soul! two years before releasing their first album.

When Ellis Haizlip asked the couple to appear on the show, Simpson says in the film, “we weren’t performers at all.” But Ellis saw something in them “that we hadn’t yet seen in ourselves,” she said.

Beyond the show’s entertainment value and Ellis Haizlip’s ability to spot and elevate talented Black artists, he was “a quiet revolutionary,” Melissa Haizlip said.

The film points to his interviews with members of the Black Panther Party and the parents and spouses of Black revolutionaries such as Georgia Jackson, the mother of George Jackson, and Betty Shabazz, the widow of Malcolm X, after their deaths. Ellis Haizlip didn’t shy from asking difficult questions of his guests. An openly gay man, Haizlip pressed Louis Farrakhan, who went on to become the leader of the Nation of Islam, about the movement’s stance on homosexuality.

“Ellis was seditious, you know,” poet Sonia Sanchez says in the film. “No one’s ever said that about him. People will say things like, ‘Oh, he had a great vision, and he was a nice middle-class man.’ Right. He was seditious. That whole program was seditious.”

The show became “this platform for political expression and the fight for social justice,” she said, at a time when television “would neither accurately reflect nor positively portray a full spectrum of Black society. So, in a way, Ellis Haizlip ensured that the revolution would be televised, and the revolution was Soul!”

The film also highlights Ellis Haizlip’s efforts to bring greater visibility to Black women who contributed to the show. “That was not a coincidence,” Melissa Haizlip said.

Following his run with Soul!, Ellis Haizlip stayed on with the Educational Broadcasting Corporation, licensee of WNET, until 1981. He led production of a comedy-drama series set in a high school, Watch Your Mouth! After leaving WNET, Haizlip got involved in politics and later went on to direct special programs at the Schomburg Center for Research in Black Culture at the New York Public Library. He died of cancer in 1991.

Today Ellis Haizlip serves as an “excellent reminder” of the importance of representation in media, Melissa Haizlip said.

“It’s tremendously important to have Black people, people of color, in key decision-making roles throughout the media industry,” she said. “And you still don’t see that enough.”