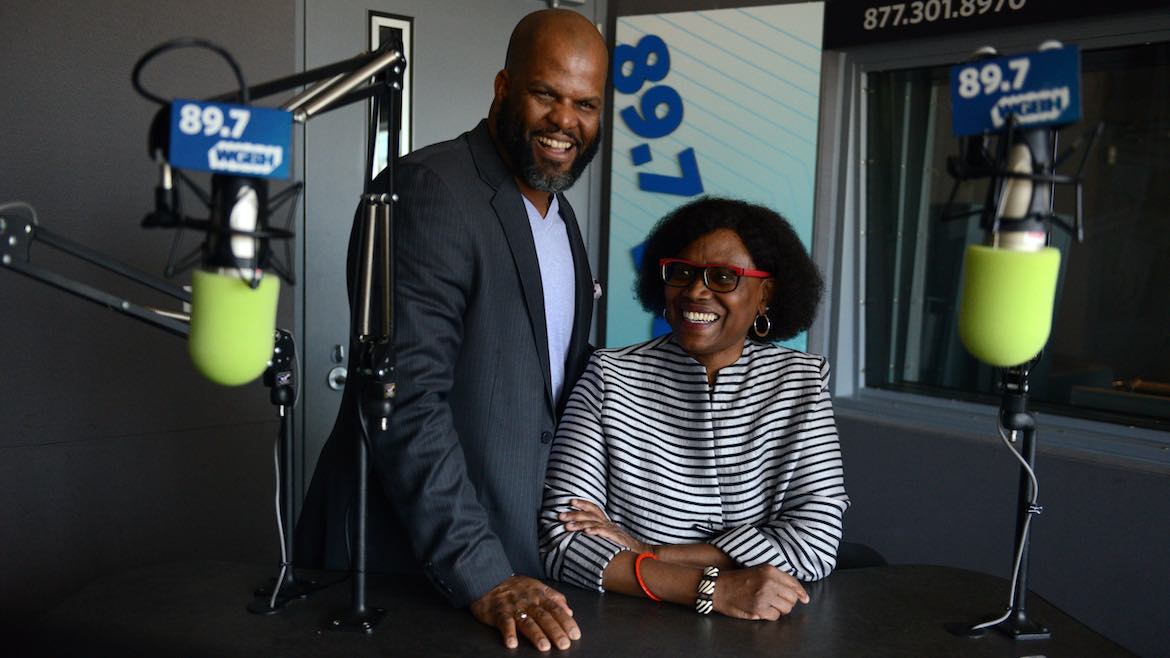 The Rev. Dr. Emmett Price and the Rev. Dr. Irene Monroe, hosts of GBH's "All Rev'd Up."

The two reverends who host a podcast produced by Boston’s GBH are looking to expand their audience with a second season, but they’re already reconnecting with a loyal fan base that has been anxiously awaiting their return.

“When we left off from season one, people were like, ‘Where are y’all?’” said the Rev. Dr. Emmett Price, who with the Rev. Dr. Irene Monroe hosts All Rev’d Up. “So from December literally to August … we had people writing in and actually tweeting us and posting on our own social media platforms, ‘We need to hear your voices.’”

When the podcast’s new season launched in August, the first episode earned more than double the downloads of any previous installment. The hosts attribute the jump in popularity to their beefed-up social media presence and a push to reach listeners beyond New England.

Timing is also a factor, said Nina Porzucki, managing producer of podcasting at GBH. “This summer has seen a huge rise in discussions around social justice and protest, and it’s in the ether … so I think that lends itself to creating a bigger audience,” she said.

Through the podcast, Monroe and Price aim to teach listeners and challenge hegemonic narratives about Blackness and religion. Price defines their mission as “to uplift a variety of expressions of Black tradition, of Black voice, of Black experience in a way that doesn’t diminish anybody else’s experience but allows us to speak fully into what we have to say.”

“One of the things that we consciously decided is to show the heterophony of Blackness,” he said. “Too many people think that Black folks are monolithic, that we all think alike, we all feel the same, we all experience life the same way.”

All Rev’d Up focuses on topics outside of the religious canon to show how religion can connect with politics and culture. Episodes in the new season have featured discussions about Kanye West and grieving during the pandemic.

“The faith that we have is like blood in our bodies; it’s part of the totality of who we are,” Price said. “We don’t necessarily need to turn it on and turn it off. We can talk about real life, and you’ll see the stream of faith come through that.”

“It throws folks off because when you have two Rev.’s show up to have a conversation, people think that you’re going to get some high, cerebral theological praxis,” he said. “And here we are, joking and laughing and being two real people. And I think that that’s what captures the audience that we have.”

An extension of ‘public theology’

All Rev’d Up started as a weekly segment of the same name on Boston Public Radio, a news and conversation radio show that airs weekdays on GBH. Monroe and Price met on the show in 2014. Their first appearance together led to a formidable friendship.

“I don’t just love Emmett,” Monroe said. “I love the type of man he walks in the world as.”

Monroe and Price still appear for Monday segments on Boston Public Radio, but their popularity prompted the station to give them a podcast last year. The reverends often could not delve deeply into their conversations in the time allotted for the on-air segments, Porzucki said.

“It seemed like a natural place to take it and give them a bigger platform with the podcast,” Porzucki said. “It’s not the same as radio. There’s not a strict timeline, and they can talk in more depth about certain issues.”

The station welcomed the idea of dedicating programming to conversations shaped by faith and spirituality. GBH VP of Digital Services Bob Kempf said that he has seen a lack of religion-centric programming in public radio and that station leadership enthusiastically accepted the idea for the podcast.

“It was like, light bulb goes off. Of course, to combine social justice, race, and spirituality or faith, that’s really interesting,” Kempf said. “And so to have that become part of what we’re supporting, we thought was really exciting.”

GBH incubated All Rev’d Up in its first season, helping to launch and distribute the show while it was still building an audience. For the second season, Monroe and Price have full editorial and creative oversight but continue to work closely with GBH on production, distribution and marketing. The second season will consist of 10 biweekly episodes, each under 30 minutes. The hosts are also posting videos of themselves recording the podcasts on YouTube.

Price and Monroe come from different religious and cultural backgrounds and carry out the duties of their professions in divergent ways. Price is the founding pastor of Community of Love Christian Fellowship in Allston, Mass. Monroe does activist work with the homeless, LGBTQ communities and interfaith communities in an “intersectional, anti-oppression, activism praxis,” she said.

“I had to think about doing what I call a public theology: thinking about it outside of the confines of the church,” Monroe said. For her, All Rev’d Up is a continuation of “public theology.”

With the podcast, Monroe said, she and her co-host hope to open up cultural and political dialogues that can be healing for many.

“[Religion] wants to free you from whatever burdens you,” she said. “We are a burdened nation, to say the least, right now, and we are hoping, without turning people off with religious language, to talk their language about some important issues.”