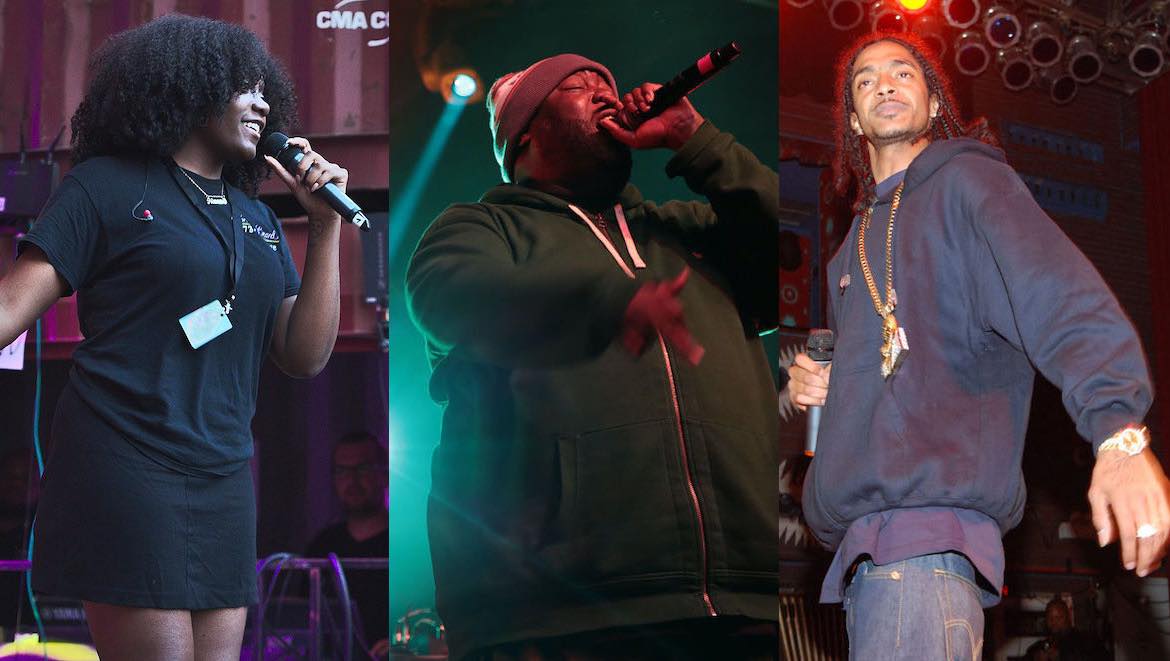 Noname, Killer Mike and Nipsey Hussle are among the hip-hop artists featured in "Louder Than a Riot."

Louder Than a Riot, a new NPR Music podcast releasing its first episode Thursday, explores the intersection of hip-hop and mass incarceration in America.

“From a large scale, what we’re really looking at is this interconnected rise between hip-hop and mass incarceration,” said co-host Rodney Carmichael, NPR Music’s hip-hop staff writer. “And that interconnection is something that we came to realize through working on this story.”

NPR Music writer and editor Sidney Madden also co-hosts Louder Than a Riot, a project the pair began developing in 2018. It is the first podcast either music journalist has hosted.

“We weren’t hired to be podcast co-hosts, but the potency of this idea and the strength of our combined opinions and our working relationship [is] that NPR saw the value in and wanted to take the step to make this thing real,” Madden said.

Before joining NPR Music in 2017, Carmichael reported and wrote on the intersections of culture, politics and hip-hop for Creative Loafing’s alt-weekly in Atlanta. Madden was on the editorial staff of hip-hop magazine XXL, where she contributed to feature stories and a major investigative project tracking the status of unsolved murder cases involving rappers.

“The best thing about journalism to me is that you learn something and then you share what you learn,” Madden said. “This has been a learning process for Rodney and I.”

Madden and Carmichael have been researching stories for the podcast for two years and recognize that the timing of its release may now allow it to have a greater impact. They could not have anticipated the widespread Black Lives Matter protests of this summer would create such awareness of racial inequities in the criminal justice system.

“America has awakened to this stuff that hip-hop has been rapping and raging about for 40-plus years,” Carmichael said. “And it seems like it’s a really interesting time to release a project like this, but I think it’s even more interesting to consider the fact that we saw the urgency around this even before this year happened.”

The 11 weekly episodes of Louder Than a Riot vary in focus and scope. Each delves into a different aspect of the criminal justice system through the history of mass incarceration and the lives of artists who have been directly impacted by the prison system and policing in America.

“We really wanted to draw a throughline and really investigate a lot of ways that hip-hop is kind of a microcosm for the Black American experience,” Madden said. “Especially when it comes to our experience with the criminal justice system and all of the tendrils of law enforcement and injustice that are kind of brushed off as ubiquitous at this point.”

The title Louder Than a Riot acknowledges the historic importance of hip-hop as a medium of expression.

“We wanted something that grounded the wake-up call happening in 2020 with the timelessness of hip-hop as a voice for the voiceless,” Carmichael said in an email. “Cause if ‘A riot is the language of the unheard,’ like Dr. King said, then rap is the definitive soundtrack.”

While delving into experiences with and details of incarceration, the hosts hope to also convey the subversive intellectual side of the hip-hop genre, Madden said.

“People learning more about the sociological prowess and genius of hip-hop when it comes to the lens of contextualizing mass incarceration in America — I think that’s something that would be a metric of success for me,” Madden said.

The hip-hop genre is more than a form of entertainment, Madden said. “It shows an insidious nature that a lot of people live under on a daily basis,” she said. “And hip-hop is our soundtrack to that.”

While the co-hosts hope the audience’s response to Louder Than a Riot will secure a second season, they also want the podcast to make an impact that can outlast its tenure.

“When you call out and you unpack and you dissect the things that we always just chalk up to, ‘That’s the way things are,’ that’s when things can change,” Madden said. “So I think [the podcast] coming out at this moment in history is incredibly fortuitous because it has a capability and a potential for greater impact.”

Correction: An earlier version of this article incorrectly said that the podcast will consist of 10 episodes. It will be 11 episodes.