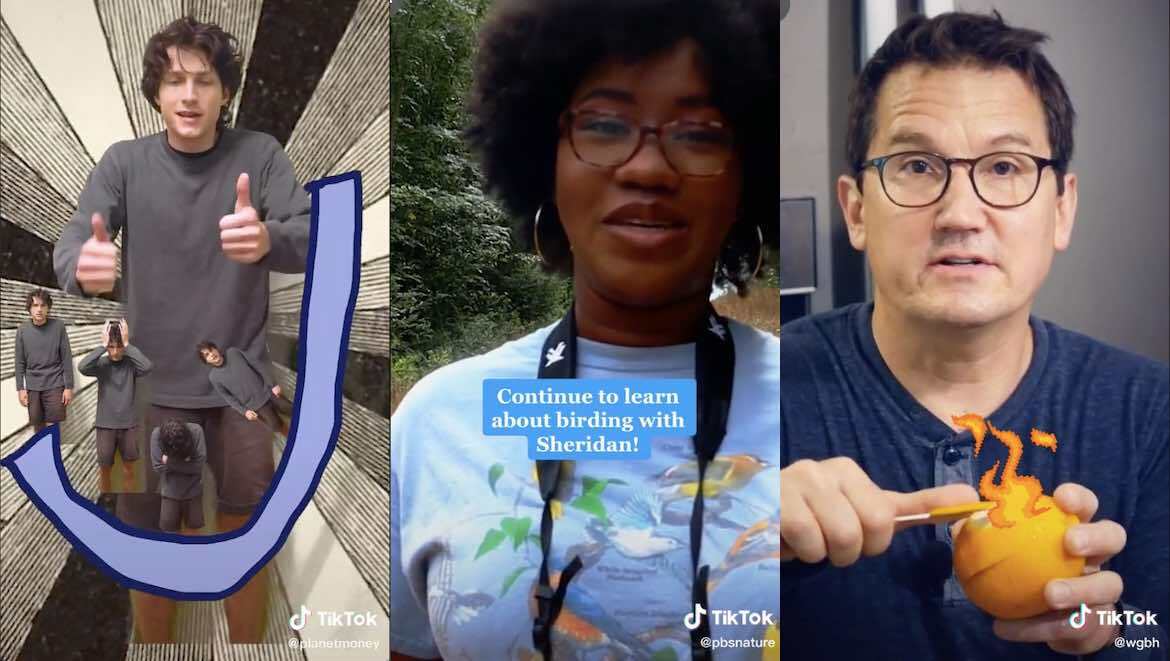 Can you teach an older institution new tricks? Producers in public media are testing just that by producing videos for TikTok.

NPR, WGBH in Boston and PBS’ Nature have all been experimenting with the social media platform in recent months. Each producer received a grant from a $50 million Creative Learning Fund, which TikTok established in May to help institutions and public figures produce educational videos on the platform.

Producers in public media say the platform is giving them a place to test ideas while also reaching new and younger audiences. Reuters reported last year that nearly 60% of TikTok’s 26.5 million active monthly users were ages 16–24.

NPR’s first TikTok star, Jack Corbett, has been getting attention for his TikToks created for the network’s Planet Money. In late April, Corbett created a video about the circuit breakers that halt trading on the stock market floor when the S&P falls. Corbett’s supervisors found the video hilarious and insightful and encouraged him to make it into a TikTok.

That got Corbett into producing videos in which he explains economic principles with absurdist humor, inventive graphics and an intentionally awkward style. He has changed outfits to play different characters, morphed in size and shape through the magic of visual effects and seemingly overdosed on coffee.

NPR’s video team has since produced 61 TikTok videos for Planet Money, drawing more than 135,000 followers on the platform. The most popular video, about inflation, has received 1.4 million views.

For ideas, Corbett and producers get tips from Planet Money’s team and scour previous stories for topics or terms that they can reframe using the platform.

“I just come up with ideas that I think are fun, and everyone else is incredibly encouraging,” Corbett said.

The videos have been a way to surprise viewers about NPR and its mission, said Alex Goldmark, senior supervising producer of Planet Money. Goldmark said he loves when people say in comments that they “are completely shocked that this is actual NPR.”

Producing TikToks for Planet Money challenges stereotypes associated with TikTok as an entertainment platform for teenagers, he said.

“You can actually use the platform for journalism,” he said.

Based at WNET in New York City, the team behind PBS’ Nature started producing TikToks because the show lacks an audience of older teenagers who have grown up watching, said WNET Education Director Sandy Goldberg.

“The PBS Kids audience is big, but that really stops at about age eight or nine,” Goldberg said. “So we’ve really been working on finding ways to reach that youth audience.”

The digital team creates TikToks by connecting visuals from Nature programs with an interesting topic or an educational curriculum, said Danielle Steinberg, lead of Nature’s digital team. The team for kids, media and education writes scripts for the minute-long videos; the digital team records narration and stitches together clips and music to create a cohesive video story.

Steinberg, who helps create the videos, said her role is to connect the show with a young audience by using innovative formats.

“The whole goal of this position is to sort of move Nature, I wouldn’t say ‘into the future,’ but I think just to catch them up,” she said.

The show’s TikTok account also features recurring segments with birdwatcher and Black Birders Week co-founder Sheridan Alford on “Birding 101.” Alford provides tips and tricks on observing birds with snapshots of birds and physical demonstrations of her participating in birding.

As of Tuesday, Nature’s TikTok account had more than 22,800 followers and their videos earned more than 137,000 likes. The show has planned TikTok production through Sep. 30.

WGBH in Boston also produced educational videos with support from the Creative Learning Fund. The station was already posting TikTok videos with behind-the-scenes footage from the station, including introducing a Frontline editor and the crew behind its televised High School Quiz Show.

In May it began producing more than 30 science-based videos through July 1 as part of a pilot program. Joanie Tobin, a senior producer on the station’s emerging platforms team, said that she and her team decided to make TikToks because they saw a “massive appetite for this emerging video format.”

The topic of science was a “natural choice” for the TikTok videos, Tobin said, because the station has a “really strong” science team and co-created PBS LearningMedia, which often features science-based content.

Producing TikToks has taught the team the importance of balancing education and entertainment, Tobin said.

“You really have to focus on the one piece of information you want to convey, and make sure to get it across in a fun and watchable way,” she said. “If the video isn’t entertaining, viewers won’t stick around to learn from it.”

WGBH doesn’t have an exact timeline for producing more videos, but the emerging platform team wants to start making more TikTok content in the fall, according to a spokesperson.