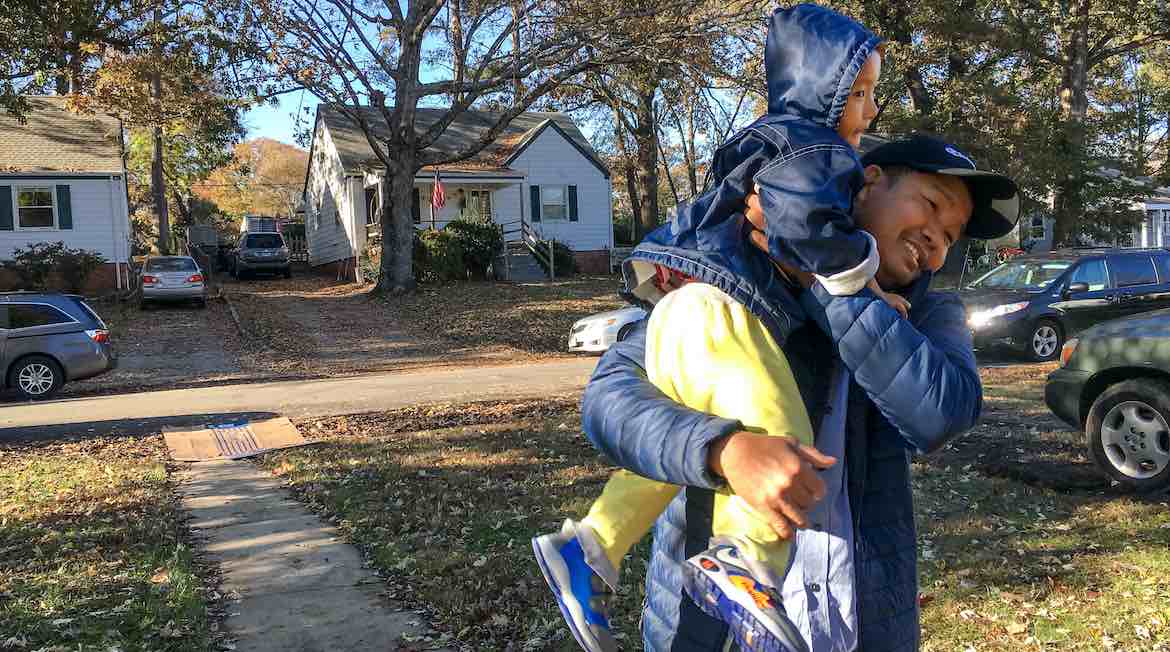 Zau Tu LahPai, a refugee from Myanmar who was featured on the first episode of "Resettled," holds his son.

Coverage of refugee communities, inside or outside of public media, has a predictable feel to it.

A media outlet asks a nongovernmental organization for sources. A few recently resettled refugees or their families become de facto spokespeople for refugees writ large. The stories focus on the process of adapting to American life and becoming part of their new communities. Few of the stories explore what happens after the formal resettlement period ends.

Ahmed Badr and the team at Virginia’s VPM saw an opportunity to change this paradigm. They worked together to produce Resettled, a six-part podcast series that premiered July 3. It aims to bring listeners inside the daily lives of refugees in central Virginia through interviews and audio diaries.

Each episode of the podcast focuses on a different aspect of refugee resettlement, including finding jobs, coping with mental health issues and becoming part of the region’s schools.

Badr and his family fled Baghdad after their home was bombed in 2006. They lived in Syria for two years before coming to the United States.

Angela Massino, VPM’s director of digital content, found Badr through his previous podcast, A Way Home Together, produced by the United Nations’ International Organization for Migration. She thought Badr could help the team check their own biases and serve as a bridge between reporters and the communities they were covering.

“I wanted to identify someone who is already tapped into the community and put them in a place of power to make decisions,” Massino said. “It was important for us to make sure that his voice was heard the whole time and that we followed his input in telling these stories.”

Resettled began as an NPR Story Lab project in 2018. VPM initially collaborated with Zarmina Wahidi, an Afghan journalist now based in Richmond, and Nazir Afzali, a former Afghan fixer who lives in Charlottesville. Massino said both provided early insight and direction on issues that resettling refugees are most concerned about.

Badr joined the project’s team in July 2019, working remotely with VPM while completing his senior year at Wesleyan University in Connecticut. At age 21, he is no stranger to storytelling projects. In addition to A Way Home Together, Badr was a leader in the “Unpacked: Refugee Baggage” multimedia exhibit and founded Narratio, a storytelling platform for young people.

When Massino first contacted him, Badr said he was impressed with how much effort had already gone into Resettled and the potential to bring refugee stories to a large audience through public media.

“One of the biggest things for me was to know that we would be treating these stories with justice and presenting them in the most honest and effective way possible,” Badr said. “That all came through when I met Angela and I saw how much care and thought she had already put into the project.”

Before working on Resettled, Badr was unaware of the large refugee communities in central Virginia.

According to Virginia Humanities, 3,500 refugees have been resettled in Harrisonburg since 1998 through Church World Services, making a noticeable impact on the city of just over 50,000 people. Richmond is home to several refugee resettlement nonprofits, including ReEstablish Richmond and an office of the International Rescue Committee.

“It goes to show that you can be doing something in a space for years and realize you still have so much to learn,” Badr said.

Badr and Massino were conscious about not applying a traditional extractive model of storytelling to this project — coming into a family or community, recording their stories, then leaving. Instead, they held storytelling workshops for refugees, attended community events and focused on telling stories in a more collaborative way.

This involved gathering and incorporating audio diaries and working with the community to shape storylines and incorporate feedback on episodes as they were being edited.

“My experience with a lot of refugee coverage is that journalists go into a camp as spectators and the people they interview never hear from them again,” Badr said. “The content is then presented in a sanitized way for an audience that will remain disconnected from it. I never worried that would happen with this project.”

Resettled is VPM’s third podcast and the first funded through the Virginia Foundation for Public Media, a foundation established in 2018 to support VPM and other public media projects. After completing the NPR Story Lab, Massino applied for and secured funding from VFPM.

Though working with an outside host added time and costs to the production, Massino said it was important to the project team to take the time to get things right and secure the funding necessary to do so.

“Our producer Maria grew up in Harrisonburg but spent her early childhood in the Philippines,” Massino said. Additional contributors, including Yasmine Jumaa, Saffeya Ahmed, Helen Zein Eddine, Nazir Afzali had “early input on who we should interview and why and what sort of topics we should zoom in on. Everyone was compensated for their time and input. Those early costs were quite a chunk of the budget, but I think it resulted in a more thoughtful product.”

Jumaa is a reporter at VPM, Ahmed is a researcher at CNN, Eddine is a Richmond-based freelance reporter and Afzali is a reporter for the CBS affiliate in Charlottesville.

Massino’s background is in community engagement, not journalism, which also shaped how the project came together. By engaging with refugee communities in an authentic way, the project team built trust and created excitement for the show as it was released.

“You’re building an automatically interested audience who feels invested in what you’re creating, rather than trying to put content out to them on the back end that they have no connection to,” Massino said.

This approach also meant yielding some of the power VPM held as a gatekeeper in deciding how information is presented to listeners. One example of that came in the podcast’s fourth episode, which tells the story of Dadi Neopaney, a Bhutanese refugee whose first job in the U.S. involves dressing in a Statue of Liberty costume to promote tax-filing services.

By involving Neopaney in the story and using his audio diary, the episode moved beyond the oddity of working as a dancing Statue of Liberty to reveal his deeper feelings about what the job meant to him and the irony he saw in wearing the costume.

“Any good producer, regardless of background, would see these stories as great openings, but it goes back to the choice of turning the lens on the listener through the perspective of a refugee,” Massino said. “I’m in a position of power, and I want to make sure I use it … to better work with the community to tell the stories in an authentic way with community feedback.”

Badr and Massino are not sure whether there will be a second season of Resettled or whether they’ll work together on future projects.

VPM’s next podcast is Seizing Freedom, which tells the stories of Black leaders during Reconstruction. Badr’s first book, While the Earth Sleeps We Travel, a collection of stories from refugees around the world, will be released Oct. 13 from Andrews McMeel Publishing.