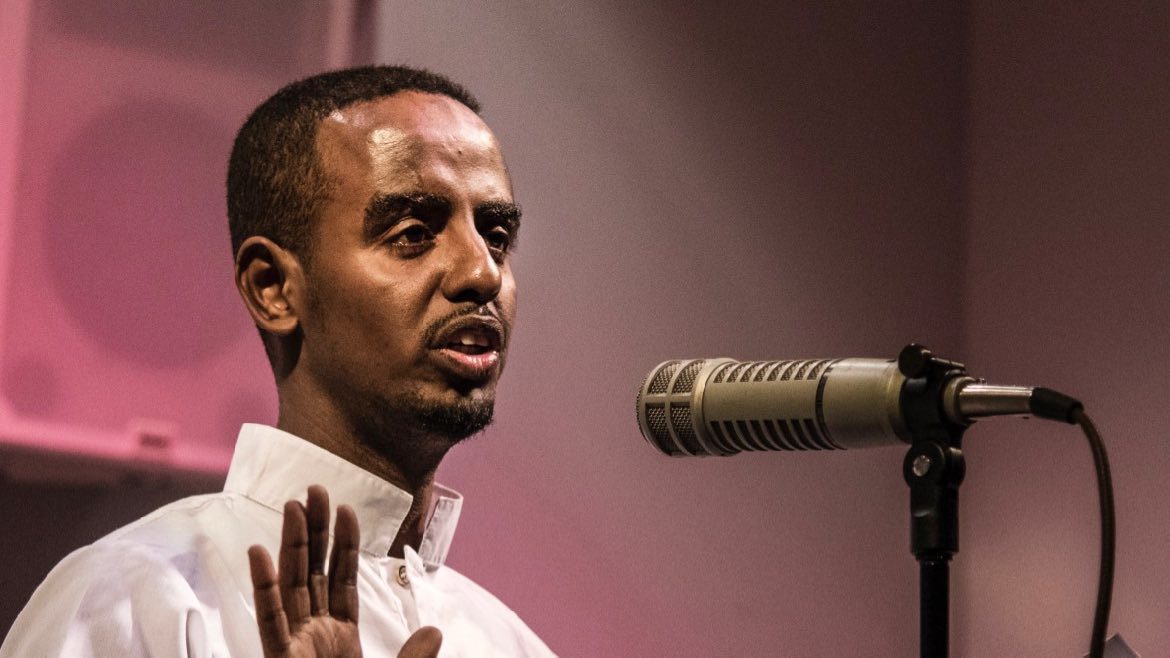 Mahamud Osman, a Somali refugee, speaks during "Ode: Stories without Borders," an event that featured the stories of immigrants.

A tiny public radio station in Iowa has tapped into a passion for personal storytelling through an event series that adds local voices to its on-air and online coverage.

Ode, a bimonthly storytelling jam put on by Siouxland Public Media, regularly sells out a 150-seat venue in historic Sioux City — a renovated 1890s steam boiler plant that serves as a studio for Iowa State University. ISU Design West hosts the events for free, and the station generates about $1,000 at each performance through ticket sales, said SPM’s General Manager Mark Munger. The stories are recorded and adapted for online arts features that air during Morning Edition.

Since its launch two years ago by founder Ally Karsyn, the station’s arts producer, Ode has boosted SPM’s profile in the community, expanded its social media following and attracted new partners.

Munger hasn’t been able to track the project’s impact on listenership or donations with hard data, but he sees many benefits. The average age of the audience at Ode events is significantly lower than Siouxland’s radio listeners, and many attendees have signed up to volunteer or participate in fund drives. Munger credits Ode’s success with helping him secure grants for two other projects, and believes it has helped improve the station’s on-air fundraising performance. 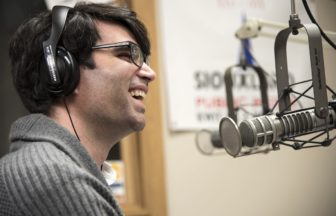 SPM has “kind of been a sleepy little station for quite a long time, with a lot of the same members,” Munger said. Ode has given it a new way to interact with different people in the community. “Today, just being on the radio dial isn’t necessarily enough. Being out in the community has been great.”

Ode won the inaugural “Local that Works” contest, a 2017 collaboration between the Public Media Futures Forum and Current to identify stations’ innovative and replicable local content and engagement strategies. Last fall attendees of the Public Radio Super-Regional Meeting cast votes to select Ode as the best among four local projects presented at the conference.

Siouxland’s entry focused on a November 2016 event, “Ode: Stories without Borders,” featuring the voices of immigrants. Siouxland partnered with local nonprofits — the Mary J. Treglia Community House, which assists immigrants, and the Sioux City Art Center — to stage it. The venue filled to capacity as locals gathered to hear stories of people in their midst who left one home for another.

The immigrant experience resonates with the people of Sioux City, where the meat industry has historically attracted workers from the around the world, according to Munger.

“Relatively high paying, low-skill jobs have drawn immigrants from Latvia, Poland, Germany, Ireland, Guatemala, Honduras, Mexico, Ethiopia, Somalia … making for a richly diverse landscape,” he wrote in a description of Ode. “Yet, given a look at our commercial media outlets and the dominance of traditional Midwestern restaurants and businesses, one wouldn’t know it.”

The response to “Ode: Stories without Borders” marked a turning point for SPM, Munger said. “We have heard over and over again from people who went to the event, or who later heard the stories broadcast, that they had no idea refugees were coming to our community. That the people who come here do so because they just want a safe home for their families. That [these people] are something other than what [we] see or hear on national news.”

At “Stories without Borders,” one woman recalled how her Indian father and Brazilian mother met on Sept. 11, 1976, in Brazil, and how the significance of that date resonated with her on Sept. 11, 2001, when she accompanied her grandmother to a citizenship ceremony in San Francisco. An Arab Israeli Green Card–holder from East Jerusalem described a childhood of violence and the struggle to pursue a medical residency at the University of Iowa. And a young girl from Ethiopia, who became pregnant as a teenager after she was raped at a refugee camp in Kenya, recalled how she moved to the U.S. to raise her child and finish high school with help from strangers.

Each event opens with live music then features six to eight storytellers addressing a common theme, such as adoption, mental illness, divorce or domestic violence. The theme for December was lighter, featuring stories of “Holiday Joy & Mayhem.” 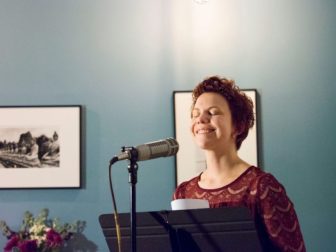 The audience runs from high-schoolers to retirees, but most fall between the ages of 20 and 40, Karsyn said. Judging from a show of hands she requests before each event, about half the people have attended previous Ode events, and about half listen to the station. “So you are reaching a new audience,” she said.

Broadcasting at 100,000 watts under the call letters KWIT, Siouxland’s signal covers a 100-mile radius from Sioux City, reaching into northeast Nebraska and southeast South Dakota. Siouxland also broadcasts on KOJI in Okoboji, a small city near the Minnesota border.

Ode events tend to draw attendees and storytellers from Sioux City, but some have travelled from as far as Sioux Falls, S.D., about 90 miles away, and Omaha, Neb., a distance of 100 miles. “Neither city has anything like Ode, and both are bigger than Sioux City,” Karsyn said.

Karsyn launched Ode as a personal project in January 2016. At the time, she worked as a reporter at the Sioux City Journal and produced events by herself for eight months.

“I would book the venue and find a local musician; manage social media and event promotions; conceptualize the themes; act as editor, storytelling coach and occasionally ghostwriter, to help community members craft their narratives,” said Karsyn. She also hosted and photographed the events.

“It was a passion project that consumed my nights and weekends. … Looking back, I don’t know how I did it.”

Karsyn, 28, is a native of Rock Valley, Iowa, a small town about 60 miles north of Sioux City. She fell in love with storytelling in 2011, when she was a college student living in Chicago. “You can find one or two of those events every week” there, she said.

Munger was working in a different job when Karsyn began Ode. He was SPM’s arts editor, and Karsyn talked him into a putting put Ode stories on the air. After Munger was promoted to GM, in August 2016, he quickly hired Karsyn to take his previous job and bring Ode in-house.

At first Karsyn had to scramble to find storytellers for Ode, and she often came up with stories of her own to fill out the program. Now she meets plenty of them in the audience. “Once people have experienced it and watched other people do it, they are more likely to volunteer,” she said. “People will come up to me after a show and say, ‘I would really like to tell my story.’” She has a flyer ready with pointers for storytelling and details about upcoming themes. 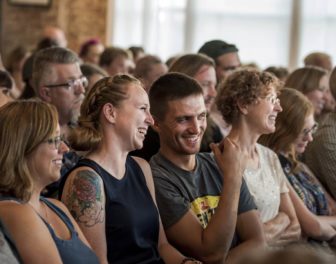 An audience at an Ode event.

Aspiring storytellers start by submitting pitches to Karsyn. She receives more ideas than she can use now, so can be selective about which to stage. “That wasn’t always the case,” she said, “In the early days I would take whomever and get it to the best point I could.”

After selecting stories for an event, she asks participants to submit a rough draft within two weeks. She helps them polish their pieces via email or during in-person meetings.

Unlike The Moth Radio Hour, Public Radio Exchange’s nationally distributed series, Karsyn allows Ode storytellers to read from scripts on stage. “You work with what you have. … It takes down that barrier, that people [don’t] have to memorize.”

Karsyn is working to build a stable of writers. Her days of taking the stage herself are over, but she he likes returning storytellers. Since managing a new set of people and personalities each time can be challenging, it’s nice be able to come back to the same people occasionally, she said. Still, she won’t schedule the same person in two consecutive events.

Ode’s Facebook posts can get significant mileage when she tags them to local storytellers. One story, “Ode: A Millennial Moves in with an 89-Year Old Widow,” by Emily Anderson, reached over 10,000 Facebook users.

The station has forged new community partnerships and promotions through Ode. The Siouxland District Health Department paired with Ode on a summer event that was staged in a community garden and featured stories about food. This year Karsyn is planning an event with One Book One Siouxland, a community reading program, under the storytelling theme “Just Keep Going”; another event tied to a community art project will deal with “belonging” as the theme.

Ode’s success helped Munger win new foundation grants. The M.A. Martin Everist Foundation awarded nearly $18,000 for Siouxland Arts Live, featuring live broadcasts of performances from partners including the Sioux City Symphony Orchestra, the National Music Museum and The Marquee, a local music venue. And the Gilchrist Foundation provided about $17,000 for the Siouxland Media Lab, a youth media training program created with local nonprofits for grade-school students from low-income and minority families. The students’ stories will be showcased at live events.

Ode “showed that people want this experience of being with other people, meeting people in their community,” Munger said. “I could write a grant saying, ‘There is an audience. This is how many people are coming out.’”

The biggest challenge now is finding a home for Ode that can accommodate bigger audiences — and retain that intimate feeling.

ISU Design West has brick walls and “that underground comedy club feel to it,” Karsyn said, but it’s hard for people to find. She has looked at conference halls and other local venues, and they don’t have the right vibe.

“I wish there was a space for 500 people,” said Munger. “We don’t really have a small theater, a midsize venue. … It’s a problem for communities like ours.”