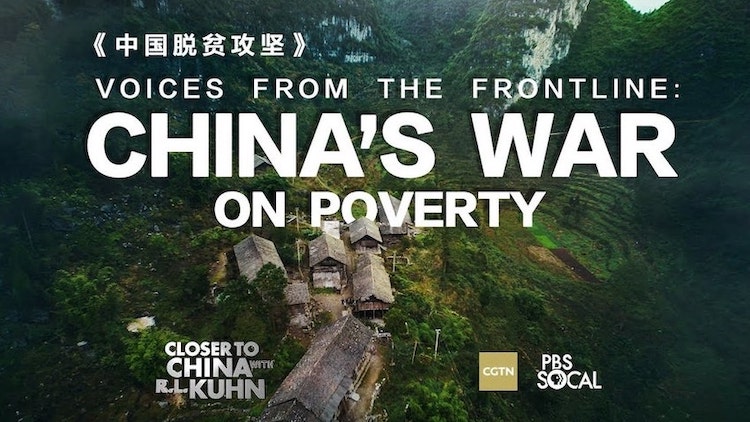 "Voices from the Frontline: China's War on Poverty" was co-produced by PBS SoCal and a foundation led by Robert Lawrence Kuhn in association with CGTN.

PBS SoCal has launched an internal review of a documentary it co-produced after PBS said the film failed to meet its editorial standards.

Voices from the Frontline: China’s War on Poverty was co-produced by the Los Angeles station and a foundation led by Robert Lawrence Kuhn in association with the China Global Television Network. Kuhn is an author, a former investment banker and the film’s host and writer. CGTN is operated by CCTV, a network owned by China Media Group, which is overseen by the Publicity Department of the Communist Party of China.

Kuhn’s foundation helps fund his films for public TV and has also supported PBS SoCal, according to tax filings. Kuhn, an expert on China, has worked on several public TV programs.

The hourlong documentary aired on PBS SoCal May 11 and 12 and on two other public TV stations. A description on PBS SoCal’s website says the show is “the inside story of China’s race to eradicate all extreme poverty by the end of the year 2020.” It says that “with unprecedented access, this film, as none before, embeds in China’s poverty alleviation campaign — tens of millions of poor families with customized plans, millions of officials recruited and held accountable. President Xi Jinping is counting on its success.”

The online conservative publication The Daily Caller first reported on alleged ethical conflicts with the film May 14, calling the documentary “pro-Beijing.” Fox News noted and linked to the Daily Caller’s story.

PBS notified PBS SoCal May 20 that it was removing the film from PBS.org, Passport and the PBS Video App, according to PBS SoCal CEO Andrew Russell. The network said the film did not meet its editorial standards, Russell said. The Los Angeles station notified two other stations that had already aired the film of PBS’ decision.

In a statement to Current, PBS SoCal said the film passed its own editorial standards as a presenting station and co-producer and adhered to FCC guidelines. But because of PBS’ decision regarding the show, PBS SoCal will review the show’s content and production “to validate our original decision to air the documentary.”

“The specific concern they had was around the funding and the funding relationship,” Russell said of his conversation with PBS. “They assured me that they did not find concerns in other areas of editorial integrity.” PBS SoCal made sure to recognize the film’s association with CGTN and Kuhn’s foundation in promotional materials and the film’s credits, Russell said.

PBS SoCal and sister station KCET will not reair China’s War on Poverty or stream it on their websites while the film is under review. Other stations can still air the program, and some have been planning to, according to PBS SoCal.

“Per PBS corporate, stations across the country who previously indicated interest in airing the program are encouraged to make their own determination on whether to continue to do so as part of Asian American Pacific Islander Heritage Month programming,” PBS SoCal’s statement said.

Idaho Public Television aired the documentary May 18. Vegas PBS aired it on an educational cable channel May 9 and 10 but not on its main channel. Neither station plans to rebroadcast the film.

After feeding the film to stations May 9, the National Educational Telecommunications Association has withdrawn the program from its catalog until PBS SoCal completes its review. In a statement, NETA VP of Content Angee Simmons said content NETA distributes must adhere to “public media’s accepted standards of editorial integrity,” adding that PBS SoCal “is one of our trusted members and has a long history of providing quality programming to the system.”

Kuhn, who hosted the documentary and led production, wrote last year in a column for CGTN that working with the Chinese network allowed his film crew “unprecedented access to travel across China.”

Adam Zhu, a longtime producing partner and vice chairman and EVP of Kuhn’s foundation, was EP for China’s War on Poverty alongside Michelle Merker, a program development manager for PBS SoCal. Peter Getzels, another longtime producing and directing partner with Kuhn, directed the film. The film won a bronze Telly Award in the general television category.

A clip from the film shows Kuhn interviewing Chinese citizens about their living conditions. Other parts of the film shows government workers teaching poor village farmers how to access microloans, diversify their crops and become better entrepreneurs.

“Today, in the Western world, especially in the United States, there is concern about China’s actions and suspicion of China’s motives,” Kuhn said in an interview with China Daily last year about China’s War on Poverty. “But one of the things I wanted this film to do was to undermine the stereotype of China as a ruthless giant out to dominate the world. It’s just not the case.”

The film is mostly positive in its depiction of the government’s plan to lift people out of poverty but does address some challenges and mentions complaints about corruption. One scene shows a heated conversation between a villager and an official arguing about the standards for determining who is poor.

Kuhn told Current that he has “absolute, unambiguous control” over his films’ production process and that the PBS SoCal version represents the team’s vision. But he noted that Chinese broadcasters have removed some parts of his films before airing them within the country. Chinese officials also edited out passages from the Chinese edition of a book Kuhn wrote about former President Jiang Zemin, he said.

Kuhn added that the process his production crew went through in China was not unique and that right-wing media outlets that may not approve of PBS programming or are anti-China may have singled out his film. Other producers, including the BBC, National Geographic and the Discovery Channel, have also worked on films with the Chinese government and are subject to China’s laws, he said.

He called it “a shame” that PBS removed his film from its platform due to what he called “extraneous internal political matters in the United States.” He added that China’s War on Poverty is not above criticism from audiences who may think the film’s ties to the Chinese government skewed its outlook. “That’s for the viewer to make an independent judgement,” he said.

Kuhn’s previous projects for public TV include Closer to Truth, a public TV series that debuted in 2000. The series focuses on scientific and philosophical debates about existence and the universe. Kuhn is also a writer, host and EP for the series. Other films created by Kuhn include Closer to China with R.L. Kuhn, which airs on CGTN.

Kuhn also hosts the The Watcher, another CGTN program, and created China’s Challenges, a series that aired in China and on PBS stations. China’s Challenges, an Emmy winner, was one of PBS SoCal’s most-viewed series in 2016. Shanghai Media Group, another government-owned Chinese company, co-produced that series.

Corrections: An earlier version of this article incorrectly said that CGTN was a co-producer of Voices from the Frontline: China’s War on Poverty. The film was produced in association with CGTN. The article also said that PBS SoCal was not aware of any stations planning to air the film. According to PBS SoCal, some stations have been planning to air it. In addition, it said Kuhn has worked on several PBS programs, but PBS distributed only one season of Closer to Truth as a Plus show in 2003.