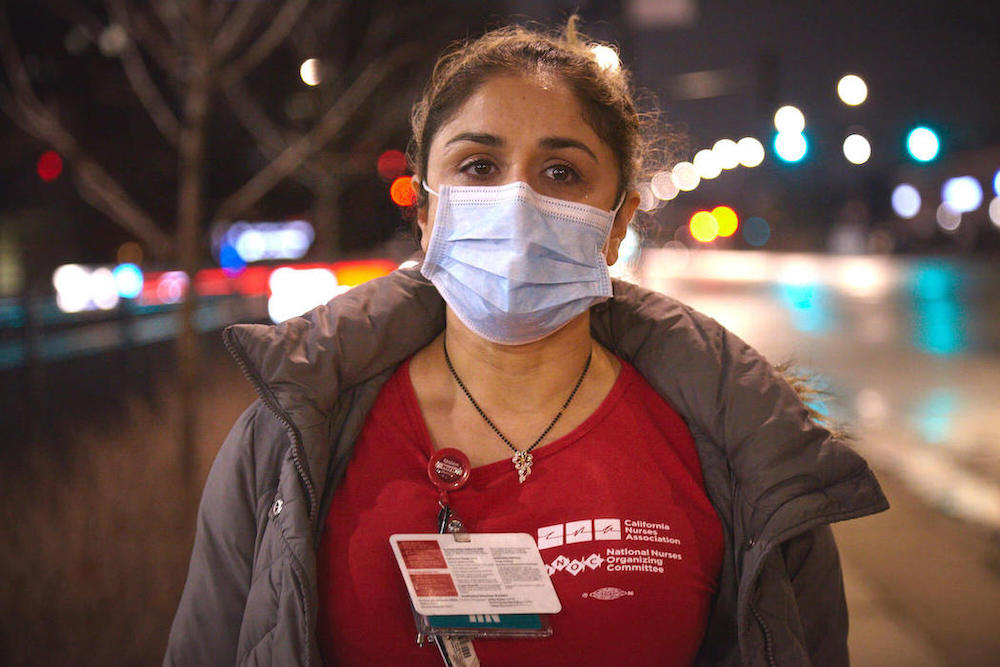 Falguni Dave, a nurse in Chicago, was profiled in WTTW's "Firsthand: Coronavirus" series.

When Hugo Balta began directing news as EP of Chicago Tonight, he did not suspect that his first months on the job would be spent covering a global health crisis.

“I’m walking on my third month at WTTW and if you were to have asked me in January how my first six months would go, I thought I would be just getting to know the team, observing and absorbing,” he said. “But then the second month this global pandemic hit, and things changed very quickly. I’m very fortunate and very grateful to be working with a team that’s experienced, talented and generous.”

Like many newsroom leaders, Balta has reorganized how his production team functions whilekeeping employees compliant with social distancing mandates. Brandis Friedman, Chicago Tonight’s co-anchor, still works out of the studio for the show’s broadcasts. But co-anchor Paris Schutz is reporting from different neighborhoods, like Chicago’s Little Village, Chinatown and Little India, as a field correspondent.

This is very different from pre-coronavirus episodes of the nightly news program. Schutz and Chicago Tonight’s correspondents and producers would gather in the studio to set up their prepared segments, usually with interviewees also present. Now that most interviews are conducted remotely via phone or video chat, WTTW’s studio has emptied, aside from Friedman, camera operators and other essential personnel.

“There are certain jobs that unfortunately you can’t do remotely, like Chicago Tonight,” Balta said. “So to have our main anchors Brandis and Paris separated was one of the first decisions that I needed to make.”

WTTW’s reconfigured production workflow is similar to those adopted by other public TV news operations that produce daily programs, including Arizona PBS, PBS NewsHour, Lakeland PBS in rural Minnesota and New York’s WNET and its sister stations. All of these news units have transitioned most or all of their staff to remote work. The abrupt changes have created headaches and unforeseen challenges that are being handled in real time.

No plan for pandemic operations

Leaders at Arizona PBS, which is licensed to Arizona State University in Phoenix, were forced to make major changes to the station’s news productions, including suspending the student-produced daily program Cronkite News, said GM Mary Mazur.

“As part of the university, we have a disaster plan in place and in fact we had just refined it,” Mazur said. But the plan assumed the station’s staff would be able to work from another building on campus and did not consider completely remote operations. “We thought of every disaster possible except pandemic,” Mazur said.

Students were on spring break during the week of March 8 when the coronavirus pandemic began to disrupt daily life in the U.S., Mazur said. ASU closed its campus, and students never came back for classes. Those who worked on Cronkite News became remote teleworkers, too.

With Cronkite News off the air, Arizona PBS expanded production of its flagship news show Arizona Horizon into a one-hour program, filling the open timeslot of the students’ program at 5 p.m. local time. The one-hour editions aired from March 16 to March 24, when the station began airing the international program DW News at 5 p.m. Arizona Horizon resumed producing 30-minute daily episodes.

“While the extra time of a full hour was helpful in the first couple of weeks, we’re finding that long-term, 30 minutes is the right fit for the show and our team,” said Katie Jones, associate editor, in a statement. “We are looking at scheduling some hour-long specials, however.”

“Things have moved so dramatically and so quickly. It seems like months ago, but really, it was weeks ago,” Mazur said.

To move the news team to remote work, the station started by taking “baby steps,” said Allysa Adams, EP of Arizona Horizon. Host and managing editor Ted Simons began anchoring the broadcast from his home March 26. For each show, he sits near a bookcase and in front of a banner with logos for Arizona PBS and Arizona Horizon.

Student producers and reporters from Cronkite News have continued to report and produce content remotely for their show’s website and YouTube. They also contributed to Arizona Horizon’s hourlong editions, Adams said.

Like Arizona PBS, Lakeland News has been stretched thin since the onset of the coronavirus epidemic. Its newsroom of about eight staffers relies on college students to help power its news operations, which serve rural communities in north-central Minnesota.

Since Bemidji State University moved to remote operations, fewer students are available to work on the show, said Dennis Weimann, news director for Lakeland PBS. There’s more work for a smaller news team, compounding fears of what will happen if someone gets sick. Lakeland News still originates from the station’s studio, but staff are following guidelines for social distancing. All interviews are conducted by phone or through video chat.

“Fortunately, we haven’t had anyone get sick at this point,” Weimann said. “We’re doing everything we can, but you just never know.”

Keeping Lakeland News on the air is especially important because few television stations within Lakeland PBS’ broadcast region produce news. “For people at home, they want the latest news of the stories impacting our area, and we’ve been able to provide that,” Weimann said. “We just had our first case of the coronavirus in our county, and we were the only ones in our state that covered it.”

‘It’s the number-one story in the world’

From a national perspective, PBS NewsHour has comprehensively covered the coronavirus pandemic for weeks, with Judy Woodruff anchoring the one-hour program from the studio at WETA in Washington, D.C. Producers are limiting the number of guests and reporters who appear on set. More interviews are being conducted through video conferencing platforms.

In addition to its evening broadcasts, the NewsHour produced a March 19 prime-time special on coronavirus featuring health experts. After producing one podcast on the pandemic, NewsHouris planning to do more, said EP Sara Just.

“We’ve done nothing but coronavirus on the NewsHour for several weeks now. That holds true for our digital content as well,” Just said. “It’s the number-one story in the world, and it’s our job to give insight into what’s happening and why it’s happening.”

News production units at WNET in New York, a regional public broadcaster with stations serving Long Island and New Jersey, have gone completely remote, said President Neal Shapiro. The stations were able to mobilize employees quickly because disaster plans developed after the 9/11 terrorist attacks informed station leaders’ conversations about what to do, he said. In the news units, Shapiro said producers are recording separate segments for programs such as MetroFocus. Elements of the program are later pieced together at CentralCast, the joint master control in Syracuse, N.Y.

“When you watch, it appears as if it’s playing as one continuous roll, but it’s not,” Shapiro said. “It’s different elements that we see up there,” he said.

Viewers of Amanpour & Company, a late-night talk show co-produced with CNN, and MetroFocus, which airs on all three regional stations, have sent positive feedback about the pandemic coverage even though the programs aren’t polished in the studio, Shapiro said.

“People understand that things aren’t going to look as perfect, but what’s most important is the information,” he said.

Ratings are up for MetroFocus, a daily show that relies on interviews, Shapiro said. In another case, Briana Vannozzi, a substitute host for NJTV News, is successfully anchoring the show from her living room and securing interviews with top public officials.

“If you had asked me weeks ago if we could do all of our shows without getting into our building and having no access to our master control, I’m not sure I would’ve said we could do it,” Shapiro said. “This is a huge, huge breakthrough, and I’m so proud of the team for making this happen.”

At WTTW, news producers have prioritized coverage of how COVID-19 is affecting Chicago’s diverse communities.

Producer/director Dan Protess has adapted the model for Firsthand, which debuted last year with a series of digital shorts profiling people whose lives were changed by gun violence.

Working from his kitchen at home, Protess and his team have produced eight installments of Firsthand: Coronavirus. Episodes published to date have featured a Catholic priest delivering Mass to parishioners virtually, a nurse living in isolation from her family while working 12-hour shifts, and a woman with cerebral palsy who cares for her husband, who is bedridden from a spinal injury. On March 30, Chicago Tonight aired a Firsthand segment about a homeless woman.

Protess works remotely with editor Ken Hall, producer Pat Odom and director of photography Kimmer Olesak. When Olesak and Odom are out doing field reporting, they wear masks and gloves and maintain as much distance from their interviewees as they can.

Finding people willing to participate as profile subjects has been difficult, Protess said. His request to interview a Chicago police officer was turned down. Another prospective subject didn’t want to bring a crew into their home during the pandemic. Still, Protess said, the process of filming and finding subjects remains fluid.

“The airplane is in motion at the same time that the mechanic is building the airplane,” he said.

Digital viewers appear to be gravitating towards stories about workers on the front lines, like a garbage man who says it’s his duty to keep working, Protess said.

Firsthand and Chicago Tonight are providing examples of coronavirus coverage that goes beyond reporting on and interviewing public officials, Balta said.

“It’s so important, especially in these moments of crisis, that we in the media do a better job of being diverse and inclusive. Too often we’re not really reflecting who we are as a city, as a community,” he said. “We’re not just going to scratch the surface. We’re going to provide in-depth coverage on topics.”