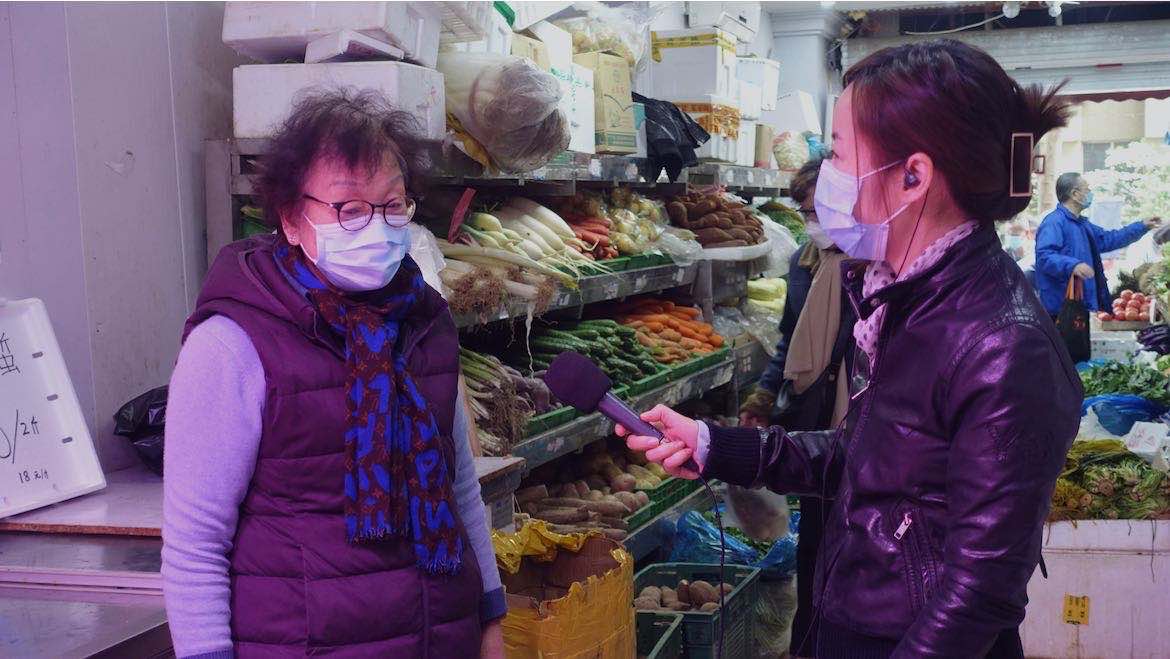 "Marketplace" China Correspondent Jennifer Pak interviews Shanghai resident Wu Lingmei, who says she will not dine at restaurants anymore because of the coronavirus outbreak.

“Any reporter will tell you that all they want is to go out and speak to people,” Pak said. She loves visiting sources’ homes and businesses, finding it fascinating that people “open their doors and their hearts and tell us everything.”

That’s not so easy in an era of social distancing. Security guards posted at practically every office, apartment building and shopping mall registered her name and passport number and checked for fevers. In a day’s reporting, Pak could have her temperature checked up to a half-dozen times and not see more than 10 people on the streets.

“A lot of it was just me, miking myself up and walking around and just explaining what was happening, so that I wasn’t necessarily talking to people,” Pak said.

Two months later, cars and pedestrians have returned to the streets of Shanghai, but Pak said masks in public spaces, daily office disinfections and fever checks are still in full force.

While U.S.-based journalists have adapted to remote reporting as social distancing has shut down American public life, international correspondents are making tough choices, like uprooting their lives to return home or braving the pandemic’s Italian epicenter in journalistic pursuit of the story.

Amid worries border crossings might close, Phoenix’s KJZZ brought two of its foreign correspondents to Tucson last month, where they’re continuing to report on the northern Mexican state of Sonora from afar. KJZZ Mexico City Bureau Chief Rodrigo Cervantes opted to remain south of the border because he has dual citizenship.

It’s a point of pride for News Director Al Macias that KJZZ opened a Mexico City bureau about four years ago to contribute to the station’s Fronteras Desk initiative, joined by a second Mexican bureau nearly two years ago in Hermosillo, Sonora.

“As far as I know, we’re the only local NPR station in the country with foreign bureaus,” Macias said, noting they provide Arizonan listeners with coverage they won’t get elsewhere. “With the people that we have [in Mexico], we’re able to cover a lot of the issues that do have a direct impact on Arizona.”

KJZZ pulled reporters Kendal Blust and Murphy Woodhouse out of Hermosillo just a few days before nonessential travel between the U.S. and Mexico ceased March 21. Macias said the reporters developed a good book of sources during their time in Mexico to continue reporting, even as safety precautions limit them to internet or phone calls across the international border.

These limitations are no different from the challenges facing many of the other journalists in KJZZ’s newsroom and around the country, Macias added. Although KJZZ’s foreign correspondents are itching to get back to Mexico, Macias said he’s prepared for his team to skip in-person reporting for weeks or even months.

“We want to make sure the risk of anything with the pandemic is, if not eliminated, at least minimized. We want to make sure all the other political and transportation issues are not up in the air,” Macias said, adding that Cervantes’ continued presence in Mexico City will give KJZZ “a good sense of what is going on from the Mexican government standpoint.”

Using recordings of action and ambient sound draws radio listeners into a scene, so Macias said his reporters have gotten creative. Deputizing National Guard members to gather cellphone recordings as they delivered food boxes was one way to add a little flavor to a story when the reporters couldn’t get into the field.

In Shanghai, even Pak’s own radio turned into a source of ambient sound as she socially distanced at home. Callers turning to local radio stations to discuss community issues helped Pak stay in touch.

“The radio was my window to the world because I wasn’t really talking to many people on the streets,” Pak said. “During times like a virus outbreak or any kind of disaster, there is a wariness of speaking to the media because if later on it becomes not OK, then they worry that they might get punished.”

Pak has relied largely on phone interviews with sources she already has a relationship with or networking through friends to continue her reporting for Marketplace. She found that she could get reluctant people on the street to talk by stepping away and recording herself repeating their answers, keeping them officially off tape while also maintaining a safe social distance.

“Be creative. There are other ways to go about it. You don’t have to be stuck to what was supposed to be,” Pak said. “As a journalist, you’re supposed to explain what’s going on in the world, and that is exactly what’s going on. People are fearful, so if they’re fearful, then you need to respect that.”

Boston-based Frontline’s filmmaking crews were scattered across the globe in England, Kazakhstan and Germany with others en route to Iraq and China when it became clear coronavirus was bearing down on Europe and North America. Executive Producer Raney Aronson-Rath said her team scrambled to bring them home around March 12.

“We were making decisions that we didn’t know how they would turn out, but I did know that it was the safest way to go,” Aronson-Rath said. “What we’re doing is making documentaries, but we really, first and foremost, have to keep our teams and our producers and directors safe.”

A member of Frontline’s podcast team in the United Kingdom contracted COVID-19 shortly after arriving in the U.S., but Aronson-Rath said “she’s doing great now.”

The rest of Frontline’s team has lost no time in pivoting to film documentaries examining the U.S. response to the pandemic, with teams embedded in Seattle hospitals and homeless shelters in Ohio.

Sasha Achilli, a Frontline producer who resides in the U.K., managed to squeeze in five days of filming in northern Italian hospitals only because police couldn’t turn her away at the border as an Italian citizen. The European country has become the global epicenter of the coronavirus pandemic, with Italian police requiring papers of civilians to justify why they’re allowed outside.

“I feel as safe as I can be. I’m not scared, but I am fully aware of the possibility of being infected,” Achilli told Aronson-Rath in an episode of Frontline’s Covering Coronavirus podcast. “We have to wear masks and gloves. We are using hand sanitizer on our gloves continuously, on our hands continuously. … It’s a deeply uncomfortable way of working.”

Frontline’s team has shifted some reporting online through Skype, but they’ve developed a multiple-page security protocol to protect both filmmakers and subjects. Aronson-Rath said it boils down to keeping a safe distance and wearing protective gear when in the field.

“Safety comes first, and cinematography comes second,” Aronson-Rath said. “The most important thing right now for us as journalists is to tell this story and to hold people to account for the questions that we have.”

Frontline producers have covered Ebola outbreaks and reported from war zones, which she said makes them well-prepared to cover the coronavirus pandemic. What Aronson-Rath doesn’t want to happen is for them to lose track of the “enduring stories we still need to tell” about topics like climate change and government misdeeds that may go unnoticed while everyone is focused on coronavirus.

One benefit of social distancing is many people have more time to explore Frontline’s online content, so Aronson-Rath said the show’s online viewing and podcast audience remain strong. She added that it hasn’t yet seen a negative financial impact from donors spooked by the erratic stock market and stumbling economy.

“People are looking for things to watch that are edifying and educational, so I think people are turning to Frontline for that reason,” Aronson-Rath said. “This is another example where fact-based journalism matters.”

PBS will air Frontline’s reporting on the coronavirus pandemic in Washington state and Ohio as a two-hour special April 21. Achilli’s documentary from Italy will air in May.