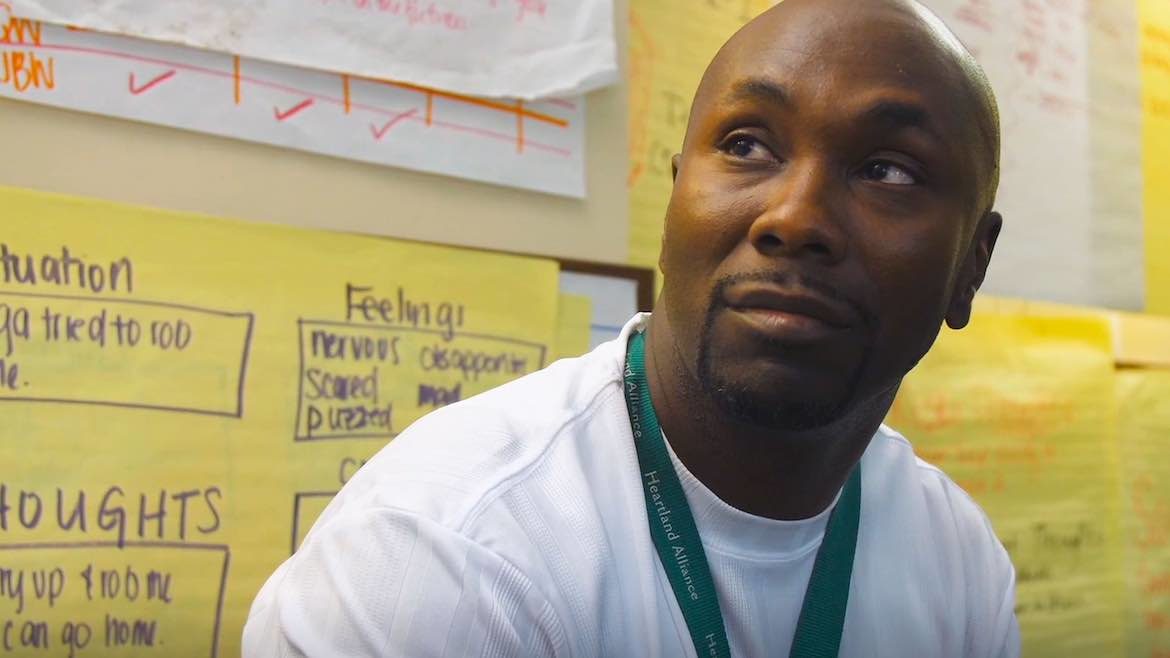 Reality Allah, a former gang member who now does outreach work to prevent gun violence, is one of five Chicagoans profiled in Firsthand.

Chicago’s WTTW has launched an ambitious content initiative examining the devastating personal toll that gun violence takes from its victims.

Firsthand: Gun Violence is anchored by documentary profiles of five Chicagoans: two grieving mothers, a traumatized high school student, a shooting survivor and a former gang member who now does outreach work with men at high risk of violence.

“The idea of it is that there is no shortage of stories on gun violence, but they are almost like coverage of sports — how many homicides there were the night before,” said Dan Protess, producer/director of Firsthand: Gun Violence. “You’d never know the human beings who are impacted — even people who pulled the triggers.”

The project deliberately steers clear of law and politics, Protess said, seeking to immerse viewers in the tragic arcs of victims, perpetrators and those close to them in a city with high rates of fatal shootings and other gun-related crimes. So far this year there have been 1,958 shooting incidents affecting 2,383 victims as of Nov. 24, according to data provided by the Chicago Police Department. The police have recorded 452 murders within the same time period. The department doesn’t break out the number of murders committed by gun, but a spokesperson said a great majority are gun-related.

These year-to-date numbers are lower than data reported during the same period last year: Shooting incidents have dropped by 9%, and the number of victims by 8%, extending declines in gun violence and the homicide rate since 2016, when police reported a total of 777 murders over all 12 months.

“The huge spike in 2016 really horrified everyone in the city, and the numbers have gotten better since then,” Protess said. He thinks the reduction in gun violence makes Firsthand’s coverage even more important for keeping attention on the problem. “It’s easy to get lulled into a sense of complacency.” With 452 murders so far this year, there are still that many people whose families who are bereft and potentially traumatized.

Firsthand’s digital coverage combines multiple strands of content that build upon each other. A series of companion articles from The Trace, a nonprofit news site covering guns and gun violence, uses stories from the documentary profiles as starting points for in-depth reports on related issues, such as housing and trauma. In Firsthand Talks, a series of short videos, local experts propose solutions. The station is also producing a series of solution-centered community events and distributing a discussion guide to help organizations plan their own events.

The profiles, filmed from May through August, are available on WTTW’s website, through the PBS video app and on PBS.org. Each documentary is split into three parts and designed for a binge-watching experience. WTTW published all 15 videos simultaneously Nov. 12.

“I was very intentional about building suspense at the end of each segment to encourage viewers to stick with the series,” Protess said.

To share the digital series on social media, Protess also produced 10-minute condensed versions. “We’re in a media environment where many viewers aren’t willing or able to commit to watching a 2½-hour documentary at one sitting,” he said. The shorter films can also be screened at community engagement events and in classrooms.

The videos profile 29-year-old Jsaron Jones, who still carries a gun even after suffering a crippling gunshot wound. India Hart is a high school senior navigating PTSD after her father and uncle were shot. Julie Anderson’s son Eric is serving life in prison without parole for two murders he committed at 15. Naomi Martinez’ son Andy was murdered 15 years ago.

“We live in a world where people say, ‘I never thought it would happen to me.’ It’s awful but seems very distant,” he said. “Particularly in a city like Chicago, which is highly segregated racially and economically, and where gun violence takes place in pockets of the city where decision-makers, people of power, rarely go.”

He tried to find stories that offer hope, like Reality Allah’s work with READI Chicago. Anderson, the mother whose son is incarcerated, advocates on behalf of prisoners and their families. Martinez, whose son was killed in a shooting, works for the organization Chicago Survivors, which provides immediate crisis-response services and support groups to victims and their families.

“I was worried about there not being any solutions offered,” Protess said.

Not just ‘drop in and drop out’

News site The Trace gave Firsthand access to another key medium — “text” — Protess said. Its team reported five articles connected directly to stories in the video profiles and produced a separate report on Chicago Mayor Lori Lightfoot’s complex record on gun violence six months into her term. In a cross-publishing arrangement, The Trace ran its Firsthand stories on its own website and social media channels.

Protess met Ben Freskos, a reporter for The Trace, at an event held by a Chicago violence prevention organization. “I gave him a ride home and said, ‘We’re doing similar work; we should get together,’” Protess said.

Miles Kohrman, The Trace’s editor for special projects, said the nonprofit news organization paid for all of its reporting.

Kohrman said he admires WTTW’s engagement with the topic. It’s “not just drop in and drop out,” he added. “They are committed to being smart and strategic about how they distribute it on an ongoing basis and get feedback from the community. We’re excited to see where it goes.”

“We started talking about doing some sort of multipronged initiative built around social issues, with the hope that we could really make a difference in the communities we serve,” Micek said. The broadcaster’s Community Advisory Board was particularly keen on addressing gun violence.

“It’s of interest to people in Chicago, but also nationally,” she said. “It’s the kind of content and storytelling that lends itself to multiple platforms.”

Anne Gleason, WTTW’s senior VP of marketing and interactive media, led development and production of Firsthand as EP. The initiative was funded in part by The Grainger Foundation, Allstate Insurance Company, The Chicago Community Trust and major gifts from individual donors.

The initiative will continue through next fall, according to Julia Maish, WTTW spokesperson. Following this month’s launch and rollout, its second phase focuses on distribution of Firsthand materials into schools, community-based programs and prisons. A broadcast launch is in the works, she said, and the station will do a full evaluation of its impact before deciding next steps.

If the model works, Protess said, WTTW could potentially use the Firsthand brand to produce coverage of other hot-button issues.