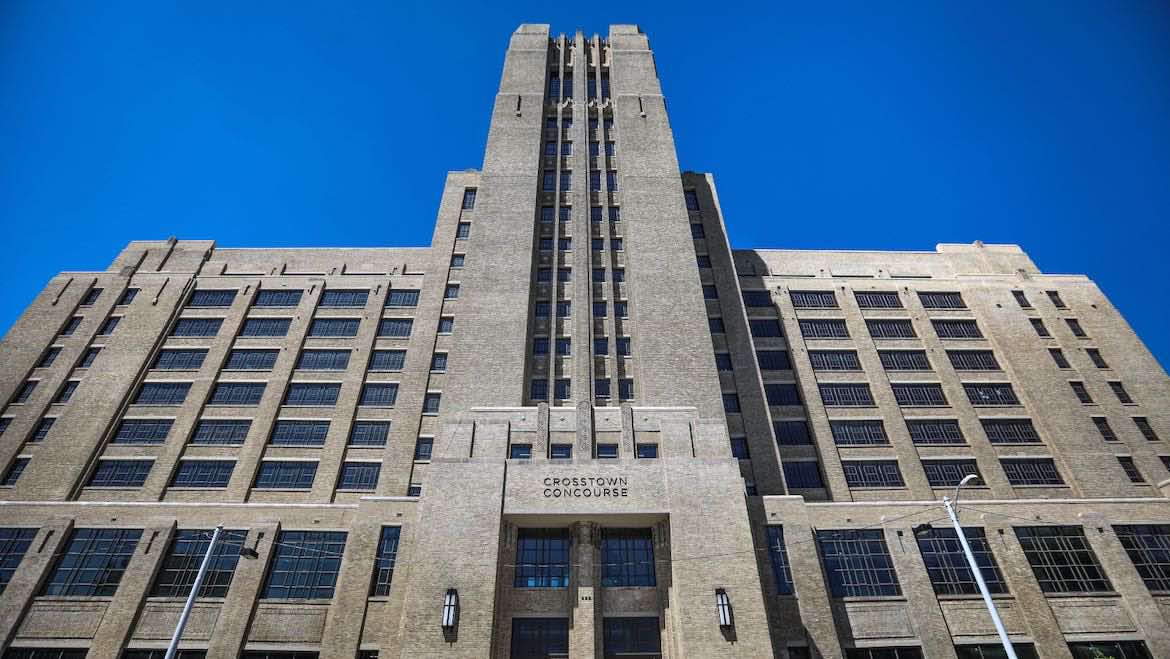 Memphis' WUMR will be moving into the atrium of Crosstown Concourse, a mixed-use development in a former Sears warehouse.

Big changes are in store this year for Memphis’ only all-jazz radio station as it prepares to revamp its music mix, add local news and move this spring from a university basement into the towering 10-story atrium of a repurposed Sears distribution center.

Last month, the board of trustees of the University of Memphis agreed to transfer the license of on-campus WUMR to Crosstown Radio Partnership Inc., a new nonprofit organization. The university is teaming up to run WUMR with The Daily Memphian, an online-only news startup, and Crosstown Concourse, a mixed-use development opened in 2017 in a once-blighted Sears warehouse in northern Memphis.

University leaders arrived at the partnership to keep the station alive following a yearlong review that determined “The Jazz Lover” was not financially sustainable after 40 years of spinning jazz across Memphis’ airwaves. Financial records show the university spent over $121,000 on WUMR in fiscal year 2017, the most recent year of budget data available.

“A lot of universities have made the decision to just get rid of the FCC license and shut it down, and we didn’t want to do that,” Anne Hogan, dean of the University of Memphis’ College of Communications and Fine Arts, told Current. “This is a way for us to maintain the ability for our students to be involved in a radio station, and a radio station that is going to be … a 21st-century entity that has all of those elements of streaming, podcasting, the terrestrial radio station and everything that is current about the ways that people relate to radio.”

The university and its partners are still resolving specifics of the partnership as Crosstown Concourse seeks an executive director to lead the new venture. U of M, The Daily Memphian and Crosstown Concourse will all have representatives on the new nonprofit’s board. Hogan said the university will hire an instructor to oversee and develop students’ participation with the station through classes and internships or as an extracurricular activity.

With the change, WUMR’s volunteers will begin playing other genres to more broadly represent the community’s tastes, according to Hogan. Jazz will remain an important segment of the revamped programming, but listeners can expect to hear hip-hop, R&B, pop, country, classical and more.

Hogan said she’s most excited about the opportunity to livestream students’ musical performances from Crosstown’s performance space and from a 900-seat auditorium under construction at the university’s new School of Music.

“Memphis is a music city,” said Robby Grant, who served as Crosstown Concourse’s artist-in-residence last year and has been overseeing WUMR’s transition. Grant said he anticipates that the new station will feature a block format of about 80% music and 20% news updates and podcasts provided by The Daily Memphian. To him, community radio is a way to enhance a city’s creative community and allow for the discovery of local musicians and new music.

“In ’85 or ’86, I did an acoustic version of a Beastie Boys song, and [WUMR] played it, and I thought I’d made it,” Grant said. “Even grown folks like to hear themselves on the radio and like to promote what they’re working on.”

The Crosstown Radio Partnership will rely on The Daily Memphian’s 35 journalists to add local news into the mix. CEO Eric Barnes said his organization still needs to determine the exact schedule and frequency, but he anticipates his reporters will provide brief news updates throughout the day along with The Daily Memphian’s existing podcasts on public affairs, politics and food.

The Daily Memphian launched its online-only operation in September 2018 as a response to layoffs that gutted the staff of Memphis’ newspaper, The Commercial Appeal.

“You started to see a lot of stories from Knoxville and Nashville in the Memphis paper and vice versa. It really, really just drove a lot of people crazy,” Barnes said. “Locally, people got very concerned that they were going to continue to cut.”

Around that time, the University of Memphis founded its Institute for Public Service Reporting with The Daily Memphian as the exclusive publishing partner of its investigative reporting. The new radio venture stemmed from that relationship, Barnes said. He sees public radio as a low-cost way for members of the community to get high-quality news and information.

“It’s a way for The Daily Memphian to reach even more people in Memphis with the news and content we’re producing in a really efficient and effective manner and fill some of the gaps for access for people who can’t afford a paid subscription to us,” Barnes said.

Women and African-Americans make up majorities in Memphis’ population, so Barnes pointed out it’s imperative that the new WUMR include a diverse array of community voices in both its musical choices and news coverage. The station’s 25,000-watt signal stretches for a roughly 25-mile radius around Memphis and into northern Mississippi.

“It’s about being intentional and talking about it and making that a core value that we constantly repeat and emphasize in terms of who we hire, who hosts shows, the issues we cover,” Barnes said. “It’s not any one reporter who needs to embrace the importance of diverse voices and their stories; everybody has to embrace diverse voices.”

A ‘meeting place over the airwaves’

WUMR will continue in its current all-jazz format until late spring, when it will move into studio space in the Crosstown Concourse atrium currently occupied by a podcasting network that plans to move across the street. With an estimated 2,000 to 4,000 people passing through the central hub daily, Grant points out that the revitalized 1.1-million–square-foot Sears warehouse has become a community gathering place with frequent cultural events and plentiful retail options, office space and residential apartments.

WUMR’s call letters and branding will change, but Grant said it’s too early to know what they might become.

Hogan declined to share financial details of the Crosstown Radio Partnership but said it puts WUMR in a sustainable position for years to come.

“We are training students to thrive in professions that we can’t even imagine what they might be like [in the future],” Hogan said. “As things like new formats for radio stations and new technologies evolve, we need to be at the forefront of that and make sure that our students are involved in that.”