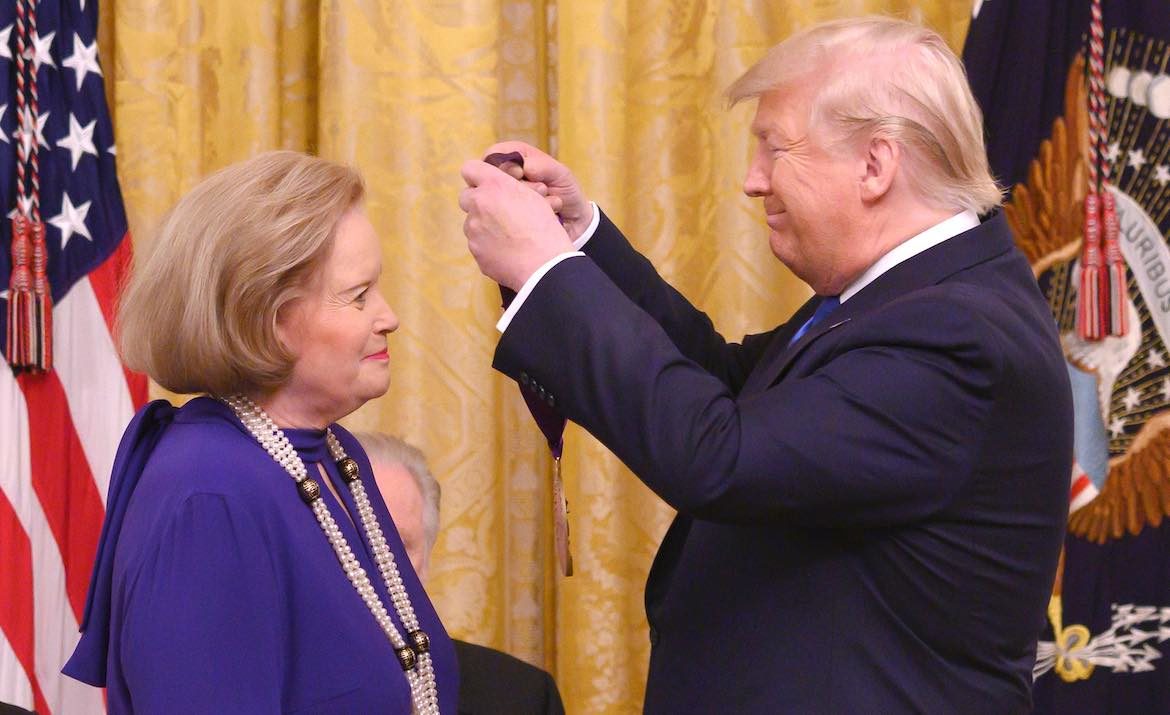 WASHINGTON — Sharon Percy Rockefeller, a philanthropist and arts patron who leads  one of PBS’ top producing stations, received the National Medal of Arts from President Donald Trump during a White House ceremony Thursday.

As president and CEO of WETA, the public broadcaster serving the nation’s capital, Rockefeller has guided signature PBS series such as PBS NewsHour, Washington Week in Review and Finding Your Roots. She also works closely with Ken Burns and his colleagues at Florentine Films to bring landmark documentaries such as Vietnam and Country Music to air.

The White House’s announcement of this year’s medalists recognized Rockefeller as “a renowned champion of the arts, a generous supporter of charity and a pioneer of new ideas and approaches in the field of public policy.”

Rockefeller has been a supporter of the National Gallery of Art since 1990. She joined the gallery’s board of trustees in 2005 and has served as chairman since 2013. She also serves on the board of the Museum of Modern Art.

Rockefeller was among four medal recipients honored this year. Actor Jonathan Voight, bluegrass and country musician Alison Krauss and the musicians of the U.S. military were also recognized by the president. Medalists are recommended to the president by an advisory committee of the National Endowment for the Arts.

“It is my immense privilege to present our nation’s highest honors for contributions to American art and culture,” said Trump. “Please join me in congratulating each of today’s recipients on their really, and I mean truly, phenomenal achievement.”

In recognizing Rockefeller, Trump described her as “a strong advocate for the arts and public broadcasting. She helped establish WETA as one of the preeminent public broadcasting networks in the nation, producing PBS Newshour and Washington Week, among other programming.”

The president then quipped, “Now, maybe, I’ll start getting some good publicity on those particular shows. … Could you please start working on that, Sharon?”

Rockefeller smiled as the observers laughed at the president’s remark.

“They tend to be on the other side of things, a little bit,” Trump added. “I think now I have a better chance.”

“We thank you for enriching the lives of millions, and I want to thank you very much for being here, Sharon,” Trump said. “Great job.”

Rockefeller said she “didn’t know what to expect” from President Trump while he presented the medal, but “had been advised that he would have some commentary during the ceremony.”

She described the comment as the president’s “attempt to be amusing.”

The White House event included presentations of National Humanities Medals, which are awarded in consultation with the National Endowment for the Humanities. This year’s recipients were chef Patrick O’Connell, philanthropist Teresa Lozano Long, the Claremont Institute and James Patterson, an author and literacy advocate who created the American Public Television-distributed children’s series Kid Stew.

In an interview, Rockefeller said she learned she had been selected for the award about two weeks ago.

She began supporting the arts in West Virginia as chair and founder of the Mountain Artisans, a quiltmaking group that highlights low-income artisans, according to a biography provided by WETA.

Rockefeller said she became involved with public broadcasting as a lay leader after meeting WETA founder Elizabeth Campbell. During the Carter administration, she was appointed to the CPB Board, where she served as board chair from 1981–84. As president of WETA, Rockefeller later served on the PBS Board.